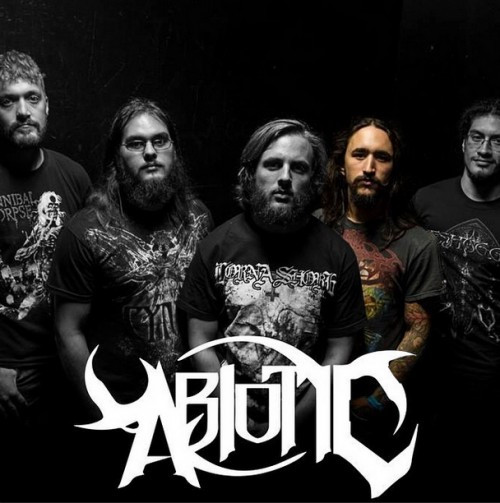 (Our Kansas-based friend Derek Neibarger — the man behind the Godless Angel death metal project and the inventor of the Cat Hand Rest©, brings us his interview of Johnathan Matos of Abiotic.)

April 21st was a great day for technical death metal fans as it brought us the release of Casuistry, the second full-length album from Florida’s Abiotic. Built around furious yet intricate riffs riding atop a pounding and swirling rhythm section and featuring the recording debut of vocalist Travis Bartosek, Casuistry is as complex as it is crushing while still managing to be melodic and catchy.

I recently caught up with guitarist and founding member, Johnathan Matos, to talk about the new album, new band members, and breakfast.

Derek: Hi John! Thank you so much for taking the time to answer my questions! Abiotic just released Casuistry, your first studio album since 2012. How would you compare the recording sessions for the new album to those for Symbiosis?

John: Yo Derek! Anytime, brother! We were definitely more prepared than we were for Symbiosis and we’re just in a totally different mindset as a band. Jamie King produced the record and did an amazing job! I feel he was really able to hone in on the sound we were looking for. 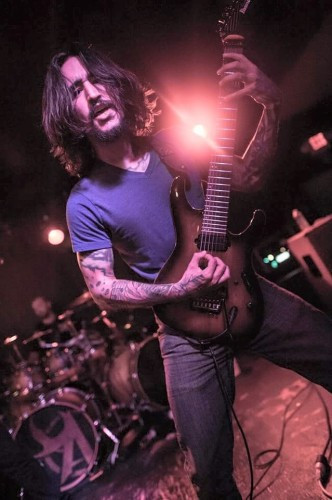 Derek: The new album marks the recording debut of vocalist Travis Bartosek and drummer Brent Phillips. How did they come to be a part of Abiotic? Were they a part of the songwriting process for Casuistry or did you already have most the material written?

John: Travis came highly recommended from a good friend and his audition was chosen out of about 4 or 5 other potential candidates at the time. His voice was definitely the direction we saw the band moving in and I personally could not be happier with his performance on the album. Brent was in a band from central Florida and we asked him to audition while we were going through our drummer transition. He’s one of the most motivated and hard-working dudes I’ve ever known. Most of the music was written before they joined, but Travis‘ lyrics and vocal patterns are all him. Brent was really able to bring some different ideas into the songs and helped us tweak to get them studio-ready.

Derek: Casuistry features cameos by Dying Fetus’ John Gallagher and BTBAM’s Paul Waggoner. How did those come about?

John: John Gallagher’s feature came after doing a full US run with them in back in 2013. John and I stayed in contact and I sent him some demos of the new stuff. He kills! Paul’s part actually came about through Jamie. I’ve always looked up to Paul as a guitar player and Jamie played a huge part in making that happen for us!

Derek: The new album is crushing and heavy, from start to finish. But there’s also a great deal of memorable melody in the songs. Was that a conscious effort or just something that happened as the songwriting progressed?

John: Definitely a conscious effort. We made it a point to make every song as catchy as we could without compromising the sound that makes us Abiotic. 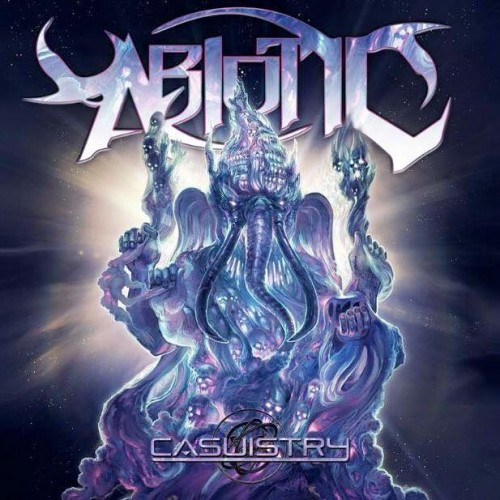 Derek: The artwork for Casuistry is gorgeous — who did it? Did you have an idea of what you wanted for the cover or did you just let the artist interpret the title?

John: Pär Olofsson lent his amazing talents on the cover art and Brian Ames at Metal Blade put together the album layout. We had a general idea with Ganesh at the center, and he really brought it to life!

Derek: You just wrapped up the first tour in support of the new album. How did the shows go? Do you have any summer tour plans? Any festival appearances?

John: The tour went great! We did 35 shows in 38 days and really enjoyed the response we got for the new tunes. No touring plans just yet, but we’re working on it!

John: First guitar I ever owned was a $79 “Discovery” guitar from a local music shop. It was red and looked metal! The first metal album I ever owned was The Odyssey by Symphony X. And the first metal concert I went to was a local show in Miami. Local bands with dudes from my high school. Definitely played a big part in pursuing music as a career.

John: Cinnamon Toast Crunch. I’d say my “Transcend the Illusion” shirt from The Faceless. Dog person, for sure. I’ve got 4 of em!

Derek: Thank you so much for taking the time to answer my questions, I’m looking forward to seeing Abiotic on tour!

Check out “Cast Into The Depths” from Casuistry! And stream the album on Spotify here.