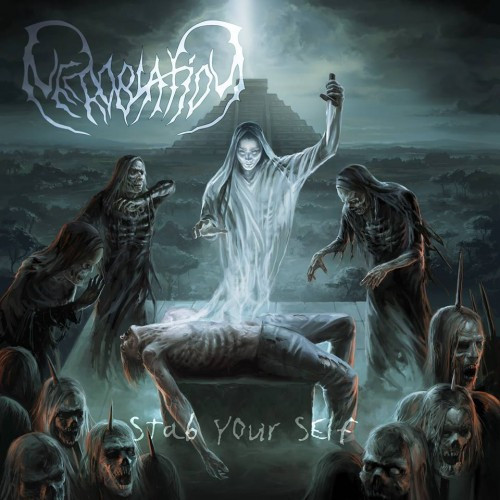 (Grant Skelton turns in this review of the new album by the Swiss band Necroblation.)

To ask about the exact nature and essence of “the self” would yield answers too numerous to count. Freudian psychology might label the id as the true self. A psychic apparatus driven by whim and avarice, whose only goal is the satiety of its desires.

Someone from the Nietzschean school of philosophy might call the self the “will to power.” In this case, the self is a drive to progress and elevate oneself to become Übermensch, to define reality and morality as one sees fit.

Darwinian evolution gave us the ideas of survival and self-preservation, concepts that involve better-adapted selves triumphing over less-adapted ones.

Christian orthodoxy, which influences Necroblation’s lyrical perspectives, has its own definition of the self. The title of the band’s new album, Stab Your Self, is an intentional double entendre. Notwithstanding, to dismiss this as a darkly humorous reference to suicide would be premature. 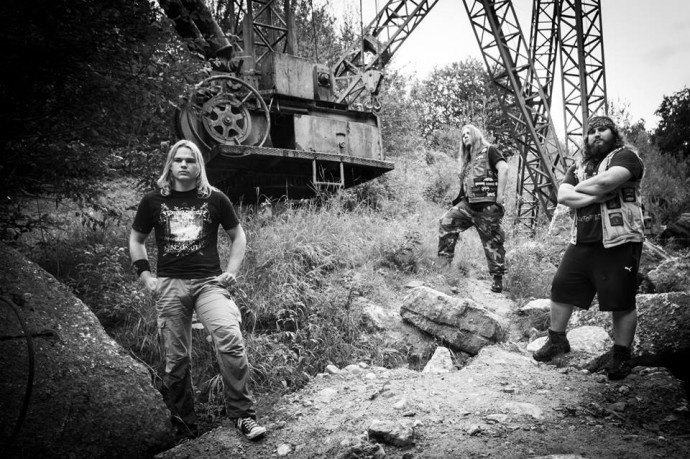 Necroblation was formed in 2010 in Lausanne, Switzerland. Their current lineup consists of Jonathan (Vocals/Guitar), Greg (Bass), and Yannick (Drums). In March of 2013, they released their first album, Ablation of Death. In 2014, the band began working diligently on their sophomore release. After a grueling year, fans finally received new material in the form of Stab Your Self. That album was released on June 12. We covered the premiere of “Gehenna” back in May (here). Since then, we have had the opportunity to hear the rest of the album. Put simply, if the sulphurous aroma of “Gehenna” tantalized you, the rest of the album will drench you with boiling pitch.

Stab Your Self opens with “Prelude in D Minor.” It is a variation of Johann Sebastian Bach’s “Prelude In C Minor (BWV 999).” The acoustic intro is performed by Didier Muller. Track 2 will definitely end up in one of my year-end lists. In the previous article, I mentioned that I wanted to hear “Cut My Foreskin” by virtue of its title. This song is a pike in one’s ear canal — a rusty, over-sized death metal drill-bit grinding your innards to gory giblets. Instantly, you can hear how the production has improved since the band’s debut. Each instrument has body and depth. The band’s energy is honed to a fine point; their sound is razor-sharp on this album.

“Materialistic Plague” and “Invocation” are progeny of “Cut My Foreskin.” These three songs throw the listener to the wolves without mercy. Jonathan’s solos seem more evident and apparent on this album. His high and low vocal range has also improved since Ablation of Death.

I couldn’t review this album without mentioning Yannick’s drumming. His method, especially on the album’s faster tracks, seems a breed apart from other modern death drummers. The band have cited Obituary as an influence, and I’ve made no efforts to hide my love for that band. I can hear inspiration from Donald Tardy in Yannick’s drumming.  Make no mistake, this album has plenty of blast beats for you to gorge on. But, I appreciate not hearing double-bass kicks every second of every song.

Greg’s bass is more tenacious on this release. It is the death shroud of the rhythm section, and it wraps the listener up warmly. His bass lines are especially noteworthy on tracks like “Child Of Illusion” and “Self-Elevation and Chaos.” The former track appeared on Ablation of Death as an instrumental acoustic bonus track. Here, the song is fully grown. It has metamorphosed into a dismal, elegiac black metal psalm.

“Self-Elevation and Chaos,” on the other hand, is an instrumental jam that showcases some cacophonous shred and distortion from Jonathan. “The Standing Nature,” another instrumental, sees Necroblation venturing into sludgy post-metal waters. The album concludes with a re-recorded version of “Rotten To The Core,” from the band’s debut. This track has a mechanized grind to it that should serve as a taste of their older material for those new to the band.

To conclude, I want to wrap up what I mentioned about the nature of “the self” and how that relates to the title of Necroblation’s new album. “Cut My Foreskin” seems to derive its title, at least in part, from the New Testament epistle of Galatians. I realize that you likely didn’t read an album review for a Bible lesson, but stick with me.

In that epistle, the apostle Paul was writing to churches in Galatia, a city in modern-day Turkey. The essential theme of the letter regards a person’s moral standing before God, and the basis for that moral standing. Is a person justified and reconciled with God because of his own merits, works, and deeds? Or is a person justified by his faith alone? A sect in the Galatian region taught that it was mandatory for all believers in Christ to be circumcised.

In his diatribe against this teaching, Paul wrote in Galatians 5:12 (ESV), “I wish those who unsettle you would emasculate themselves!” The Greek word translated as “emasculate” is “apokoptō.” It means “to cut off, amputate, mutilate.”

So what’s the point? The self can find exaltation, power, and the praise and admiration of others within stained-glass walls. Religious systems are ideal places for “selves” seeking to advance causes, agendas, and all manner of propaganda. Religious hypocrisy and bigotry are by no means new themes in metal music. But anger about hypocrisy and bigotry is not limited to metal music. The apostle Paul wrote that religious hypocrites should castrate themselves. That’s unabashedly metal. And to me, that’s the point of Necroblation’s Stab Your Self.

Stream/purchase Stab Your Self on Bandcamp:

4 Responses to “NECROBLATION: “STAB YOUR SELF””