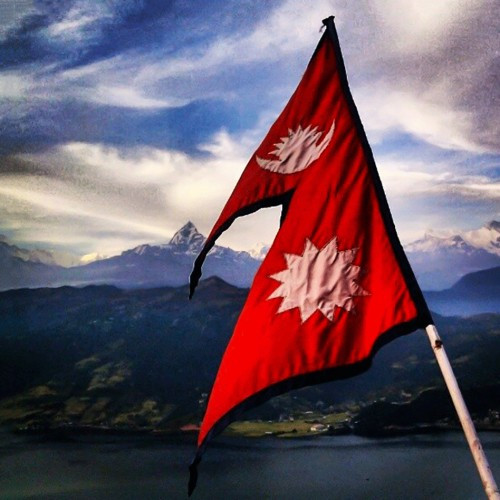 Those of us like me who live many thousands of miles away may not have personally known anyone affected by this almost unimaginable disaster. One of my few acquaintances in the region is Aabeg Gautam, the co-founder, vocalist, and bass-player of Dying Out Flame, whose 2014 debut album Shiva Rudrastakam I reviewed here (it’s wondrously good, and if you haven’t already discovered it, you should — at this location).

Fortunately, though hospitalized in Kathmandu, he survived the quakes, but lost friends and experienced damage to his home. Through him I learned about the compilation that’s the subject of this post.

Other efforts have been organized within the global community of metal to help raise funds for disaster relief, but this one is the project closest to “ground zero”. Entitled Nepal Earthquake Relief, it’s a digital comp consisting of 18 tracks by 17 Nepalese bands or bands from elsewhere with Nepalese members (the band BruteMukti has a concluding bonus track among the 18 as well as the third song on the album).

The track list includes one of the killer songs from Dying Out Flame’s Shiva Rudrastakam, and they and the excellent Albatross were the only bands I was familiar with before diving into this compilation. But apart from the worthy cause to which this comp is dedicated, it’s loaded with a lot of other great music, spanning a range of styles from hard rock to hardcore to a wide variety of extreme metal, and so it proves to be a good introduction to groups whose names may not be as visible to most of this site’s readers as others from less remote locations.

I’ve got my own favorites on the album, but really, everything here is worth checking out.

The compilation is available on Bandcamp for $1 or more — and obviously, the more the better. The Bandcamp page explains that proceeds from sales “go to the Jai Nepal Youth Group, a team that has been lending a helping hand to those affected by the quake”. Their web site is here

I’ve included the Bandcamp stream below, and this is where you go to get it:

I’ve included one other piece of Nepal-related metal news below the stream.

The other piece of recent news, which I also learned from Aabeg Gautam, is that the crushing Funerus — which features frontwoman Jill McEntee and Incantation’s John McEntee, will be playing a concert in Kathmandu on September 10, 2015, as well as a September 9 show in Pokhara. I had the pleasure of seeing the band for the first time at this year’s Maryland Deathfest, and it’s cool that they will be making the trip to Nepal, especially at this time, to show solidarity with our metal brothers and sisters in that ravaged land.

More dates on Funerus‘ “Black Death Over Asia” tour will be announced here: 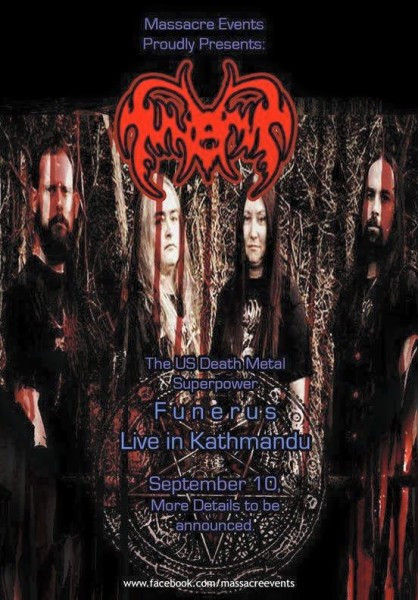