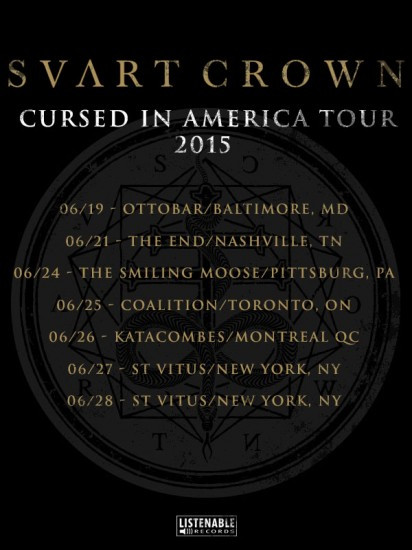 I doubt any band has been so brutally fucked by the disintegration of the Metal Alliance Tour as the French band Svart Crown — and for those who haven’t been following the dismal news, I’ll recap it in a minute. But Svart Crown just don’t fucking quit. They’re now forging ahead on their own, with the appropriately named Cursed In America tour, and they need some support.

I’m hoping this post will in some small way spread the word about the shows they’ve got left and that people will turn out for them, so they don’t return to France with a completely shitty taste in their mouths. But don’t get me wrong — this isn’t an appeal for charity. This is a really excellent band, and you’ll be glad you saw them if you get the chance.

To recap:  Svart Crown were booked to tour the U.S. as part of the Metal Alliance Tour headlined by Deicide, along with Entombed A.D., Hate Eternal, Black Crown Initiate, Lorna Shore. On June 8, just a few dates into the tour, Entombed A.D. were removed from the tour, apparently because the promoters didn’t think the tour was making enough money to financially support them. And then two days after that, the entire tour was “cancelled”. 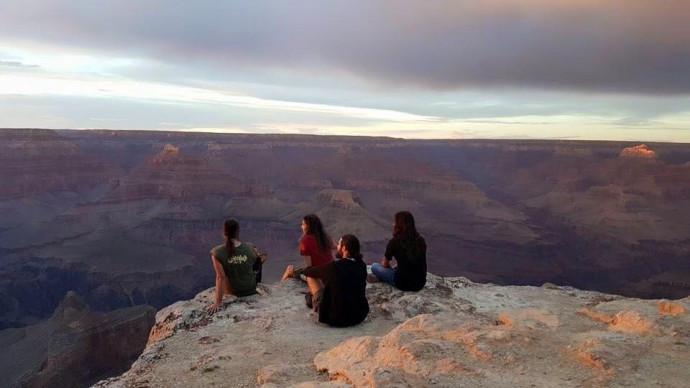 Deicide decided to rename the tour and continue on, but it appears that this required at least Svart Crown to re-book shows for themselves since the original promoters and whatever deals they had with venues had gone up in smoke. At that point, Svart Crown posted this announcement on Facebook:

“Unfortunately, our fellow and best tour bus companions Entombed A.D. had to fly back to Sweden, [and] we had then to decide either to do the same and return to France from Seattle, or to find a solution for ourselves (rent a van, driving, sleeping places, etc.) to keep going with the rest of the bands.”

Rather than go home, the band decided to continue on as part of the Deicide tour, but it was clear they were having to do this on their own:

“[We] thank you for any way you can support us–blast the gigs, check out our merch at our stand […] we will be eternally thankful for any help you can afford, [such as] helping us with tips and PayPal, or even with a place to stay so we keep up!”

And then, a week after that (June 17), what was left of the Deicide tour was also cancelled. As the band explained at that point:

“Erik Rutan from Hate Eternal got a severe hand injury after a load out in Lubbock. He’s now unable to play guitar now for the remaining dates. Without Entombed and Hate Eternal, promoters have chosen to cancel the remaining shows.”

But Svart Crown still didn’t give up. They’re soldiering on by themselves, hooking up the additional shows on the flyer at the top of this post. I don’t know for sure which other bands will be playing at all the shows, but here’s some of the info:

To keep track of further developments, HERE is a link to Svart Crown’s Facebook page.

I’m sure that privately, these dudes must have been pulling their hair out and uttering some fine French curses, but on their Facebook page I haven’t seen any bitching or blaming or invective at all, though who could blame them if they had?  They’ve been a class act, as far as I can see, and they deserve some support.

And if you want one more good reason to go see them if you’re in the vicinity of any of these venues, check this out: