(DGR reviews the new album by those French titans in Kronos.)

Since Unique Leader has come into prominence over the last few years, the label has been the overseer of a tech-death explosion, one that has seen them dredging up all kinds of different groups from the rubble and ash piles of local scenes while at the same time ensuring that in the wake of their roster of bands there would be absolutely no notes left for anyone else to play on guitar.

As something of a genre-label, Unique Leader have acquired a sound — the type of noise where you can see their logo on a group’s album and more often than not usually guess what they will sound like. Not to knock them, of course, as the label has been the savior of the Nor-Cal death metal scene up here, picking up some of the most highly technical and underrated bands and at least giving them a shot after they’ve been scrapping it out for years. 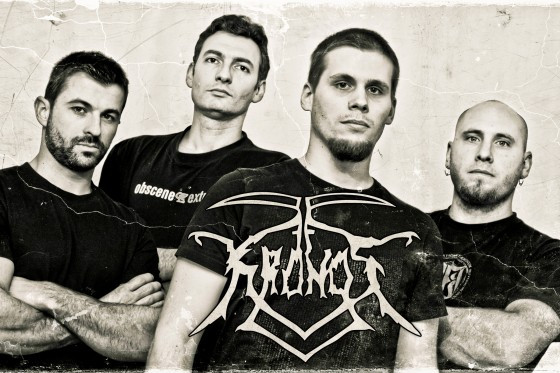 There has definitely been an evolution of a distinctive Unique Leader sound, just as there was for Sumerian for a few years, when they were the purveyors of a hard-to-define branch of metal-core that was eventually dubbed ‘Sumerian-core’. It comes with a sleek, heavy production, one that despite the volley of instruments being thrown at you is still super-clear and — without sounding accusatory — rather shiny.

Some bands these days are even starting to feel tailor-made for it. The label clearly has a certain taste and tends to pick up bands within that spectrum — I would not be shocked, for instance, to hear that Modesto’s Becoming Myth were about to be picked up, if not already having been vetted by the label, going by their logo and recent single Father Of The Sky.

The people at Unique Leader must be wizards, because the groups they choose to work with, more often than not, come out with a huge and professional sounding production job, but it’s also one that, combined with the genre of tech-death that they are promoting, means that bands have to work extra-hard now in order to break out of the Unique Leader sound in order to be truly “unique”.

I don’t mean to suggest that every band has taken this path, of course. French group Dysmorphic took a slimmer and more alien route on their recording, coming off sharp and rabid, and San Francisco’s Fallujah found that recording in a Cat 5 hurricane was the best way for them to record a disc, while fellow Californians WRVTH (whose album I’m also working on a review for) have an album that feels like a fusing of technical death metal, post-hardcore, and a smidge of ambient instrumentalism.

This, in a roundabout way, brings me to French brutal death-metallers Kronos — a long-running band but recent Unique Leader signee that bare all the hallmarks of a Unique Leader band: a super-sleek production, a relentless pace, a highly technical style of playing that leaves you stewing in jealousy, and more scales than a GNC Store.

Kronos have existed since 1994 — which means they are incredibly long-running — but the group’s upcoming release Arisen New Era feels like a re-launch of the band, a new-Kronos, as it is the group’s first album in eight years other than an appearance on a compilation. The group even have themselves something of a new lineup since 2007’s The Hellenic Terror, sporting a new vocalist and drummer.

However, we are beginning to reach a tipping point for a lot of bands of this kind — one that is seeing many of these groups who at first would’ve been absolutely mind-blowing starting to become a standard, as more and more of them get their chance in the spotlight. Kronos, however, manage to hold back the tide for a bit, or at least they won’t be the ones to blame — as Arisen New Era is an intense quick hit to the system that, yes, while clearly a Unique Leader release, is one that manages to work that formula once again yet wring new life out of it.

For a band who’ve named themselves after the time-management software that I use to punch in for work everyday, the group move at a blisteringly fast pace, a blink-and-you’ll-miss-it style of speed that makes the nine tracks (barely) contained on Arisen New Era absolutely fly by. Thirty-six-some-odd minutes doesn’t look short on paper, but goddamned does Arisen New Era frequently reach hyperspeed.

(Also, not serious on the band-name heritage part, but where the hell else on the internet are you going to go for hot hourly-wage-slave punch-clock jokes and see the author get away with it?)

It’s not shocking that Arisen New Era absolutely flies — because where Kronos excel is in the lightning-fast blast run, where the drummer and vocalist seem to be competing as to who can deliver sound the fastest, where the lyrics seem to match each snare hit meter-for-meter. Vocalist Trivette (of Diluvian and Redeeming Torment) and drummer Anthony Reyboz — the new men in the recording lineup — earn their keep in this manner, as if their addition was calculated as a personal competition to see who could make the band go quickest.

Anthony Reyboz spends a huge slab of this album blasting away, coming across like a marathon runner who has lost his mind in a hail of gunfire. If albums are often built on the foundation of what the drummer is doing, then Arisen New Era is buttressed by a wall of Gatling guns, all spinning until their barrels have shot past red and become white-hot.

For the purposes of a speed gauge, take a glance at the group’s opening song “Infernal Abyss Sovereignty” — which doesn’t even do the standard quick breath, situate, and then launch into a volley of music. It just starts. It’s a yell, and the band are off to the races for the next half hour, delivering what is going to be a wall of groove-heavy riffs, the occasional lead, and so many blast-run sections that the album could be described as riddled with them.

This approach, though, can be something of a double-edged sword. When you have so much focus on running at top speed, then your music can, and often will, blur. Label mates Alterbeast ran into the same issue on their disc Immortal and were able to somewhat deftly dance around it, but even then it had its moments of getting lost within a gigantic wall of sound. And I wasn’t joking about the album going by in the blink of an eye — although Kronos avoid falling into the trap of being a full mess of riffs by punctuating each song with a couple of key moments and motifs that manage to differentiate the songs from each other.

“Aeons Titan Crown” — the album’s sixth blastfest — is one of the few slightly mid-tempo grinders for a bit before it speeds up into a pummeling section that I haven’t heard hit so hard since “Barbaric Bludgeoning” from Volturyon’s Human Demolition EP last year. The song “Klymenos Underwrath” — which our lovely site helped premiere (here) — is another bruiser of a song, but also one that is punctuated by some serious word-salad roars that feature paragraphs of words packed into measures of music made for maybe two or three syllables.

Despite my misgivings about how agile the album may seem, it has still moved into the rotation of my go-to, quick-hit-to-the-system sort of discs. I have a few of these, ones that I know move at light speed, and honestly, they’re perfect for making me get up and move, whether it be dragging my ass through work or staring at a blank text file and e-mailing a certain website editor that “I swear to you, I am working on a review” message.

In part, I think it’s because the guys in Kronos are veteran enough to know exactly what the hell they’re doing, and they know how to make a listener lock in to an album. While the speed-groove brutal-death approach isn’t new, even among the ranks of their current label the guitar-playing pair of Ricardo Chuat (listed as Richard on Metal-Archives) and Jérôme Grammaire play a huge role in this success. They stack riff and part upon each other to built a giant mound of guitar playing and they are able to switch parts with the precision of surgeons. They’re a huge driving force within Kronos and they get to play inhumanly fast, while sprinkling headbanging segments throughout much of Arisen New Era.

The bass is also springy as hell on this disc. Every time a string gets picked on this album, you can practically hear every vibration, and it adds a ton of “bounce” to the album.

Kronos aren’t re-inventing the wheel on Arisen New Era, but what they have done is refine it to a knife-edge point, and the music contained within is lethal. It’s a headbanger’s album and one that moves confidently within the realm of brutal-death in the same way an expert martial artist does. While Arisen New Era does feel like something of a re-launch for the band — new members, new label, etc. — the guys have a clear eye on their target, and after three albums are shooting it right between the eyes.

Arisen New Era will be released via Unique Leader Records on July 24, 2015. The first single can be heard below, and the second one debuted yesterday at DECIBEL — so check that out HERE.