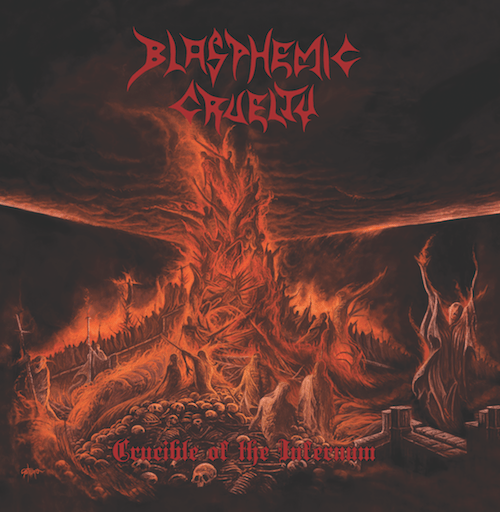 On July 20, Hells Headbangers will release Crucible of the Infernum, a new EP by Florida’s Blasphemic Cruelty. It’s the first new music from the band since their debut album Devil’s Mayhem, released by the Osmose label seven years ago — and we’ve got a taste of the carnage it delivers through our official premiere of the track “Icons of Revolt“.

Blasphemic Cruelty is led by former Angelcorpse hitman Gene Palubicki (Perdition Temple) on guitars, and he’s joined by vocalist/bassist Alex Blume (Ares Kingdom) and drummer Gina Ambrosio, who also had Angelcorpse ties. Together, this trio have concocted three original songs plus a cover of Sodom’s “The Crippler”. 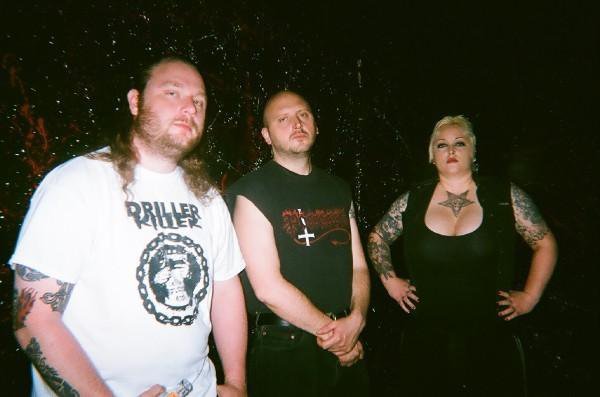 “Icons of Revolt” is a blistering rampage of vicious death/thrash, with dextrous riffs that swarm and change direction at high speed, girded by equally fleet-fingered bass notes and rapidly changing, machine-precise drum progressions that hit like a turbocharged nail gun. There’s a shrieking, searing guitar solo in the song that’s pure, classic, death metal malevolence in action, and Alex Brume’s abrasive vocals are as furious and flash-scarring as you could want for this kind of metal.

It’s the kind of merciless and marauding death metal that’s never going to go out of style as long as it’s written and performed this well. It combines in quintessential fashion the sensation of being caught in a tornado while at the same time being subjected to potent grooves that will get your head and your body moving to the rhythms.

The track list for the EP is as follows:

1. Imperium of the Lawless One
2. Icons of Revolt
3. From Crypts of Bloodlust
4. The Crippler (Sodom cover)

Crucible of the Infernum can be pre-ordered in digital form via the Bandcamp link below, and on CD at this location. The EP will also be released on vinyl. You can follow the band on Facebook here.

2 Responses to “AN NCS PREMIERE: BLASPHEMIC CRUELTY — “ICONS OF REVOLT””