(DGR reviews the new album by WRVTH [formerly known as Wrath of Vesuvius].)

It hasn’t been lost on me that over the years I’ve been lucky when it comes to seeing bands. While not in a preferred situation, my living in Sacramento has allowed me to see some really good shows, groups just starting out who have gone on to do some awesome things. By virtue of proximity to a couple of rather large cities and a populous region, I’ve been lucky enough to see some hyper-creative people roll through town multiple times.  Even though I have often joked that Sacramento is some backwater cow-town pretending to be a city (you’d be forgiven, judging by all the highway billboards and signs in our airport for thinking that the most exciting thing to do in Sacramento is go elsewhere), there have been perks — such as being able to see WRVTH over the years as they’ve came visiting from their hometown of San Jose, California, on tour.

At the time, the band was going by the name Wrath Of Vesuvius and they were dealing in the sort of hyper-technical metalcore-and-deathcore hybrid that was gaining steam in the mid-to-late 2000’s. It had its moments for sure, as many talented musicians continually added different elements into a -core sound.  In the case of Wrath Of Vesuivius the band neared a tech-death sphere multiple times. If you were to view a particular chunk of California in those days through a sort of prism, focused in on three corners — one being the Bay Area, one being Sacramento, and one being San Jose — you would’ve found quite the scene for that sort of hybrid, and eventually quite a few of those bands went full-blown technical death metal. 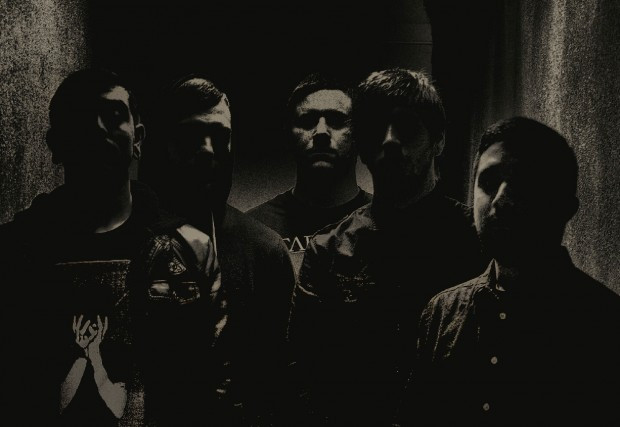 WRVTH were one of those groups. Operating under their former name, they played multiple shows through the Bay Area and inner valley and put out two albums in 2010 and 2013 (Portals Through Ophiuchus and Revelation, respectively). Since then, they’ve picked a new moniker that allowed them to keep the V from Vesuvius yet still call themselves ‘wrath’ (though the temptation to call them “Wruth” constantly presents itself) — and this newly christened group turns out to be an entirely different beast than the one on those two discs.

Along with the name-change has come a pretty distinct shift in sound, veering the band away from their tech-death and deathcore beginnings and into territory that bares all the hallmarks of the hardcore punk scene ramming headlong into their original sound, with other embellishments as well; not only are WRVTH very different from the usual fare in which the group’s label (Unique Leader) typically deals, but they also now sound very different from everything the band have done before.

WRVTH is an album that contains music from multiple different genres, all squaring off in an attempt to try and fuse together into a cohesive whole. As bands are often wont to do these days, instead of zeroing in on two or three specific points and trying to excel at them, WRVTH pick and choose from just about every subgenre of metal at their fingertips at one point or another across their new disc. While some get the lion’s share of time, you’ll find that the group’s general formula is a giant stew of different sounds, all tossed into a pot and ready to be served. The ghoulash of genres is a somewhat dangerous approach, as it loans itself to what feels like “wandering”, where bands tend to flit from part to part, jumping around with the attention span of a moth in a room full of lightbulbs. But WRVTH avoid those perils.

WRVTH’s self-titled release opens with the song “Harrowing Winds”, a track that we were given the opportunity to premiere some time back. Though the album has been out for a bit now, this may explain why some of it may seem familiar to you — and it is a song that accomplishes multiple things: It makes a statement that WRVTH are going to be a very different group than what you might be expecting, both compared to their earlier works and compared to the swath of hyper-talented, hyper-technical, hyper-fast bands that make up the Unique Leader crew. It opens with a couple of quiet strings and is otherwise a mostly ambient couple of seconds. From there the song descends into a chugging guitar part that still contains strains of the time when WRVTH were a very percussive tech-deathcore band — but once the vocal delivery sets in, you’ll see where the punk comparisons start coming in, hard and fast.

It’s actually interesting — if you’ll indulge me a minor divergence — how quickly the hybrid of hardcore and punk has loaned itself to the heavy metal world. There’s always been an undercurrent of it, but right now, I feel like there are more more bands with the term -hardcore stitched onto the back, usually of the blackened variety, than there have been before. WRVTH certainly include a few elements of that style in their sound, mostly using the desperate vocal delivery to wail around what feels like hundreds of guitar parts across all of this self-titled album.

Most of WRVTH actually feels like “Harrowing Winds”, a huge collection of parts that the band have somehow managed to bolt together and then scream over the top of it. There is a lot of gnashing and wailing, but WRVTH do manage to cover quite a bit of ground, while recognizing that their listeners do occasionally need a breather. While there is a ton of guitar work on the disc, the band show no fear about dropping into a softer section just to provide that breathing room and to give the music an opportunity to stretch.

WRVTH’s songs actually run a little on the long side, giving the impression that the band have something of a prog element to their sound. Given the number of genres that the band are trying to crash into one another, at the very least you could make an argument that they show no fear about exploring their sounds. Quite a few times, the band will move from huge, chugging riffs to ambient sections to death metal sections at the drop of a hat, and they manage to make them all fit together. So in a roundabout way, it’s not too shocking to see that some of the tracks stretch into the seven-minute range easily, though it rarely feels like they are running too long. The shorter tracks are two instrumentals that help give the disc a calmer flow than just the panicked hurricane that slowly becomes WRVTH’s modus operandi over the course of the album.

Where WRVTH do tend to suffer a little is in the breaking-out of individual songs on their album. WRVTH is a full-run disc — running it from front-to-back is an enjoyable activity — but if you’re asked afterwards which songs were your favorite, it can be a little difficult breaking them all out. Because the band do so much across the album, they actually wind up creating multiple permutations of certain motifs in different songs, as if they were doubling back on themselves a bit. However, this is one of those situations where each song is enjoyable on its own; were they to pop up on the shuffle program of your mp3 player of choice, you probably wouldn’t bother skipping it.

Part of this is that most of WRVTH’s melodies come from the band’s more ambient stretches; otherwise, the group are moving in a heavily percussive motion or throwing themselves into the wall, as musicians are wont to do. The group break out the occasional guitar lead, but they grow organically out of the songs most of the time — so the group may suffer a bit for not having that immediate hook. However, WRVTH are still impressive, because even though only two years have passed since the band’s last release, the music here feels like it has been crafted, chipped away at, and constantly reworked — built to stand in its strongest form. I don’t really want anything to change within it, and I certainly wouldn’t know where to begin in any event, as each track has the feel of a journey, and reaching the end is an accomplishment.

Some songs do get the joy of sticking out a bit more, though. “Harrowing Winds” has a chugging section (which leads into one of the group’s few breakdowns) that is still stuck in my head. It wormed its way into my brain long before I started writing this review and has currently taken up residence there; I’ve already started receiving mail from it and the amount of bill collectors already hitting it up is rather terrifying. “Lured By Knaves” is a long stretch of utter goddamned fury for a good chunk of it — giving both vocalist Trevor and drummer Joseph the opportunity to just bang away at their music for a while. “Cease To Exist” — while not a cover of the recent Suicide Silence song — is another one, camped out at the end of the album. It gives the group’s adventurous side the spotlight and free reign to go exploring, building an epic last song whose run time is challenged only by the mid-album journey “Forlorn” and the violent schizophrenia of the “Malaise”.

With WRVTH, the group have initiated a soft-relaunch with both a name change and the chance to present themselves as something of a different band, despite having a pretty sizable collection of work behind them. This change works for them on their self-titled release — the switch to a more progressive-minded sound does these guys a huge favor, and the whole band show themselves to be some expert musicians. Its not the heaviest album, and honestly, the stronger hardcore punk influence may cause some folks to shy away from it, but this is one group who are succeeding in joining a bunch of a genres together into their own musicial chimaera.

WRVTH’s long stretchs of ambience, combined with a half-billion different guitar riffs and occasional blast-beats, give the band the sense of an auteur, painting a multitude of different, distinctive pictures within their new disc’s run-time. Their current  combo of punk, death, and hardcore, and their tendency to explore a million different genres outside of those three, has given us a dynamic sleeper of a disc. You can relax to this album and then just as quickly want to groove and headbang. It’s an ambitious disc whose sensibilities strive for independence, reflecting the band’s desire to separate themselves from everyone around them, and it has a massive amount of appeal for that. It may not the most immediately accessible thing, packing in as much music as it does, but it is certainly an ambitious album that will transport you to a variety of places by the time it hits its closing notes.

WRVTH is out now on the Unique Leader label and it’s available for order here; it’s also available digitally at Amazon and iTunes. The entire album can be heard at Metal Sucks, and you can check out two of the tracks below.