Ten months have passed since the otherworldly entity known as Ævangelist released their third album, Writhes In the Murk, but they have not been resting quietly in the aftermath of that visionary emanation. Some of their activities since then have been made public, others have been the subject of hints and rumors, and still others we are pleased to announce today for the first time — including the release of a nightmarish new work entitled Dream An Evil Dream. Read on, as we collect what we have learned — and prepare yourselves for a stream of these new sounds from the Abysscape, following this news:

As for what has been made public, Ævangelist is preparing for live incursions at two eye-popping U.S. metal festivals later this year. We’ve mentioned these festivals before, and this gives us a reason to remind you about them. The first is Hells Headbash-Part 2, a festival organized by the Hells Headbangers label to celebrate their 15th anniversary. The event will take place in Cleveland on Labor Day weekend, September 4-6, 2015. For fans of extreme metal, the line-up is a stunner. Here’s the flyer: 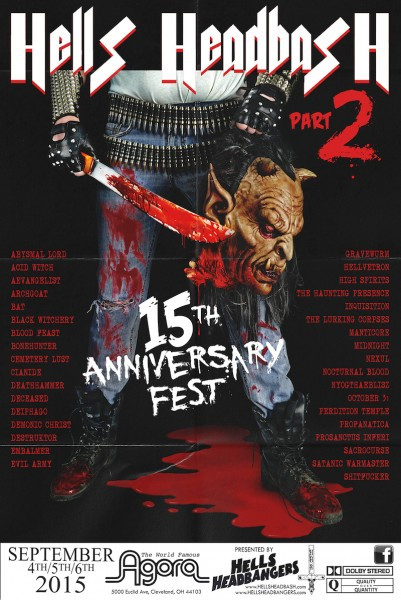 If you have any trouble reading the names (which includes Ævangelist, who will be appearing on Sunday, September 6), the complete line-up is listed at this location, where tickets are also available; there’s also an event page on Facebook here.

Ævangelist’s second U.S. festival appearance will be at the first edition of California Deathfest, which will take place in Oakland, California, on October 9-11. Although this is the inaugural installment of the festival, it’s being put on by the people who produce Maryland Deathfest and they’e launching this new venture with an amazing line-up that includes Autopsy, Immolation, and Infest as headliners. Ævangelist is scheduled to perform there on Saturday, October 10. The flyer for this event is below:

(Tickets for California Deathfest are available here, and more information is on Facebook here.) 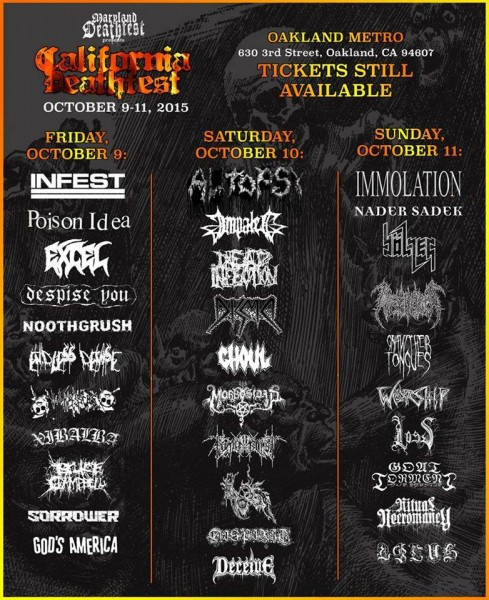 The second piece of news is intensely interesting, though details are scant: At the end of the first week of this month, without fanfare, both Blut Aus Nord and Ævangelist left comments on their Facebook pages indicating that Debemur Morti will be releasing a split album by both bands later this year under the title Codex Obscura Nomina, and we have confirmed that this will indeed happen, though further details, including the release date, won’t be disclosed until later.

Third, Ævangelist have recorded a demo version of a new piece named Dream an Evil Dream. In its current form, this EP-length work is entirely instrumental, with the band’s principal composer and instrumentalist Matron Thorn performing guitars, bass, live drums, and synthetics. We understand that Dream an Evil Dream was almost entirely improvised from a stream of consciousness. We have also learned that in final form the music will include the vocals of the band’s Ascaris, and there are hints that it will be given a special vinyl treatment at some point in the future.

Those who have closely followed the creations of Ævangelist know that although there are certain constants in the objectives and inspirations of their music, the manner of their expression is ever-changing. Dream an Evil Dream parts the veil into realms of terror and despair in ways that will be both familiar and different.

Huge groaning bass chords and the thunder of percussion unfold against a backdrop of harrowing noise, and unearthly filaments of lead guitar melody writhe through the massive low-end rhythms and the fog of distortion like a visitation of specters, or the hallucinations of a mind on the brink of madness. The music’s massive low-end boom and rumble compels physical movement as you hear it, while the shrill, layered guitar excretions and gales of black ambient sound become as hypnotic as they are disorienting.

The atmosphere of the music seems to be rooted in a very physical and sensual human experience, and yet one that, in its frenzy, has driven the participants into the maw of disintegration and destruction. There are moments of relative calm in this tornado of mortification and distress, but they hold horrors of their own.

Though it’s frightening to imagine the further depths that Dream an Evil Dream will reach after Ascaris adds his talents to the work, even in its demo form it has already become one of my favorite works by this unusual band, and it is worth fully immersing yourself in it from beginning to bitter end.

And by the way, lest you think that Dream an Evil Dream represents the sum total of new music we will have from Ævangelist this year, think again. Writhes In the Murk will have a successor. The next full step in the band’s progression is coming….

Experience this new evil dream from Ævangelist below. For those who wish to to follow the further activities of the band, visit these links:

7 Responses to “ÆVANGELIST: NEWS AND NEW MUSIC FROM THE VOID (“DREAM AN EVIL DREAM”)”