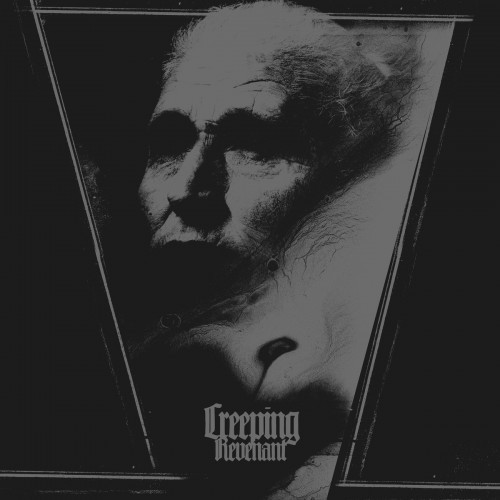 Steel yourself for a harrowing experience, for we’re about to bring you a full stream of Revenant, the new third album by New Zealand’s Creeping.

This isn’t an idle warning. Making your way through the album is like a brutal descent into a sodden catacombs inhabited by damned and vengeful spirits. The deeper you stagger and stumble into its depths, the farther the light recedes above you, replaced by an ever-increasing sense of implacable menace and wrenching loss. You are about to join the company of phantasms, and Creeping make their terrors your own.

Mostly slow or mid-paced, the songs are often as crushing and remorseless as the most catastrophic doom album you’re likely to find this year. Anchored by titanic, distorted riffs and earthquake drumming, the music is laced with eerie reverberating guitar melodies which enhance the supernatural atmosphere that surrounds the entire album.

As if that weren’t unsettling enough, Creeping periodically explode the music with thunderous double-bass assaults and squalls of savage riffing, torrential in their fury though no less dismal in the weight of their emotional impact. These grim cyclones of black metal savagery are electrifying; a “revenant” is a visible ghost or animated corpse that has returned from the grave to terrorize the living, and in these passages you come to fully understand why the word became the album’s title.

But Revenant’s combination of staggering dirges and ravening ferocity are still only part of what makes the album such a transfixing experience.

Two of Creeping’s three members (bassist/vocalist M. Pavlovic and guitarist S. Blomfield) are also members of House of Capricorn, a band whose latest album Morning Star Rise is loaded with memorable melodies — and their talent for creating melodic hooks is still evident in Creeping’s new album (though the magnetic clean vocals in House of Capricorn’s music are nowhere to be found in Revenant — instead you get a wrenching array of growls and howls).

As desolate and disorienting as this music is, it is nonetheless memorable; there are groaning riffs and haunting lead guitar arpeggios spread throughout the songs that will pull you back into this abyss of mourning. Even the album’s longest song, “Scythes Over My Grave”, has earned a place on our list of candidates for this year’s “most infectious extreme metal songs”.

“Crushing” is an overused word in metal, but Revenant more than earns the accolade, both in the immense power of its sound and in the devastating emotional effect of the music. It hits like an anvil, and keeps on hitting, until the message becomes immediate and undeniable: The cold embrace of the grave surrounds us all, even now.

Revenant was engineered by JSM of Ulcerate. The album will be released in a digisleeve CD edition by Daemon Worship on August 10, 2015. The album is available for pre-order via the Bandcamp link below; the pre-order allows an immediate download of two tracks — “Scythes” and “Drear”. A vinyl edition will be released by Iron Bonehead.