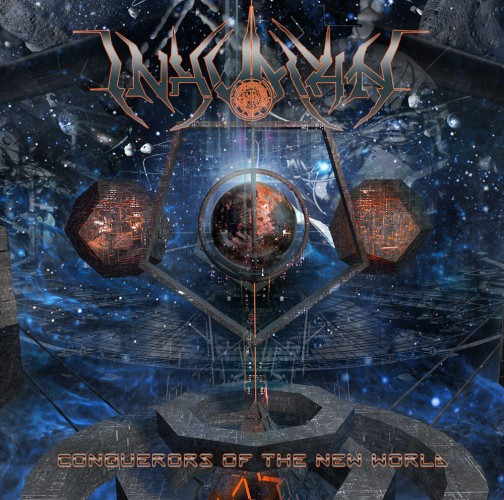 On August 30, Satanath Records and Sevared Records will jointly release the second album by Costa Rica’s Inhuman. The album’s name is Conquerors of the New World, and today you’ll find out how it begins, as we premiere the title track.

Different bands have different philosophies about how to begin an album. Some prefer to set the stage with an instrumental track, something designed to set the mood or begin building an atmosphere (though as often as not that kind of introduction has little to do with the music that follows it). Not this band. They jam the accelerator to the floor without giving you any time to catch your breath — and you’ll have difficulty finding a moment to breathe before it ends, too. 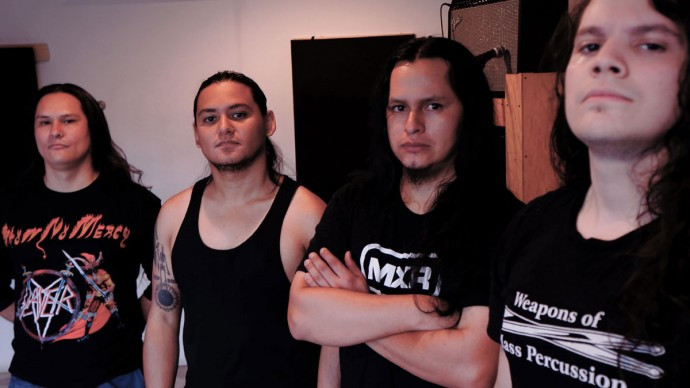 The head-whipping riffs and writhing bass notes that launch the song are a pure adrenaline rush, driven hard by an equally furious and frenzied drum performance that erupts in rapid-fire snare drum bursts and double-bass blasts (weapons of mass percussion, indeed). It’s a vicious sonic assault, made even more ravaging by the harsh death growls that eventually join the fray. But just when you think you’ve been dealt as traumatic a beating as you can imagine, the music surges even deeper into the red zone with an absolutely incinerating guitar solo.

Getting hosed down with a jet-spray of napalm is a very nice experience all by itself, but Inhuman aren’t content merely to torch you to a cinder. They’ve also cunningly worked an insidious melody into their barrage of notes and beats, and it then hangs around your thoroughly carbonized head like a virus.

Inhuman don’t mess around with diversions at the beginning of this album; they go right for the throat. And if you’re a fan of bestial death metal delivered with a lot of technical fireworks, “Conquerors of the New World” should hit you right in the jugular.

Take a nice deep breath and press “play” below. You can check out one more song from the album at the Sathanas Bandcamp page or at Inhuman’s Bandcamp, where their last album is also available.

2 Responses to “AN NCS PREMIERE: INHUMAN — “CONQUERORS OF THE NEW WORLD””