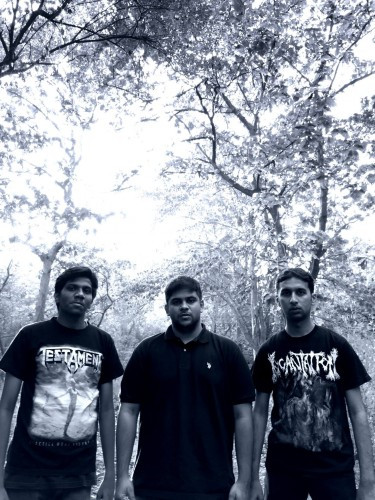 Hey Aleksey! Yes word has been going around about the Beyond Forgotten Shores Dormant Inferno/Dionysus split. Both bands have been premiered on NCS. The idea came about once during an online conversation between myself and Sheraz of Dionysus. We got introduced to Dionysus through our music, as during the time we formed there was no other Indian band playing similar dark doom as us, so we connected well with Dionysus. Both bands have a lot in common, so I’d say it was very natural for us to split an album with Dionysus.

This split was released by Transcending Obscurity India. I know that this label does their best to support the Indian local scene. How do you come to this collaboration?

Kunal Choksi has been a good friend of ours since a long time; we share a lot of commonalities in terms of music likings and preferences. Actually TOI is like a “go to” label for the extreme metal bands in India and has a good following for its distribution activities as well. We re-formed with a live line-up in 2013 to play a few gigs and ended the period of dormancy. That’s when TOI contacted us for signing up for future releases. Beyond Forgotten Shores was in the plans at that time and here we are!

Yes, the band was inactive for a long period. What did you do all that time?

Yes, we were inactive for almost 3 years… thing is, we were all college students when we formed the band. Soon after the release of In Sanity, Gautam left for the USA, I got busy with work, and Aurko and Bhaskar were committed to their academics. So it was like a break that was inevitable. But in that passage of no “band” activity, I wrote several songs for Dormant Inferno, some were complete while some were not. We knew we had to wait, wait for the right time to return, and not once in this period did we think that the band was done. In 2013 we played a few gigs and re-formed with members from Stark Denial and Varcas. Much thanks to their efforts and interest, the band gained momentum again.

You’re from Mumbai, and this city is known as one of biggest hives in the world. How is it to live there?

Yes, it’s a crazy city. Let me say a population of five cities packed into one. How does that sound? Lifestyle-wise, it’s perhaps the most fast-paced and competitive city in India. But I guess we are well used to it perhaps, the honesty of the people here is what makes Mumbai beautiful. It’s a safe city mostly, with plenty of things to do. However, it is not hard to find negativity and depression in this high-pressure, super-fast place, kind of an ideal scenario for us to write some doom.

I think that such books about big Indian cities like White Tiger or Shantaram are popular now in the Western world, at least both books are well-known in Russia. And their authors mostly depict an ugly side of Delhi, Mumbai, or Bangalore. Can we believe them?

I haven’t read those books to be honest. I don’t know what they are about. But in a general sense, you could believe them since there IS definitely an underside to all those cities. The divide between the rich and poor is massive. Even in a city like Mumbai, a major part of the population belongs to the slums. So all the negative ugly factors are definitely present.

I know also two doom bands from Bangalore — Bevar Sea and Djinn and Miskatonic. They — like Dormant Inferno — play western-oriented music. India has a rich cultural and historical legacy — why haven’t you turned to it and written some songs about it?

Well yes, Dormant Inferno and those bands as well play Westernized music. Part of the reason is that we like metal (or Western) music, and another way of looking at it is perhaps that the doom scene is still in its nascent stage here. I think it would be fair to say that for Dormant Inferno, Djinn & Miskatonic, and Bevar Sea it was more about developing a sound and cementing a space and acceptability for doom metal in the Indian scene (which is majorly dominated by mindless groove metal and core bands). I think we’ve all unconsciously stuck to the basics of doom ’til now, and maybe bands will start experimenting in the future! And for us, Dormant Inferno, we thrive on trying new things, so you never know — we could just use some ethnic influences in our future music!

What are your songs about?

Topics range from general negativity, depression, death, love, etc. Things based more on a personal level that everyone could relate to. We choose to take a look inside of us and do some soul-searching rather than write blatant lyrics about outside factors. Neither are we much into the imaginary fictional stuff.

How it was when you started a death/doom band, as no one around you was playing this style? Well, except Dying Embrace — for a long time, it was the only death/doom band in India.

Well, we formed in late 2009. Gautam Shankar and I were the founding members and we were jamming heavily in the initial days. The scene was very cluttered back then, with too many thrash, death, and core bands. Doom metal fans were few and far between, let alone doom bands! Albeit we took it as an opportunity to introduce something new in the scene, and I must say the response the metalheads gave us was very welcoming. We put our first EP In Sanity up for free download, as we wanted to reach the audiences far and wide, and things seem to work quite fine within the doom niche for us! DE was inactive back then and no one else played the kind of music we wanted to listen to, so we just decided to play it ourselves.

How often do you play live gigs? And do you have some festivals in your area?

Actually, we have only played four gigs to date. Gautam is in the USA now. As I said, we played a few gigs with a fresh line up in 2013/14, but couldn’t last long. So now we’re just focusing on the music and future releases. Yes, there are many annual fests that happen here, like BOA, TSF, Domination the Deathfest, and also gigs organized by Transcending Obscurity.

How did the work over these new songs go? Where did you record this stuff?

The work on these tracks was as usual — I write a few riffs, send it across to Gautam and Lening, and we go from there. It’s mostly very time-consuming, as we don’t force ourselves to “finish the song”. We let it develop with its own natural time, as we play music for pleasure and not as a job where you put deadlines to every task at hand. So “Veil of Lunacy” is the latest track we composed over the months of February ’til July 2014, and “Deliverance” is a track that was left unfinished since our In Sanity EP days. We were jamming on it in 2010 but it just didn’t feel ready to go on the first EP, so we left it as it was. And when this split was planned, we decided to rework on the track and the result is here!

And the third track is a cover of “A Once Holy Throne” by Incantation, as it has been one of our favorite bands over the years and it was our dream to try our hand at an Incantation song. We chose it because it’s got a really doomy, eerie vibe to it and that’s what we like. The recording/mixing/mastering has been done Ashwin Shriyan at Mindmap Productions.

Do you already feel yourself ready to write new songs for a full-length album? What are your plans?

Yes, we have started working on things in a sketchy manner, it’s only the initial phase. And to be honest we are not in a hurry as we want to make sure we put our best effort for the full-length and let things happen naturally. In mid-2015 we are participating in Pentacle of Doom, which is a 5-way split of all-Indian doom bands, so we are quite excited about that! We have already recorded a new track for it, while we are promoting Beyond Forgotten Shores simultaneously, so I think we have our hands full for 2015.

How did you and Dionysus choose the art-work for the CD, considering the fact that Beyond Forgotten Shores is split-album?

Actually the artwork and inlay was designed and painted by Kunal Choksi. We gave him full freedom, as he was quite keen to do the art for this CD. And we were pleasantly surprised by how mysterious and beautiful it came out.

What was your favorite book when you went to school?

That’s a difficult question haha…I am not a voracious reader, but Blood Crazy by Simon Clark was a good one. I have revisited it a few times.

Dionysus are from Pakistan, and it’s known that India has a long confrontation with Pakistan. Has this situation changed through time?

We aren’t sure about the situation changing because of several reasons, obviously. But for us as metalheads it makes no difference. Talking to the guys from Dionysius is just like having a chat with our regular local buddies, so hopefully plenty more Ind/Pak bands will collaborate in future.

Dormant Inferno also appeared on the compilation Motörhead Tribute India. What is the story behind this tribute?

Oh yes, that happened in 2013. It was a really good initiative where bands from all parts of the country contributed. It was a tribute to commemorate how important Motörhead is to all of us listening to Metal. All bands gave their own little twist to the tracks they chose. We covered “The Game”, and it was received well by listeners. More things like this should happen.

One Response to “AN NCS INTERVIEW: DORMANT INFERNO”