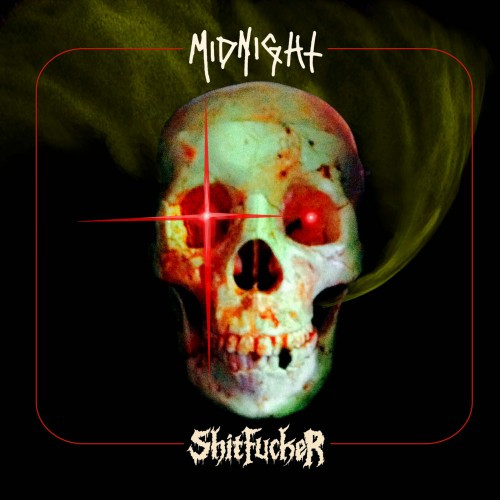 This is one of those extremely rare occasions when I’m writing about a new release without being able to include a stream of any of the music. This leaves you without the vital safety net of your own ears, wholly dependent on my own gibberish as a guide. While I really hate putting you in that position, I really have to froth about this release now. If and when a music stream surfaces, I’ll try to remember to add it. But since my memory is no more reliable than my verbiage, maybe you should just order this tasty little split for yourselves.

The partners in crime on this two-song release are Cleveland’s Midnight and Detroit’s Shitfucker, and it will be discharged by Hells Headbangers on 7″ vinyl on September 4.

Midnight’s track is “Sadist Sodomystic Seducer”, and it’s their first new music since 2014’s stupendous No Mercy For Mayhem. It’s only 2:13 long, but man it’s good. 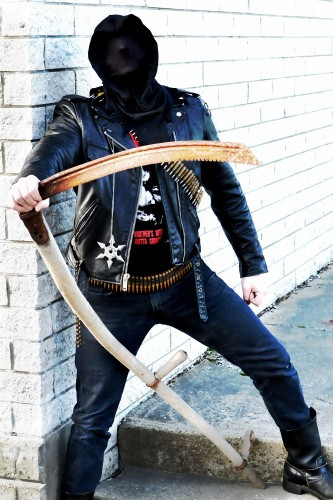 It’s a fast-paced, hard-rocking romp. The riffs are magnetic and malignant, riding the back of a simple but blood-pumping punk beat, with one quick switch in rhythm and riffing to keep things (more) interesting. But what really drives this electric jolt of speed metal into infernal territory are Athenar’s vocals. From his first bestial grunt straight through to his last, agonized howl, he lays into the mic with a snarling fury.

If you’re already a fan of Midnight, you’ll eat this up. If you haven’t yet discovered the band, follow these next links and do some exploring — this track is cut from the same cloth, the one soaked in bodily fluids and booze, and it ranks up there with the band’s best songs. 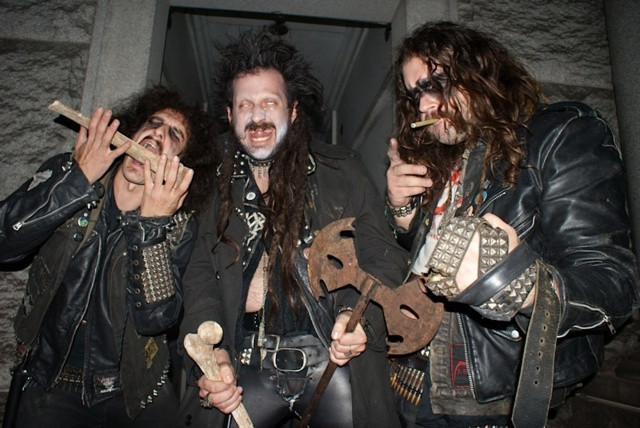 You know, when the name of the band is Shitfucker, it’s a pretty good clue that fame and fortune are not part of their mission statement. Actually, “mission statement” doesn’t seem like a phrase that would enter the heads of these dudes either. They’re too damned busy pumping out sulfurous sleaze to plan much beyond tomorrow’s apocalyptic hangover.

Shitfucker’s track is “Nightmare (pt. 2)”, and it follows the band’s 2014 split with G.I.S.M. and their 2013 debut album Suck Cocks In Hell. I’m not positive, but I’m pretty sure there’s no “Nightmare (pt. 1)” in the Shitfuckers catalogue, and although we can be left to guess about the “pt. 2” suffix, it’s actually a pretty tame song name for a band partial to titles like “Sex Dungeon” and “(Tear Their) Syphillitic Vaginas to Pieces” (a G.I.S.M. cover). But the song isn’t tame, no it is not.

Compared to Midnight’s track, it’s murkier and more lo-fi in the production, with the hum of fuzz surrounding everything but the filthy, feral shrieks of vocalist Demonbitch, and the song’s putrid but galvanizing guitar solo — both of which pierce the fuzz like knives. There’s a rumbling, grinding bass presence that eats up the pavement beneath the punk-influenced, rapid-fire drum beat and a squalling, almost psychedelic lead guitar that rises up over the simple but infectious speed-metal riff that’s at the diseased, beating heart of the song.

It really is a good song, and a fine companion to Midnight’s track. Put the two together, and you’ve got a hell of a short release.

P.S. I’m told there will be a music stream during the week of release.

4 Responses to “MIDNIGHT AND SHITFUCKER — A SPLIT RELEASE”