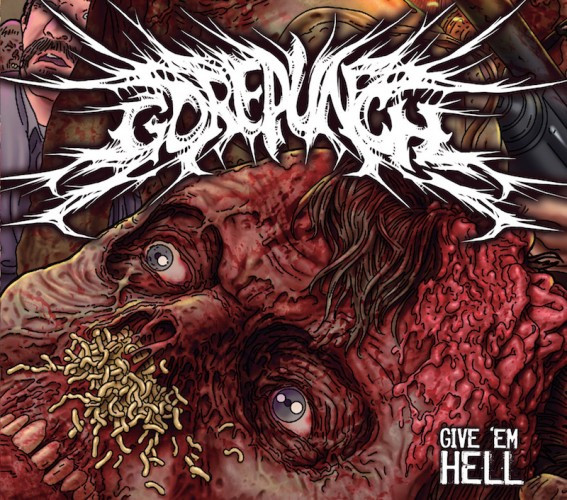 I bet that cover art got your attention. It was created by Enrique Lopez Lorenzana and it graces Give ‘Em Hell!, the debut album by a band named Gorepunch that will be released by Seeing Red Records on August 25.

The band may be new, but the members have paid their dues in such bands as Aborted, System Divide, Fear Factory, and Malignancy — and if the cover art didn’t get your attention, I bet that info did. So now, perhaps you’re ready to find out about the music — which you can explore in depth by listening to our premiere of the entire album.

But first, why don’t you check out the album’s back cover, just to make sure you’re properly prepared and in the right frame of mind: 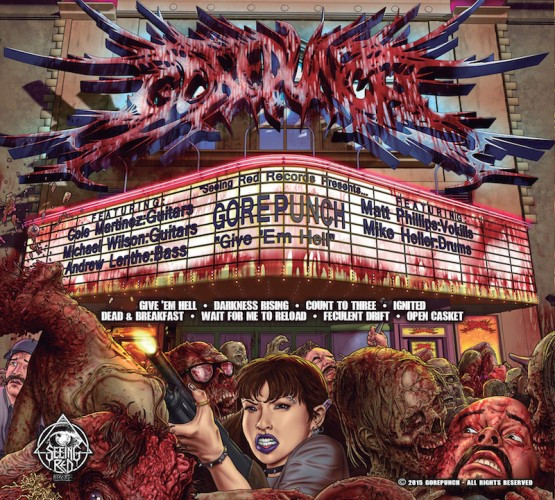 There’s a spooky intro at the album’s beginning, and then you start getting into the (rotting) meat of the matter with “Darkness Rising”. Accompanied by a flurry of throat-rupturing shrieks and maniacal roars, the band hurl a flurry of thrashing riffs, jolting rhythms, and attention-grabbing solos at you. And the fun doesn’t stop there.

There is indeed a healthy dose of morbid death metal brutality in the album along with a lot of full-throttle technical flair, but as even the first track will show you, this isn’t simply a thrashing death/grind blowtorch.

Along with the viciousness and the overarching atmosphere of ravenous fury, the band keep things interesting with infectious, head-battering grooves, lots of tempo dynamics (including some beefy breakdowns), and a scattering of dismal melodic touches that make the songs even more worth hearing again.

It’s the kind of sharply produced mayhem that should appeal to fans of butchers such as Exhumed and Gorerotted, as well as adherents of jet-fueled death/thrash. Hope you dig it as much as I have.

The members of Gorepunch are as follows:

The album was recorded and mixed by C. Martinez and mastered by Ken Sorceron (Abigail Williams). To repeat, it will be released on August 25 by Seeing Red Records (a division of Redefining Darkness LLC), and can be ordered via the Bandcamp link below.

2 Responses to “AN NCS PREMIERE: GOREPUNCH — “GIVE ‘EM HELL””