(Wil Cifer reviews the new album by My Dying Bride.)

Type-O Negative might have gotten bigger with their more Goth-infused brand of doom in the ’90s, but My Dying Bride brought the dismal darkness in a heavier and more mournful fashion. They started off with more death metal in the mix and evolved from there. This album is another step.

Aaron Stainthorpe’s voice is the only trademark of the band in the opener until it slows down at the two-and-half-minute mark. The violin feels a tad toned-down in the mix. Each song becomes a little more identifiable as the death metal vocals return on the second song. They are layered atop an up-beat metal gallop that slows into the dirges they are known for. 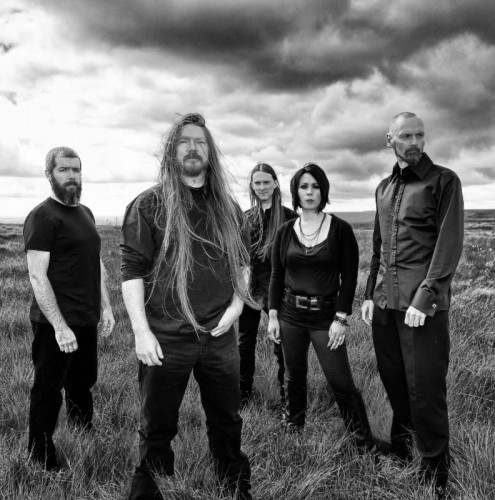 As in most metal press releases, the word “epic” is used to describe their sound. Here I think the epic quality lies in the regal dynamics this album oozes. They switch their guitar tones from a straightforward metal crunch into an almost post-rock shimmer with the clean guitar in the middle section of “To Shiver In Empty Halls”. The song builds into an almost thrashing section at the half-way point.

The syncopated riff in ” A Cold New Curse” is a prime example of what it sounds like to try new things yet still retain your signature sound. They eventually lock onto a powerful chug at the four-minute mark.

MDB are skilled at layering in other melodies. “Feel the Misery” has a very classic metal chug to it. You would almost expect a power metal singer over the music rather than the morose vocals this band is known for. Ultimately, this songs works in everything you could want from this band.

“A Thorn of Wisdom” starts off coming from more of the band’s Goth place rather the more crushing brands of metal they have encompassed over the years, but the growled vocals make another appearance on “I Celebrate Your Skin”.  At seven minutes they could teach newer doom bands the finer points of songwriting as they convey the dragging sense of a funereal march without dragging the song on forever.

In the more depressing, gothic-tinged doom of “Like Gods of the Sun”, the death metal vocals growl their way into the wrist-slitting melody. They are the masters at capturing that woeful sound and making their guitars really weep. The also truly know where to let the keyboards sit. The piano line plays a dominant role in the more ballad-like “I Almost Loved You”; it could almost be a VNV Nation song.

The violin finally cuts through the thick of things as the band close out the album with the lush shadowy sounds of “Within a Sleeping Forest”. The vocals come across as being a little higher than some of the yearning pleas Stainthorpe has crooned on earlier albums. It builds up, thanks to the double-bass rolling beneath it into a lumbering throb, and it slows back down into a dirge-like crawl around the eight-minute mark

Newer doom bands could learn a lot from My Dying Bride, as they did not make this album just two twenty-minute songs, but they also pack a lot more variance and dynamic flow into one song than many newer doom bands do in their entire discography.

Things change, and My Dying Bride are an example of a band who have gone about their growth with a lot of dignity and grace, with no threat of having their doom crowns stripped from them. If you are a fan of the band, you will have no trouble embracing this album and accepting it alongside their full-length classics as well as finding it a fitting main course to follow up the odds and ends of music they tossed us on Anti-Diluvian Chronicles.

Feel the Misery is set for release on September 18 by Peaceville Records. It can be pre-ordered on CD, vinyl, and in a special edition 2CD/2×10 vinyl set, at: www.peaceville.com/store

8 Responses to “MY DYING BRIDE: “FEEL THE MISERY””