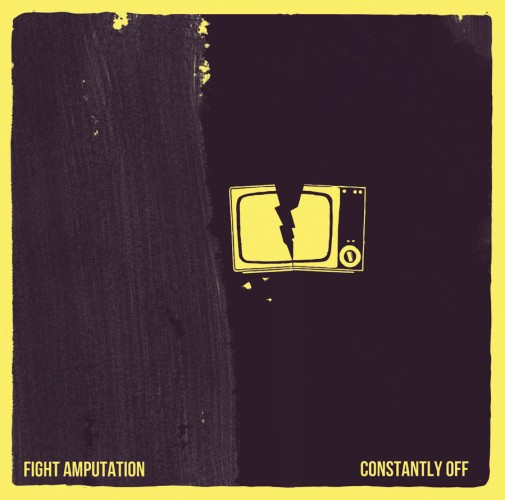 The new EP by Philadelphia’s Fight Amp(utation) is a whirlwind roller-coaster ride — or it would be if a roller-coaster were capable of leaping off the rails with a mind of its own in addition to veering up, down, and sideways. It’s only six songs with a total run-time of about 18 1/2 minutes, but Fight Amp pack a lot of head-spinning diversity into that span of time. It’s the kind of music that keeps you pinned in place, gleefully wondering what the hell is coming next.

Precisely for that reason, it’s also the kind of release that justifies a track-by-track commentary from the band — and that’s exactly what we have for you here. But you need to listen to the songs either before or while you’re reading — or ideally, do both. A stream of Constantly Off is at the bottom of this post, along with a Bandcamp link where you can pick it up if you like what it does to you. And to get an LP edition of the album, Brutal Panda has got that HERE. 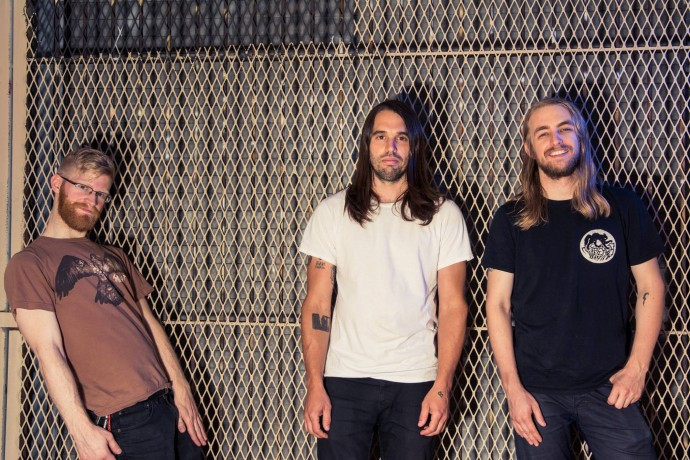 Mike McGinnis: The initial riffs and ideas for this song have a unique story… I indulged in some mind-bending psychedelic substance at the bar I work at in Philadelphia and wandered home alone when the walls started to move. I found myself in a condition where I was struggling to jam on my guitar when I got home, so I tuned the low string down to make the guitar double A flat because it was just easier to play. A strange night it was…and I turned on my recording program on my computer and jammed out the riffs to this song while tripping solo. I always wanted to get some drop double A songs worked into our repertoire so I’m stoked this one came naturally and that I had the foresight to click record before going too far into the void.

Jon DeHart: With the lyrics for this one, I wanted to mock the concept of victim shaming. I feel like I see more energy put towards solutions to being a victim rather than solutions for being the aggressor. The phrase “don’t be a victim” comes to mind. I wanted to say, “fuck you, I’ll be the victim”… I wanted to express that no one should be made to feel the lesser for being preyed upon.

MM: The first song we wrote for the new album, so this was sitting around and evolving for a while. We never considered it finished so the initial riffs I wrote with the first structure are like night and day compared to the album version. This was also the first batch of riffs I wrote after Birth Control came out, so I definitely was looking for a counterpoint to the mid paced sludge vibe of that album and these ripper / QOTSA on speed riffs  are what came out naturally.

JD: The lyrical themes for this are kind of a mix of different ideas. I tend to do that, a line here or there, stemming from a certain mood, mashed together haphazardly in the hopes that the sentiment stays abstract. Mainly I remember thinking about the urge to try on different personalities just to please others, and the guilt that comes with going against your instincts.

Leveling In A Dream

MM: Another riff that had been bouncing around in my head for a while before I knew what to do with it. This song was sort of the epitome of the “less is more” / hook-driven focus we took into this album. The structure I brought to Jon and Dan, which is a really simple song-oriented structure, pretty much stayed the same from start to finish and we put a lot of thought into vocals and how to really focus in on that hook. I had been using the main riff for this song as a segue between songs live well before this song was written too, so you can actually find videos of us playing and hear this riff as far back as 2013.

JD: I was having a bout of insomnia, which aside from lack of sleep, was giving me incredible dream recall. I noticed that every emotion in my dreams contained the same intensity; fear, happiness, confusion, sadness… they were all equally profound, as opposed to one emotion being valued over another like they are in the waking state. Every feeling was leveled equally, it felt like the closest I’ve come to the removal of the “self”, which is something I’ve been fascinated with for awhile. A lot of the lines for this song were written during the blurred area between being asleep/awake during that little stint as an insomniac.

Dan Smith: This song was pitched pretty much with the same structure that you hear in it now. Mike Mike-ified it and came up with a handful of riff variations, as well as came up with the kind-of-slow vocal melody in the chorus. I put words to it to put the verses together. The vocals were the biggest challenge and came together only at the last minute at the studio.

MM: This was another one similar to “Leveling”. I wrote the main riff and hook and really didn’t want to stray too far away from it and just focus on how to make one riff interesting throughout an entire song. I love the way this one turned out and feel like we placed it in a perfect spot on the album so there’s really this crushing heaviness that hits at the perfect moment in it’s second half.

JD: This one was a collaboration between Mike and I. Mike came in with the lyrics for the first half of the song, a critique on being tied to the digital world, and the false sense of escape it provides. I wrote the second half of the lyrics, from the quiet part on, with the intention of pointing the finger back at ourselves. We’re definitely not above participating in the constant information barrage that’s growing more and more intense here in the 21st century. The song title really doesn’t have much to do with the song at all. We were just joking about conspiracy theories in the practice space, I don’t even remember which one of us came up with it, but “I Perceive Reptoids” sounded so “stoner intellectual” that we couldn’t stop laughing. It was one of those working titles that stuck.

MM: This was the last song we wrote for the album and we very much had in mind some elements that the rest of the record had only touched on and not focused on enough in our opinions. The stop and go nature and not-so-song-oriented structure were sort of reactionary reflexes when coming up with this one after having written the rest of the album. This song also benefited from a group structuring after I brought in the initial ideas. Really that’s how the entire album is now that I think about it, and that’s the benefit of three musicians playing together that have found such a strong chemistry. Not one of these songs would be as interesting or have the groove they do without the input from all of us, and a lot of these super simple riffs I’m bringing to the table are brought to life by the ideas that Jon and Dan put forth during the writing process. Simple riffs with interwoven guitar and bass and interesting drums… Really that’s the type of music I prefer in general and I’m stoked to be part of a band that has output in that direction.

JD: This is another one where I can’t really pinpoint a theme. I really just wanted to write something very ugly and truthful about myself, a lot of self loathing and unidentifiable restlessness. The title is obviously sarcastic, I stole it from one of those medication or rehab commercials. The idea that you’re supposed to medicate yourself into being endlessly happy simply because it’s the character trait that has the highest value for others seems ridiculous to me. Embrace sadness. Embrace the ugly. Be human.

Dan Smith: The design was decided to be simple from the beginning. We wanted a conscious departure from the Birth Control artwork. Creating something appealing out of only one visual element was an exercise in restraint.

2 Responses to “FIGHT AMP: “CONSTANTLY OFF” — A FULL MUSIC STREAM AND A TRACK-BY-TRACK COMMENTARY”