Back in June we happily premiered a song named “Qubit Computed Multiverse” from Bosonic Quantvm Phenomena, the debut album by a multinational band named Raising the Veil (we also premiered a stream of the album), and today we’re equally happy to help bring you the debut of the band’s official lyric video for that same song.

For those who are new to the band, despite our best efforts to spread the word about them, the line-up includes Austrian vocalist George Wilfinger (Monument of Misanthropy, Disfigured Divinity, ex-Miasma), Canadian guitarist Daniel McLellan and bass-player Denis Landry, and Necrophagist drummer Romain Goulon. Together, they’ve created some brain-scrambling, pulse-pounding, progressive-minded tech-death capable of re-wiring your neurons and firing their synapses at will. 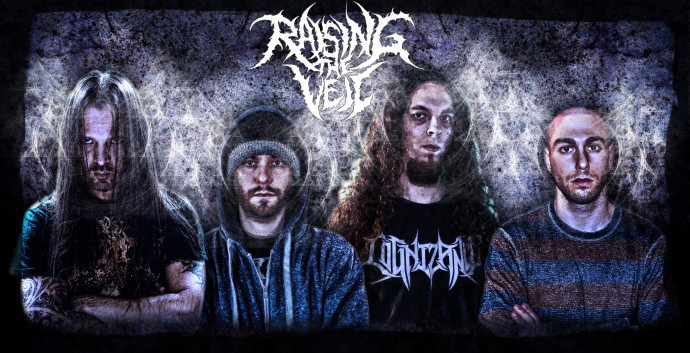 And for those who may be new to the song, I’ll repeat what I wrote earlier: It begins with the tinkling of piano keys and then swoops and soars through a multitude of changing soundscapes. You get start-stop rhythmic dynamics; a multitude of riffs that jab like a prize-fighter and lead guitar flurries that dart like swallows; nimble bass notes and hammering chords; sweeping melodic segments coupled with rising clean vocals; the subtle pulsing of electronics and the rippling of guitar tones (which sound like keyboards); and a mix of harsh growls and hair-raising shrieks.

Anchoring all this attention-grabbing musical variety is Romain Goulon’s expert drum performance, which matches the rest of the instrumental work in a constantly changing series of patterns and progressions.

The video provides lots of cosmic eye candy to keep you company while you listen, along with interesting renderings of a Daniel McLellan guitar play-through and George Wilfinger delivering vocals.

Bosonic Quantvm Phenomena is available now and can be ordered on CD (with related merch) at this location.

One Response to “AN NCS VIDEO PREMIERE: RAISING THE VEIL — “QUBIT COMPUTED MULTIVERSE””