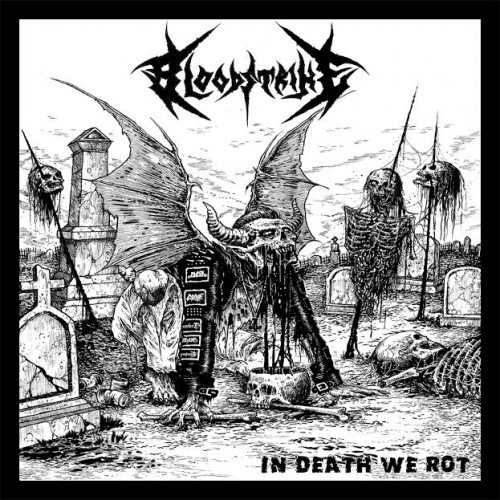 Almost exactly one year ago I discovered a two-song demo named Necrobirth by Colorado’s Bloodstrike that totally knocked me on my ass (as I said here).  At that point, the word was that Bloodstrike was working on a debut album that they projected for release this year — and now, sure enough, it’s upon us.

The name of the album is In Death We Rot, and it is nothing but Grade A nourishment for the death-worshipping souls of people like me, and all other fans of early ’90s death metal who haven’t convinced themselves that the only albums worth listening to were released 20 years ago.

The band’s roster is filled with people who’ve paid some dues, in other bands and in life in general. They do this not out of calculation, as if the on-going death metal revival were a cool trend worth following, but because they feel this music. You can tell just by listening to it.

Where to start? Well, let’s start with Holly Wedel’s voice. It’s a suppurating black mass of horror, a mix of gruesome roars and hair-raising howls that’s exactly what you want for this kind of music.

And man, the riffs on this album are massive, and massively infectious — huge sonic weapons that are both bludgeoning and festering with unearthly illness. The production of the album gives that welcome smoking chainsaw tone a gut-punching power, and the band wield that power in dynamic fashion, moving the music from slow, staggering, doom-heavy lurches to punk-powered stomps to furious thrashing rampages that will get all your nerve endings firing.

Bolstered by a rhythm section that’s machine-precise and spine-shakingly brutal, the band deliver one song after another that’s loaded with powerhouse grooves and yet also generates an atmosphere of earthly rot and supernatural malevolence. 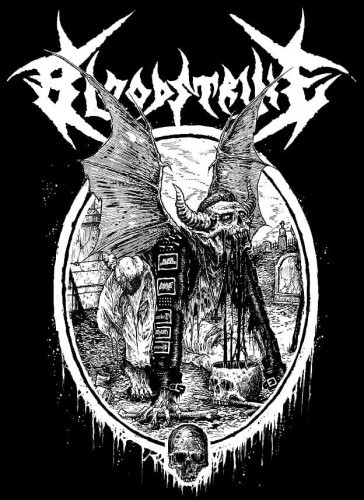 It’s called DEATH metal for a reason. You need the stench of decay in your nostrils, the feel of congealing gore up to your elbows, and the breath of risen corpses on your neck. If your mind doesn’t feel like it’s been converted into a maggot hatchery when you listen to music in this vein, then something critical is missing. Nothing’s missing on In Death We Rot.

Well, I guess you can tell that I’m in lust with this album. It’s one of the best offerings of old-school death metal you’ll find this year, pulling from both the Swedish and Florida schools in a way that’s faithful to the ancient diseased spirit of the genre and yet vibrantly alive.

Bloodstrike are doing it right, right down to including a cover of “Soulless” by Grave and emblazoning their album with skull-piercing, blood-drooling artwork by His Ghastliness, Mark Riddick. And on top of that, they had the album mixed by Patrick Bruss (Crypticus) and mastered by Ken Sorceron (Abigail Williams). Doing it right.

But hey, don’t take my word for it — prostrate yourselves and let this album run right over your prone body. All you have to do is press Play below. (And for your further entertainment, we’re also including the band’s official video for the song “Abomination”).

In Death We Rot will be released by Redefining Darkness Records on September 25 and it’s available for pre-order, both digitally and on CD, at this location:

6 Responses to “AN NCS ALBUM PREMIERE: BLOODSTRIKE: “IN DEATH WE ROT””