(We welcome Argentinian journalist Matías Gallardo, who brings us this interview with multi-instrumentalist, composer, and frontperson D.G. of the phenomenal Icelandic band Misþyrming.)

As ironic as it might sound, during the last couple of years Iceland has become a hotspot for black metal. To the work of bands like Svartidauði, Carpe Noctem, and Dynfari, we now have to add a new stellar name: Misþyrming.

Formed in Reykjavík back in 2013, the group (Icelandic for ‘abuse’) fronted by multi-instrumentalist D.G. is one of the most glorious revelations of the year within the genre. Capable of mixing the darkness of French anti-heroes like Deathspell Omega and Blut aus Nord with eerie atmospheres and a wicked sense of melody, the quartet’s debut album Söngvar elds go óreiðu (‘Songs of Fire and Chaos’) promises more than a cold chill to your spine. Brace yourselves: Misþyrming is coming.

The band just played in the Beyond the Gates festival in Norway a couple of weeks ago, so I wanted to start by asking you about this particular gig. Was it like you guys expected? How was the public’s reaction toward Misþyrming?

Playing in Bergen was exquisite. The staff treated us very well and we spent time with a lot of good people. We didn’t really know what to expect of the show, but the crowd’s reception was great, and we felt great. We did the Funeral Mist cover with Arioch on vocals, which made the show unique and unforgettable. Thankfully, we got to see some of the city, and we even went hiking. Bergen is one of the most beautiful places I’ve been to and I’d love to play there again.

What was the main idea behind forming Misþyrming?

I’ve been playing music with numerous bands since 2010. The idea of forming Misþyrming was having an output for my own music on my own terms. I do like to make music with other people and sharing ideas in other projects, but when it comes to the music that I make for Misþyrming, my vision is very clear. I don’t want other people’s input.

The band started as a solo project back in 2013, and then you decided to include Helgi from Carpe Noctem on drums. Nowadays, Misþyrming plays as a full band. How did guitarist Tómas (T.Í.) and bassist Gústaf (G.É.) join the band?

Originally, I intended to have Misþyrming only as a studio band. I talked to Helgi since I had to get a drummer to lay down the tracks for the album. I got to know him through Tómas, so when we decided to go further with the band and start playing live, Tómas was the obvious choice for a live guitarist.

Both Tómas and I play in Naðra with Gústaf, so he was around at the same time. We had another bass player in the beginning but he had to leave the band, so we talked straight to Gústaf to do the bass duties. I’m really happy to have these guys on board. They are great musicians and dear friends of mine.

Let’s talk about Söngvar elds og óreiðu. How was the songwriting process for the album?

I had already written a few songs before I formed the band. They were supposed to be used for my old band, but we split up. The split-up didn’t stop me from writing more material and recording demos, so in half-a-year I had the album ready for recording.

I met up with Helgi, who had learned the songs by ear, and we rehearsed them. When we were good to go, we went to a studio where I used to study recording and music engineering. When it comes to writing music for Misþyrming, I create a solitude-like atmosphere to work in. I have a small studio at home where I write and puzzle together riffs and drum parts in Guitar Pro. I like to have damped light and a cup of tea. When I have a song ready, I record a demo so it’s easier for the other members to learn.

What I like the most about the album is the combination of the most brutal moments and the eerie atmospheres featured on some of the tracks. There are even some cool melodies floating around the songs. What would you say are the inspirations behind the band’s music?

I get inspired by a lot of diverse music, mainly black metal obviously. I like the catharsis of playing (and listening to) music that has a massive, dark atmosphere. I used to be in a choir which inspired me a lot in combining chords and melodies of all sorts. A lively melody has a lot of character.

Artists are often afraid to name-drop bands they like, but I think that I can shamelessly say that I’ve been heavily inspired by bands such as Deathspell Omega, Funeral Mist, Iron Maiden, Svartidauði, Arizmenda, Blut aus Nord, Rammstein, and many others.

How’s the metal scene in Iceland? Is it fair to say that there is a mutual influence between Icelandic black metal bands?

The black metal scene in Iceland is alive and well these days, as many seem to have noticed. We, the people behind those bands, all know each other more or less since Iceland is such a small country. I don’t know if one could say that we’re all inspired by the same things, but we discuss music a lot together and often we share what we’re listening to with each other. In the end, each and every one has their own approach to their creation.

You’ve said Söngvar… was your first serious expansion as a developing musician. What are the things you’re getting off this band that you didn’t get in your other projects?

Being in full charge of things. That is, mostly my songwriting but also artwork and the appearance or image of the band. My music is very close to me and I don’t like it when it’s messed with.

I feel Misþyrming sound different from many black metal bands from the scene, which is great because it’s something really hard to accomplish with just one album. What would you say are the elements that separate your band from the rest of black metal? Would you even define your music as black metal?

What I think that Misþyrming has in common with many good bands is that we stay true to what we evaluate, and that keeps us original. Sadly, a lot of great bands get lost in the trends of black metal. I don’t know why somebody would like to do things that have been done a million times before, like using the old classic pentagram with visuals or the more recently popular snake and chalice-combo. There’s nothing special about that.

Being gimmick-free may be what separates us from so many black metal bands. Sure, I agree with people who say that Misþyrming is a black metal band. Misþyrming has the elements of black metal, the aggressive, cold atmosphere. But does it really matter to label bands by genre? What good does it do for consuming the music itself?

How do you see the live aspect of the band now that you’ve done some gigs here and there? How important is for you to play your music for a live audience?

Deciding to make Misþyrming a live band has created new challenges and opportunities. Playing this music live is a good way to go into catharsis, meditate, and get the most out of it. Doing it in front of a live audience is a good experience, to see how people are pleased by our outlet. We do our best on stage and our shows are well received, which is a friendly reminder that we’re probably doing something right.

Are you working on a follow up album yet? Any details you can give me?

Yes. Don’t expect it to sound like Söngvar elds og óreiðu. All I can say for now is that it will be fantastic. 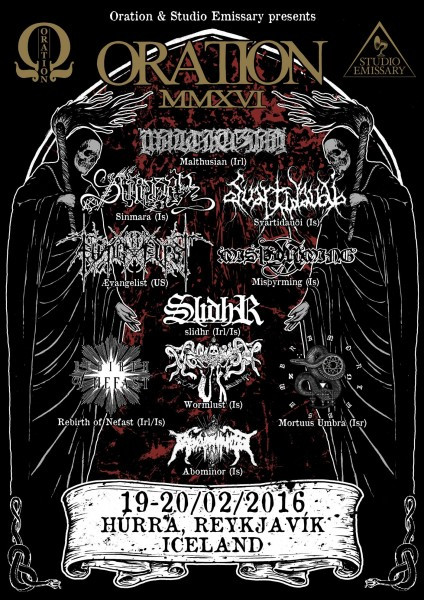