On Saturday morning I managed to scribble some notes and pull together a few photos from the first day of the festival (here). Though delayed for various reasons, this post will now focus on Saturday’s show, and before this week runs out I hope to prepare a feature on Sunday’s third and final day of the event.

I didn’t exactly get a bright and early start on Saturday. Friday was a long day for all of us who began it early in our own home towns, traveled to Oakland, and then stayed up well past midnight for the last band of the night. There’s also something about black-out curtains in a hotel room and no one else moving about that puts me into a deep coma. I haven’t slept for 9 hours in years, but I did on Friday night.

After lunch at an excellent Vegan soul food restaurant across the street from our hotel, we spent part of the afternoon hanging out in a different hotel with people from two of the bands who were set to perform that night (Antediluvian and Ævangelist), followed by drinking and eating and more drinking in order to fortify ourselves for the night ahead.

Once again, as on Friday, we got to the Oakland Metro too late to see the first bands of the night. But this was partly by design. The first band (Deceive) was scheduled to start at 3:30, at which point we were still enjoying our time talking at that other hotel.

At some point we would need to break for dinner, and the one thing I definitely did not want to do was take a break after 6:00 — because that’s when a trio of bands I absolutely did not want to miss were to begin playing. So in addition to missing Deceive, we also missed Skeletal Remains and Dispirit while having dinner, arriving shortly before 6:00 to catch the start of… 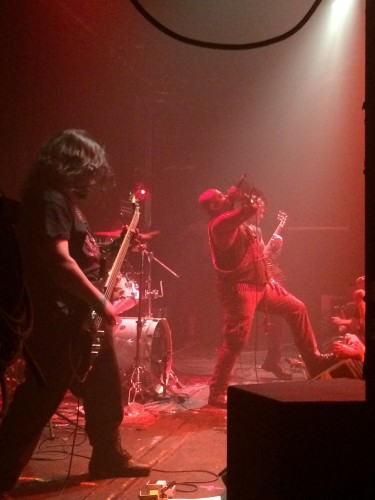 As I wrote in the first part of this CDF recap, P.L.F. narrowly edged out Despise You as the band I most enjoyed on Friday. Little did I know that P.L.F.’s amazing vocalist/guitarist Dave Callier was also the guitarist in Morbosidad (whose music I really like, though haven’t explored in depth). They were absolutely barbaric, a blackened death metal war machine unleashing non-stop savagery from start to finish.

They were fronted by original vocalist Tomas Stench, a menacing shaven-headed figure clad in gauntlets with six-inch spikes and crossed bandoliers fully loaded with bullets. When he wasn’t banging his head during instrumental breaks, he was spewing ghastliness with head thrown back like a wolf calling to his kind. He also set an unbound Bible on fire and tossed the smoldering pages into the audience. Since the pages didn’t fully ignite, some helpful audience members finished the job, starting a small bonfire in the mosh pit. Very cool way to start Saturday night. 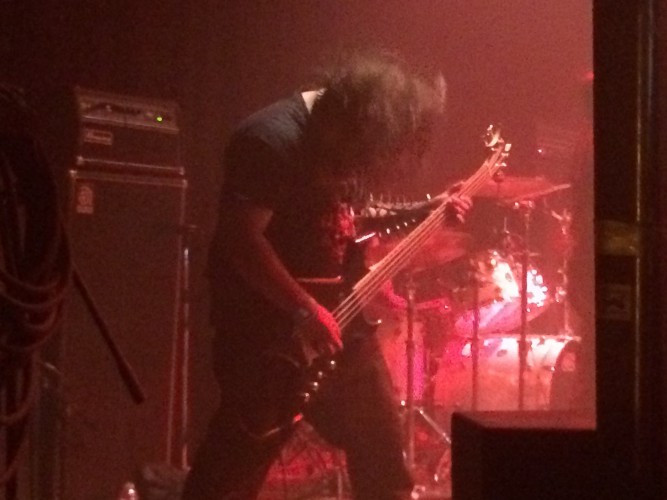 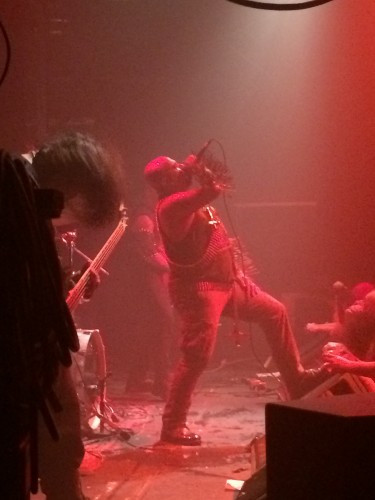 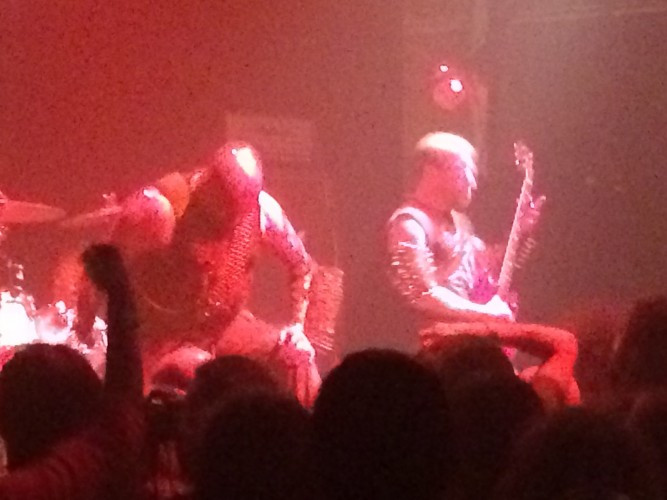 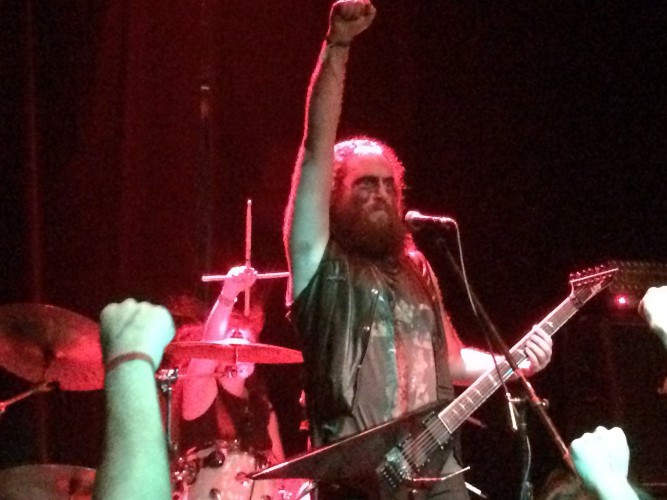 This Canadian group was the second of the trio of bands performing back-to-back that I absolutely did not want to miss (and after spending time talking with some of them a few hours earlier, I was even more eager to see their show).  With drummer Mars Sekhmet’s  long hair writhing above her like snakes (stirred by a fan in the increasingly beastly heat in the venue), she held up her drum sticks in an inverted cross and then a sonic armageddon descended on us all.

With his face smeared in charcoal and a fierce beard jutting in front of his intimidating face, frontman Haasiophis slowly uttered the lyrics in a truly cavernous growl while he and his bandmates spread monstrous black death like a plague. My foremost reaction, posted on Facebook soon after, still holds true in my memory: “Dismal detonations to wake the dead”. 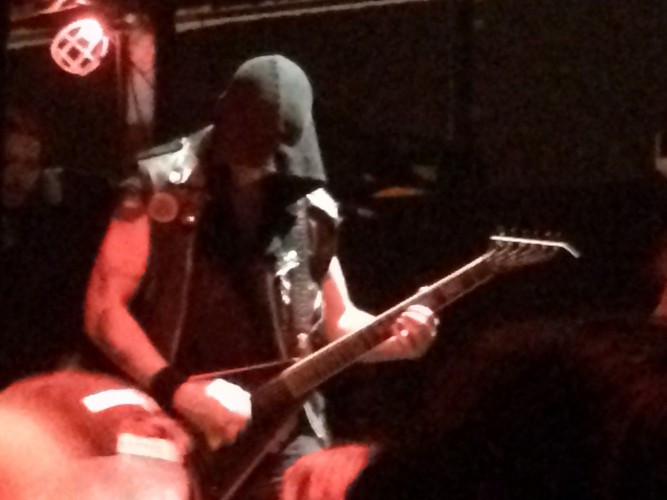 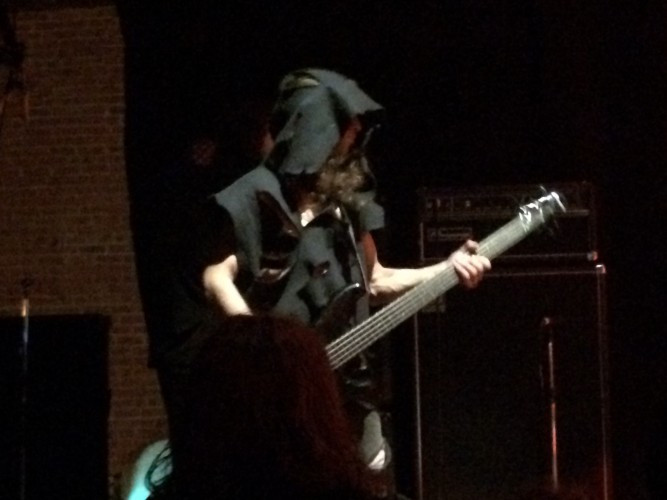 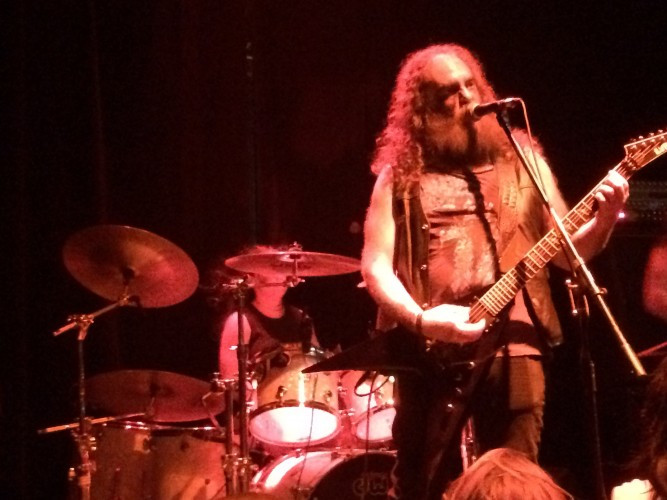 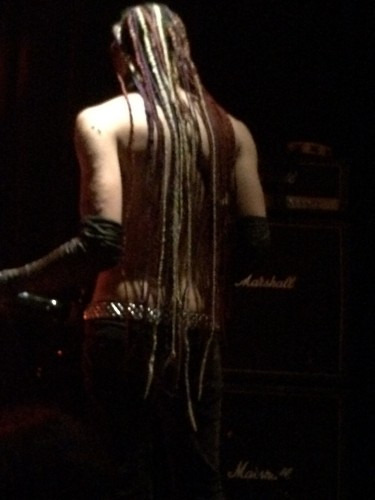 My Facebook post after seeing Ævangelist: “They’re nuking us from space. It’s the only way to be sure. (Also the best set of the festival for me so far.)” And indeed it was (though something happened on Sunday to challenge Ævangelist as the CDF highlight for me).

In retrospect, I think “nuking us from space” may not have been the best way of summing up the experience. It does capture the feelings of alien menace and haunting otherworldliness that the music inspired, and there were certainly times when the harrowing and wholly immersive typhoon of sound felt like a nuclear assault. But it’s too blunt a phrase, because the music was so multifaceted, multilayered, and strangely moving (as well as exhilarating). 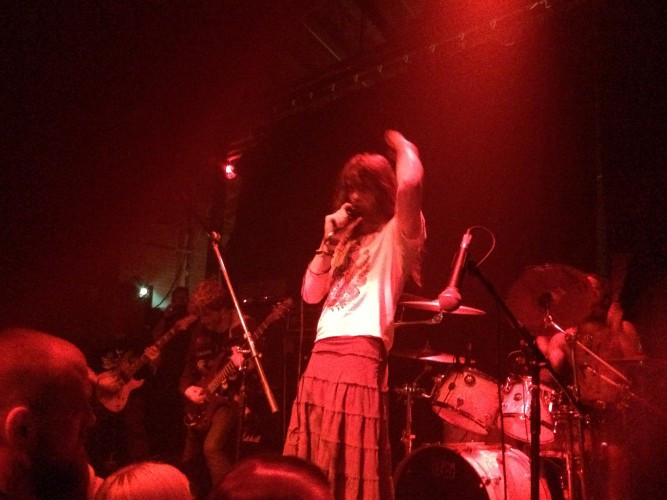 I was standing close to the stage directly in front of guitarist Matron Thorn (which explains why my cell phone photos of him are the best of a middling lot), and perhaps because his amps were right in front of me or perhaps because of my imagination, I was able to focus on his riffs in a far more concentrated way than on Ævangelist’s albums, and they were even more catchy and electrifying than I guess I had realized. The overall effect of what he was doing, combined with the array of other sounds coming from the stage, was overwhelming. 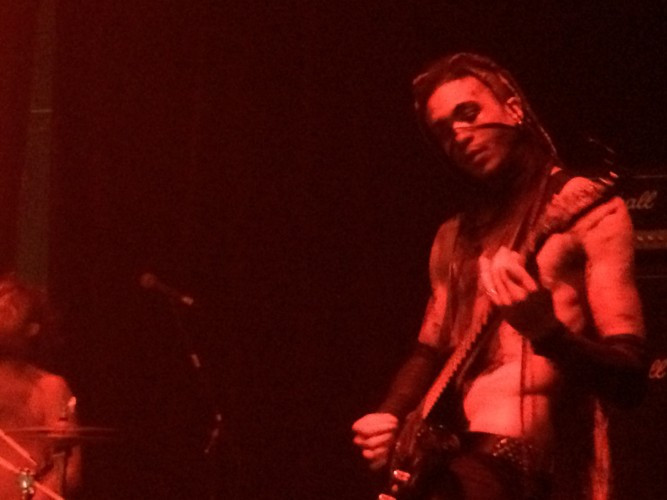 At some point afterward, I told a new acquaintance that, for me, the mark of the finest performances at a live show is when the music is so all-consuming that I forget where I am, that I get so lost in what I’m seeing and hearing that every other thought is blown out of my head. I saw lots of fine bands at this festival, but there weren’t many who had that effect on me. Ævangelist were one. 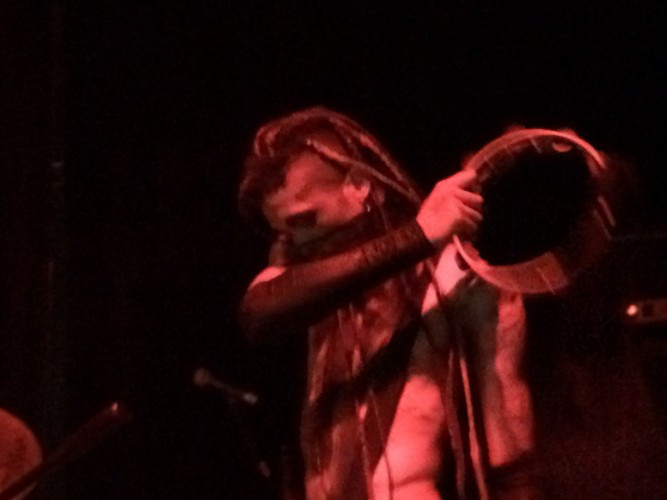 Part of that effect was attributable to the visual aspects of the band. They don’t all look like members of your typical metal band, and they were all very into their performances, almost constantly in motion. 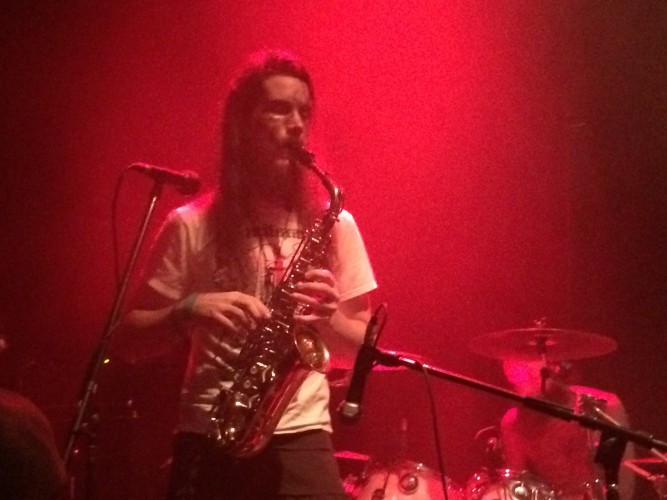 There was a lot of visual theater in their show; it was a cathartic experience listening to them, and it seemed as if it was a cathartic experience for them as performers, too — all the way up to the wrenching finale of the set, when they all collapsed on stage, one by one, capped by bassist Jon Rosenthal screaming his guts out (without a mic) and keyboardist Auditor destroying his keyboard (with his face) and throwing it to the floor. 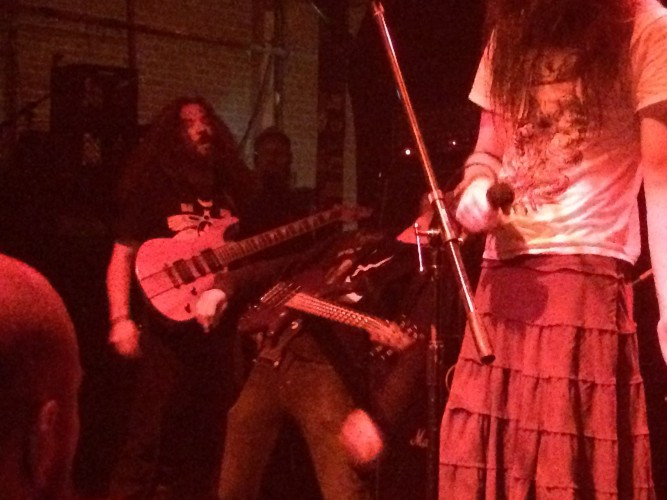 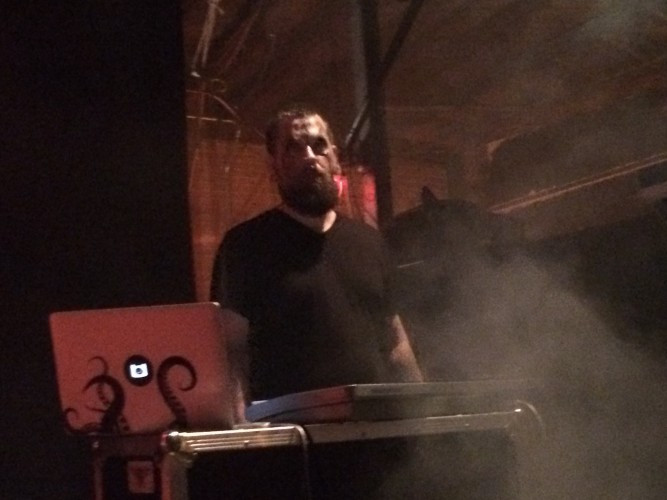 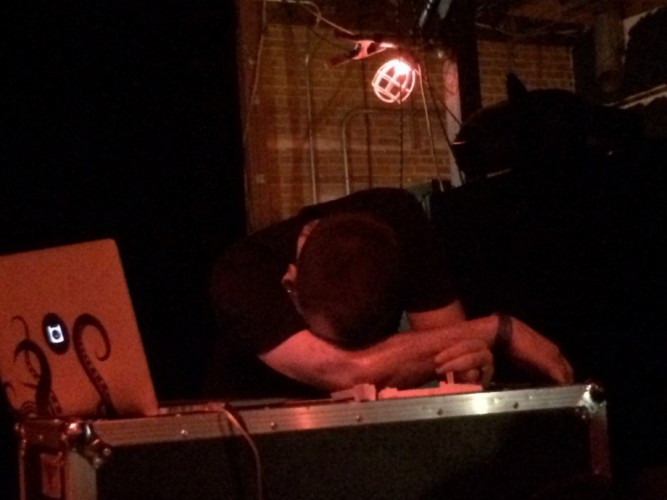 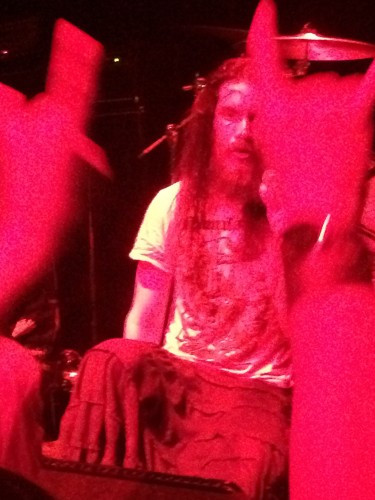 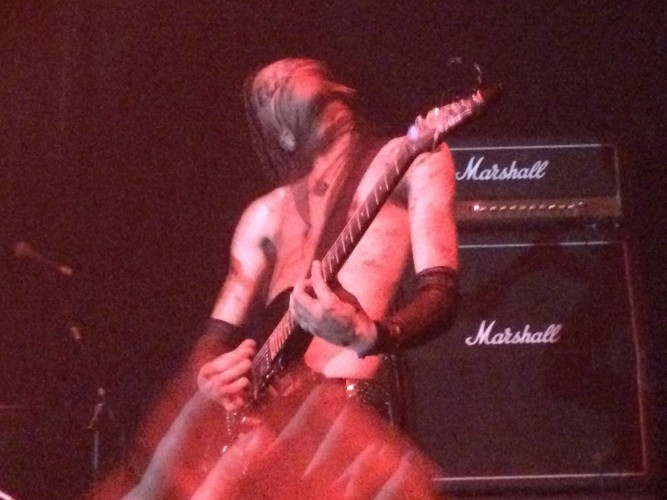 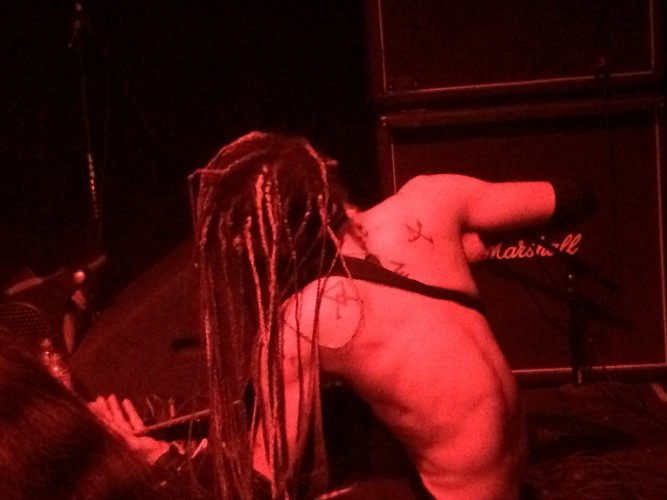 Here are a trio of videos — the first is from the final minutes of the set; the second one is from the start (and the picture quality gets better when the lights eventually come up); the third features the appearance of a demon saxophone (and the face of my man BadWolf).

Feeling pretty wrung out, and having seen Ghoul before at this year’s MDF, I went outside after Ævangelist and spent time talking and smoking during most of Ghoul’s set and also spent some time buying vinyl goodies in the merch room.

I came back to the main floor in time to see some of the new costumes that Ghoul’s “mascot” was wearing (at least they were different than when I saw them in May), but not in time to see them spray the front rows of the audience with green goo (I saw the aftermath of that). 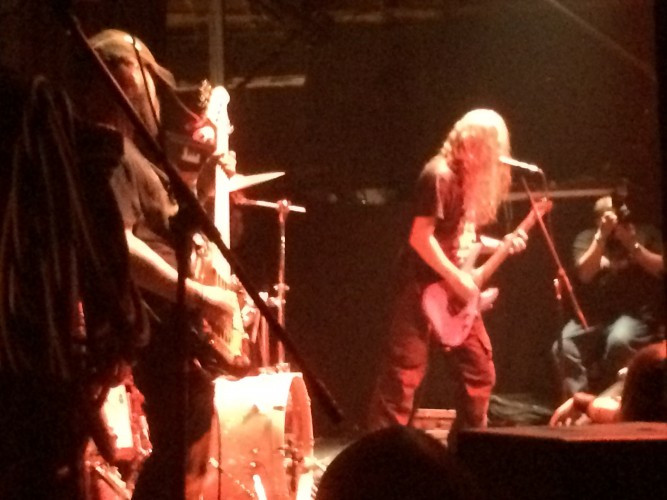 This Polish goregrind band have been around since the early ’90s, but I’m not that familiar with their music. They turned out to be a huge and pleasant surprise. It appears that only the drummer has been around since the beginning, but the whole band was a tornado of filth (in a good way) — slaughtering riffs and destructive rhythms delivered at speed.

And holy shit, guitarist/vocalist Pierścień delivered without doubt the most foul and disgusting gurgles and wretching sounds that I’ve ever heard coming from a man who wasn’t projectile vomiting at the time. 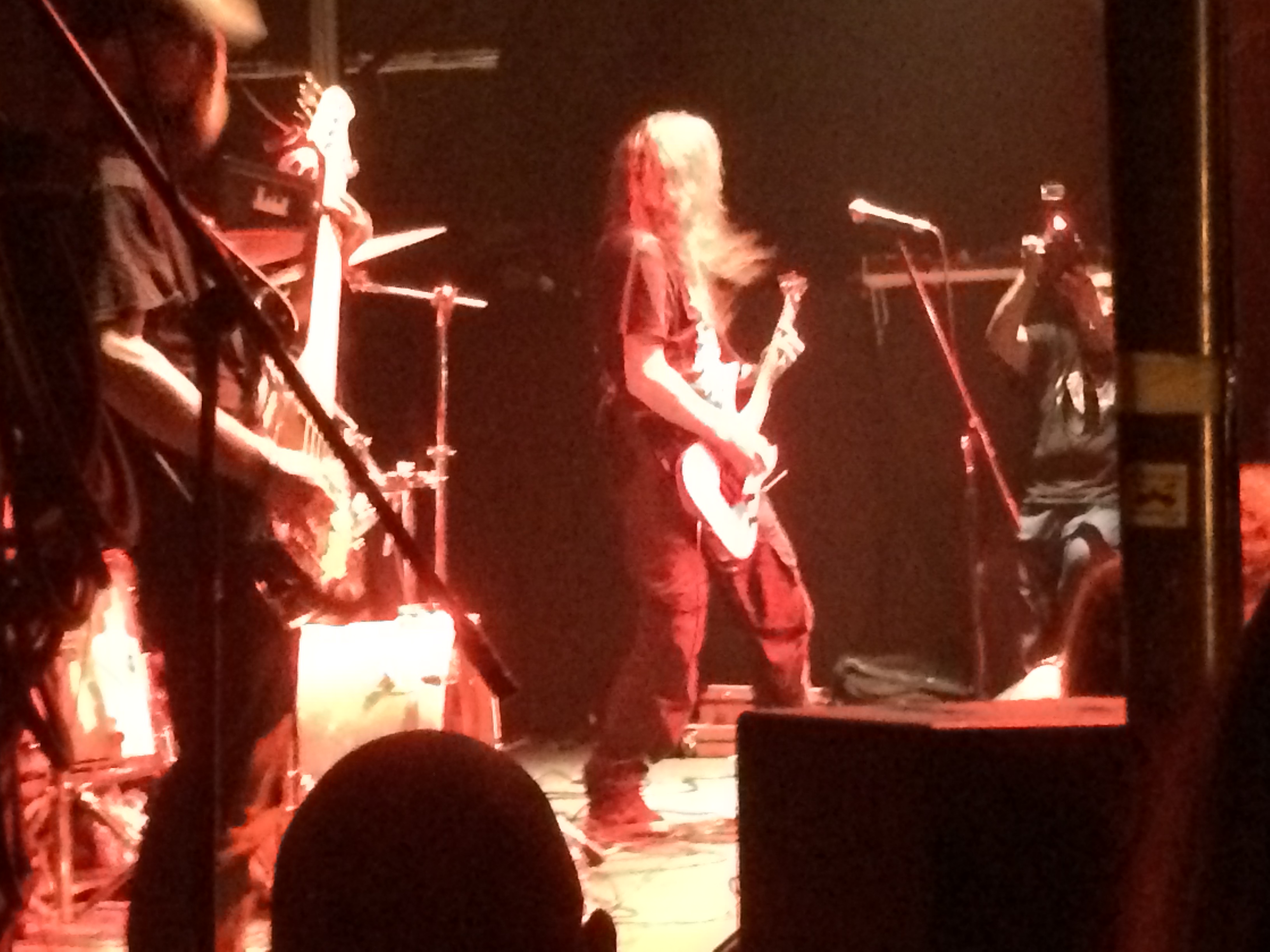 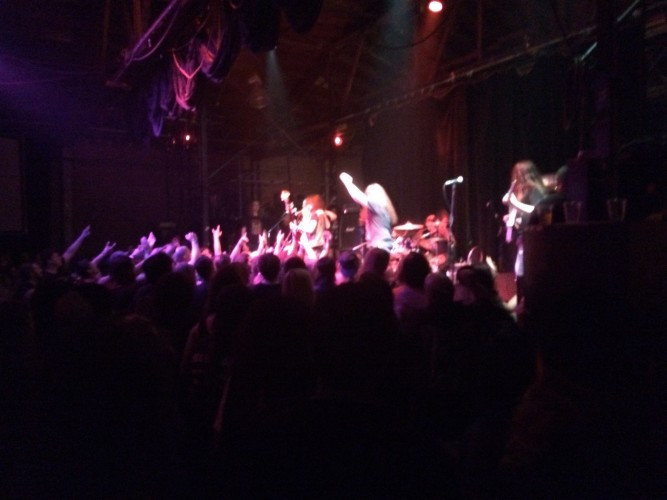 Although I missed most of Ghoul’s set, two of the dudes in that band (Ross Sewage and Sean “Bloodbath” McGrath) are also in Oakland-based Impaled — and I managed to miss a chunk of Impaled’s set while outside yakking again. What I did hear was a solid dose of brutal, bludgeoning, eviscerating, gory death/grind that got my adrenaline flowing.

Which was a good thing, because by this point I had reached the point when I was hot, sweaty, and worn out, with sore feet, sore back, and a sore neck. I was really fuckin’ ready for what came next. 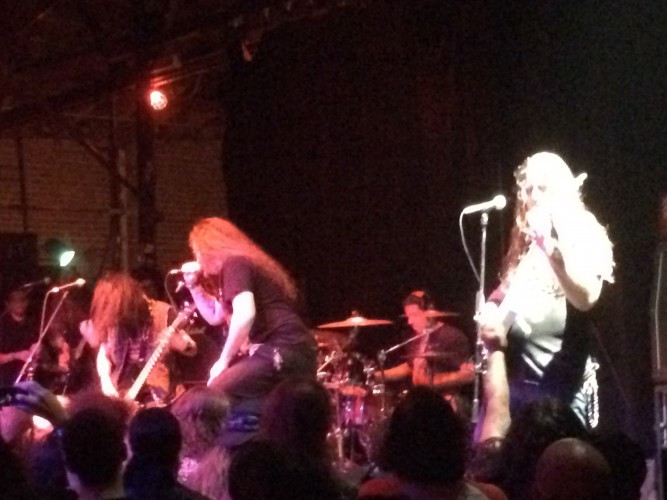 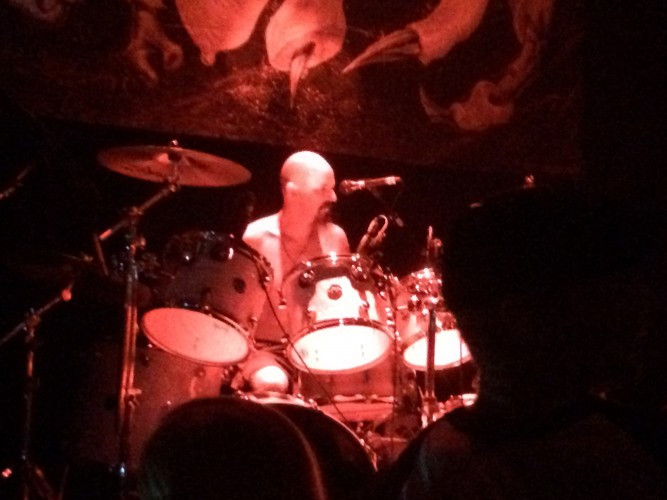 And what came next was Autopsy. I moved up front pretty soon after Impaled finished to get a good vantage point. I stood on about the second row of people over on the left side of the stage right in front of Eric Cutler, and then waited… and waited… and waited.

It was not a good time to be standing around waiting (see above re hot, sweaty, exhausted, and physically hurting), but there was a long lag, most of it apparently due to Mr. Cutler working with a sound tech on… who knows? Something. 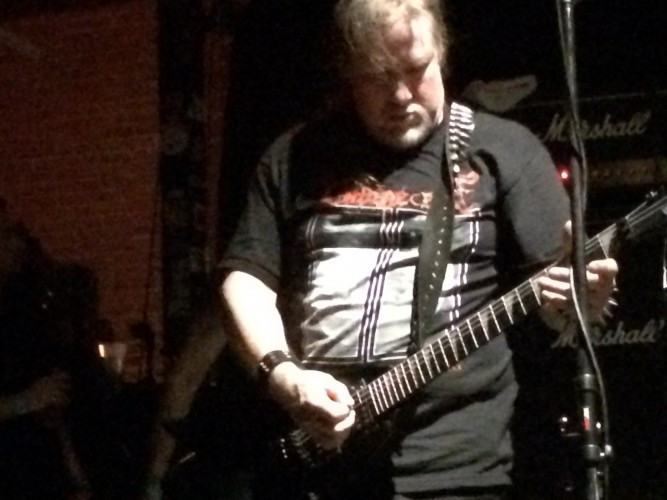 And then, of course, I wasn’t thinking too carefully about the fact that I was in the danger zone holding an arm full of vinyl albums and a couple of shirts. When the shit finally got going, the floor immediately turned into a seething mass of closely packed humanity. I was getting banged around so vigorously that I figured it was just a matter of time before my purchases got destroyed. 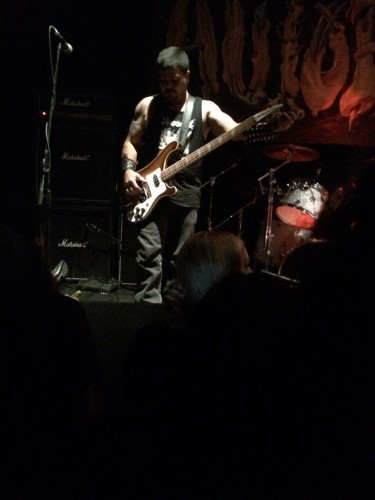 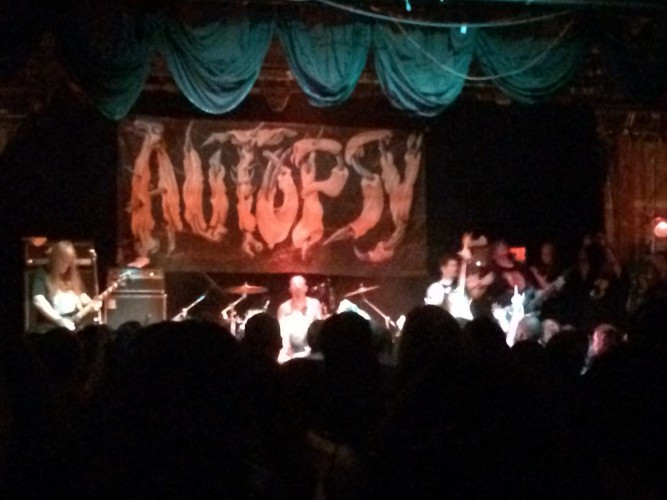