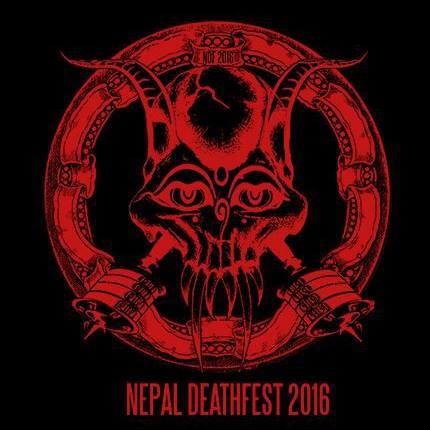 The small Himalayan nation of Nepal has experienced a staggering onslaught of natural disasters this year, with devastating earthquakes last spring that took more than 9,000 lives and injured many others. Yet the Nepalese are clearly a resilient people — including those in the community of metal. I’ve been fortunate to get to know some of those people via the internet, including Aabeg Gautam of Dying Out Flame, and through him I’ve learned of a metal festival in Nepal that I wanted to do my own small part to help publicize.

The festival is called Nepal Deathfest, and the third edition of the event is now scheduled to take place on January 22-23, 2016, in the capital city of Kathmandu. The second day of the festival will feature the long-running German death metal band Fleshcrawl as the headliner, and the Japanese noise/grind band Sete Star Sept will headline Day 1.

NervoChaos from Brazil and the afore-mentioned Dying out Flame from Nepal will co-headline Day 2, while Meat Train from England will co-headline the first day. One of the organizers, Zivon Gurung, further explains:

“The fest is divided into two days; Day 1 is purely dedicated to Grindcore and other extreme form of Metal while Day 2 is especially dedicated to Old School Metal, though a little mix up should not surprise anyone. NDF is very emotional to respectfully dedicate its stage to two of the most respected drummers that the metal world recently lost. Day 1 stage will be called ‘Martin Kearns Stage’ (Bolt Thrower) and Day 2 stage will be called ‘Jim Konya Stage’ (Nun Slaughter)”.

The other bands confirmed to play at the festival are: Rip Off (India), ROG, Childwife, Laash, Corpse Sick, Grenade, Asphyxiate, Undefined Human, Defleshed, and Nihility.

Even earthquakes cannot defeat metal! We wish everyone involved with this event great success and lots of good headbanging. For more details, visit these pages:

One Response to “NEPAL DEATHFEST!”