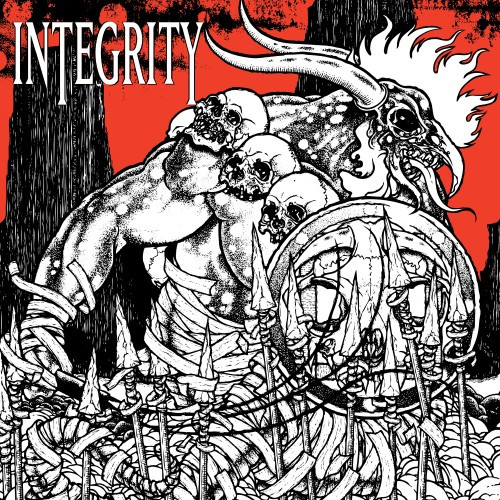 I heard about Cleveland’s Integrity long before I heard them. Other bands across a wide range of genres have dropped their name as an influence like I drop cigarette butts on the sidewalk. To this day, I get press releases pushing new bands because they sound (something) like Integrity. Integrity broke ground, and they broke minds.

Almost twenty years on from the release of the band’s landmark Humanity Is the Devil, Magic Bullet Records is releasing an anniversary edition of the EP. This edition features a new treatment of Pushead’s original album cover by artist Josh Bayer and comes with Dwid Hellion’s complete lyrics, along with an updated narration by him on the album’s last track.

And it has been remixed by Joel Grind (Toxic Holocaust) with guidance from Hellion and Integrity guitarist Aaron Melnick and remastered by Brad Boatright at Audiosiege — and that has brought an added power and immediacy to the recorded music that probably wasn’t even possible in 1995. 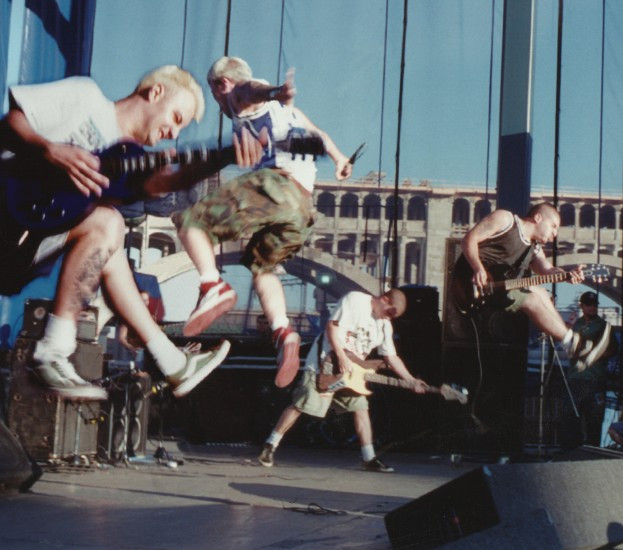 (photo by Tina Brugnoletti — back cover of Humanity)

I’m older than dirt, but I wasn’t listening to metal or hardcore when this EP came out. I heard the fallout from Humanity Is the Devil before I heard the detonation that produced it: This band, and this release in particular, are widely credited with spawning metalcore (which of course would eventually take turns into blandness that Integrity never would have predicted, or probably cared about).

I can’t imagine what this fusion of hardcore and metal must have sounded like in 1995 (I was listening to the likes of Filter, Green Day, and Alice In Chains). But I know what it sounds like now:

Hellion’s voice is a pure red fury (on the appropriately titled opening track, he does nothing but scream and roar), and he plays with lyrical ideas that must have been largely foreign to the hardcore and punk scenes of that day. His long closing sermon must have especially freaked people out.

Aaron Melnick’s riffs and leads range from pneumatic blunt force trauma to slow, soulful, and bluesy metal to adrenaline-surging speedfests, and the melodies that often ooze from the music are downright dark, doomed, and poisonous.

And this is a multi-faceted and even experimental album. No two tracks are alike. It’s as if the band were spreading their wings, seeing how far they could take themselves from where they started without completely breaking the tether. They found new territories for sure. Though the trails they blazed have been explored by many others since the original release, Humanity… remains to this day a fascinating and potent piece of art, well-deserving of this updated anniversary release.