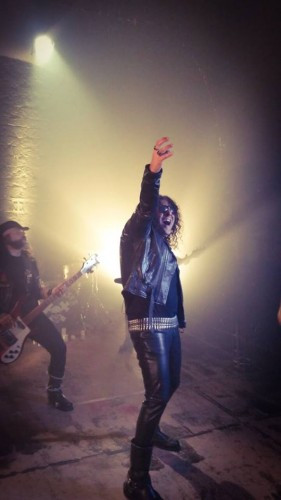 (Here we have another doomy interview from our Russian friend Comrade Aleks, speaking this time with Nicola “Cynar” Rossi, vocalist for Italy’s Doomraiser.)

Sometimes I think: “Stop! Never again! That was my last interview with an Italian doom band. There are a lot of good bands in other countries!” I go to bed with this thought, but everything changes when I wake up in the morning and see the horse’s head next to my pillow.

Doomraiser is one of the most heavy, most straight-out, most active and prolific doom clans from the Apennine Peninsula. They released their fourth album Reverse (Passaggio inverso) in 2015 and they are already busy preparing new songs. Somehow their frontman Nicola “Cynar” Rossi found a few minutes to answer my questions.

Hi Nicola! How are you? What is the Doomraiser crew doing now?

Hi! Everything’s fine thanks, right now the band is busy in writing new material for the next studio album. 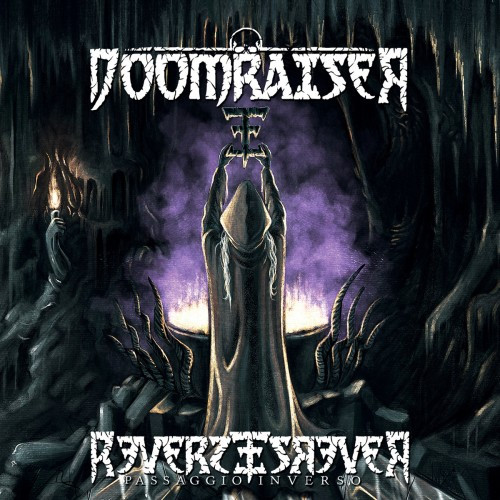 BloodRock Records released your fourth album Reverse (Passaggio inverso) in January 2015. How did this album change the band’s positions in the doom scene? Was it more successful than the Mountains of Madness album from your point of view?

Every record has its own soul and its own personal history. Ideas and positions change with time, with everyday artistic dynamics, so it is hard for me to judge or to have a definite position on our albums.

I believe that one of the important elements of each audio record is an interesting, catchy art-work. The cover art for each of Doomraiser’s last three albums has some hooded man as a central figure. Who is it? What does it symbolize?

The figure, which is always present in our cover artworks, is the entity Doomraiser, which is the energetic blending of each element of the band, focused on an enigmatic subject that shows itself, although not entirely. It’s the spirit of the band itself that appears in each and every album, the spiritual addition of our journey. It’s shady and obscure since the journey is a path in the dark ways of the spirit, in the darkest depths of thought.

The Italian doom scene is known for its old school progressive roots, so I wonder how did it happen that Doomraiser avoids this rule? It seems that Reverse (Passaggio inverso) has mostly other influences. Sometimes it sounds really sludgy, and at the same time the sound is deep, saturated, and heavy overall.

Italy is not just a “prog country”: Italy is also the mother of a certain dark / doom sound which is unique in its genre, and we find that it is right for everyone to have their own influences without gaining inspiration from something or someone in particular. We have always looked for a personal dimension of our own in music, and we have our own interpretation of it, so this helped us to forge our trademark.

Speaking about influence — I’ve heard that Mountains of Madness isn’t totally based on Lovecraft’s story with the same name, is that right? The lyrics of title song have a lot of in common with this story, I think…

Let’s say Lovecraft’s novel has given the start and has been the engine which inspired the arguments behind Mountains of Madness, which is that many of the megalithic areas (statues, monumental ritual areas, temples, etc.) we find lost in so many zones around the globe were built with a logic and an engineering that is far away from modern knowledge, so different from ours and that we actually don’t really know. If we knew these techniques, they could in the future let the whole thinking framework of our world collapse (everyone would go crazy!!), ’cause we would have to face ideas and theories so far from the dyamics of our dimension. With this, I mean that there surely have been ancient populations, which were completely different from us, in complete harmony with nature. The world is the real knowledge; we have completely lost the correct route — what we call progress is nothing but spiritual regress.

Nicola, how do you share responsibilities between yourself and BloodRock?

We have a complete trusting relationship with Enrico Bloodrock, made of respect and above all friendship. It’s been so many years since our cooperation began, and we have always kept a great contact both in professional and personal life.

I have two standard questions for all bands, so first of all can you tell a story about one particular song from the Reverse (Passaggio inverso) album?

“Dio inverso (Reverse)”: Our “Dio Inverso” (reversed god) is the concept itself of the “Reverse”. It’s the path that guides to knowledge, going through a way that is influenced by the black depths of everyone’s intimacy; it’s a path in which many dark scary ways cross, in which everyone enters boldly but comes to the real essence of things only after the crossing. Just after crossing the abyss of darkness, we can understand the real light. 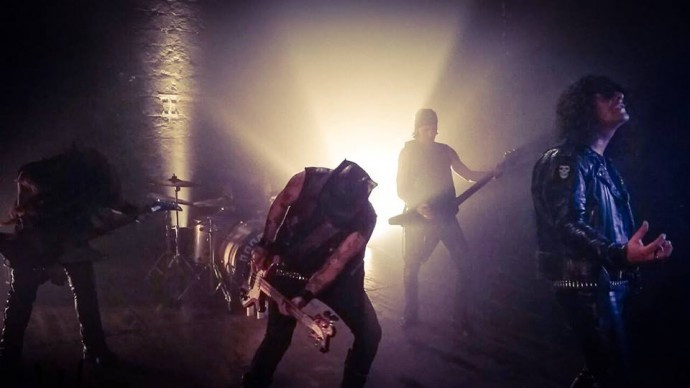 And the second one is about your favorite book from school years. Do you have some?

It has always been Les fleurs du mal from Charles Baudelaire!!

Man, I saw the band’s live photos, and it looks like Doomraiser really love to play gigs, but I didn’t find any tour dates for the last months of 2015? Don’t you plan to hit the road and visit some festivals?

This year we’ve been touring Europe right after the album was released. We played in Norway’s Inferno Festival and we toured with Angel Witch in the Italian section of their tour, so let’s say we’re ok for the first part of the year. In the meantime we started writing new material and we’re looking forward to playing in some summer festivals in 2016.

What was your biggest fest? And what are your most positive and negative memories of touring with Doomraiser?

Perhaps the Doom Shall Rise in Germany, 2006. The atmosphere was fantastic and we played for an entire population of doomsters, coming from all over Europe. I only have positive memories of past shows. We have lots of fun on the road — I could write a book about it hahaha… 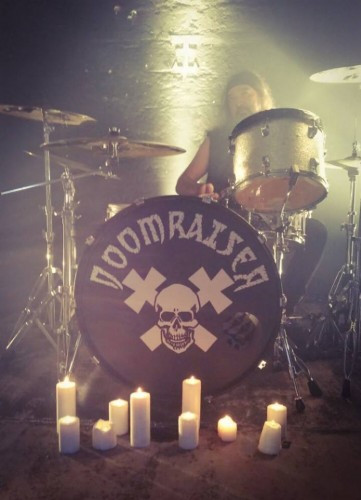 Nicola, how did you appear in Thomas Chaste’s project Witchfield?

Andrea Vianelli wrote to me saying that he would be happy to have me as a guest on his new album. I was of course very happy with it since I’ve always loved the music and art from Chaste & company.

Nicola, you and Daniele also play in the Black Land band, and the band hasn’t been active since 2012 it seems. What’s its current status?

Actually the Black Land project is still alive, but we had to put it aside for some member’s personal problems, hoping to have the time and will to put it back together in a complete way as soon as possible. In the meantime we are working on a new album.

Doomraiser usually releases split-albums between full-length works. You already had such records with Midryasi, Earthride, and Caronte? Who will be next?

Not any plans yet on this side, we will work on it later on.