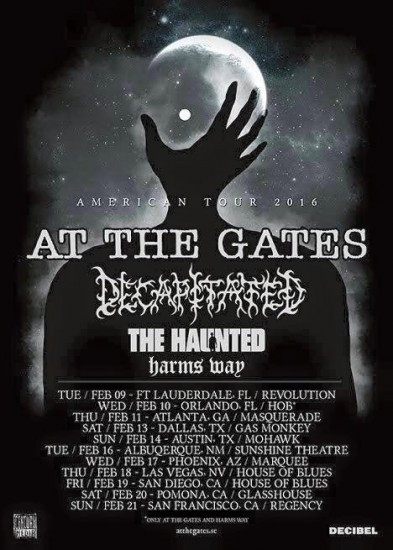 If you haven’t noticed, we don’t make an effort to keep you fully informed of newsy announcements, including tour announcements. There are only so many hours in the day, and some of those must be devoted to things like eating, sleeping, evacuation of bodily waste, and punching the clock for people who expect us to earn our salaries and could care less about our precious metal blog.

However, I did spy a couple of mainly U.S. tour announcements yesterday that I thought were worth publicizing, even at the cost of evacuating some waste in my chair to make up for the time required to prepare this post. Hard choices.

AT THE GATES – DECAPITATED – THE HAUNTED – HARMS WAY

The first tour, which was announced yesterday, will happen in February and is headlined by Sweden’s At the Gates and includes for almost all the appearances Decapitated (Poland), The Haunted (Sweden), and Harms Way (Chicago). I presume none of these bands needs an introduction.

I say “almost all the appearances” because Decapitated and The Haunted apparently won’t be allowed to perform at the House of Blues in Orlando, which is located within the confines of Disney World. Not sure how these lines are being drawn, but ours is not to wonder why.

I would also note that this tour seems to be allergic to the Pacific Northwest, which is of concern to me and therefore must be of vital interest to all of you.

By the way, DECIBEL magazine is running a ticket give-away for the tour. For details about that, go HERE. 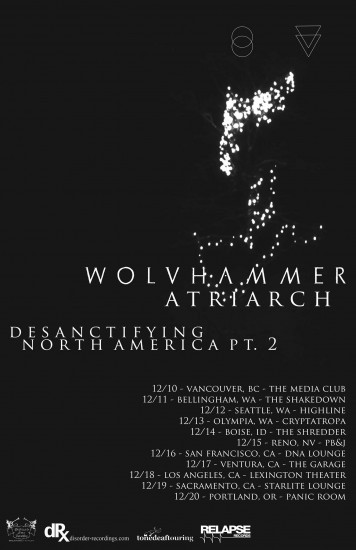 This next tour is a regional rather than a national one, but it is clearly superior to the first tour described above in that it will stop in Seattle (as well as 10 other fine communities in the U.S. and Canada, including Sacramento, which will give my comrade DGR an excuse to crawl from his man-cave and headbang a bit).

The participants in the tour are also two very fine bands, Wolvhammer (whose members are now split between the Pacific Northwest and Minnesota) and Atriarch from Portland, Oregon.

Because there is probably some greater chance that some of you will not be as familiar with these bands as those in the first-listed tour, I’m going to include some music streams after the tour schedule — Wolvhammer’s 2014 album on Profound Lore, Clawing Into Black Sun, and Atriarch’s 2014 album on the Relapse label, An Unending Pathway. Both are well worth your time (and your money).

P.S. I saw a post on Wolvhammer’s FB page that they’re planning to do some demo recording later this year. Maybe we’ll get to hear something from that on this tour. Please?