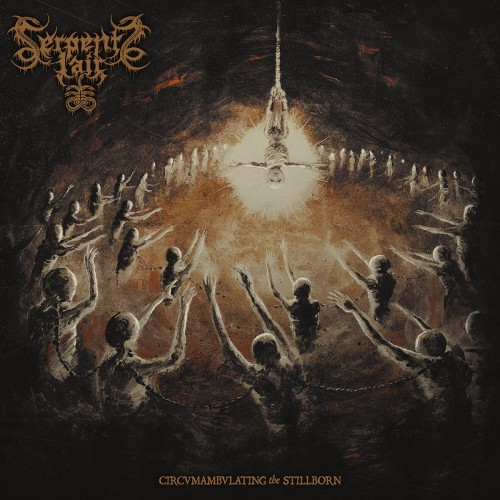 Last year I reviewed an impressive first demo by a mysterious hooded group from Sjælland, Denmark, named Serpents Lair. Now the band have completed their debut full-length, a seven-track, 43-minute album entitled Circumambulating the Stillborn that becomes available for download and physical pre-order today. In this post you’ll have a chance to stream the entire album for the first time. And if you’d like a preview of what you’re getting yourselves into, read on.

Following an introductory track consisting of beautiful choral voices and the slow, muffled pounding of timpani, Serpents Lair deliver five mostly long songs and an instrumental interlude. The songs are richly textured, dynamic in their pacing, and wholly unsettling. 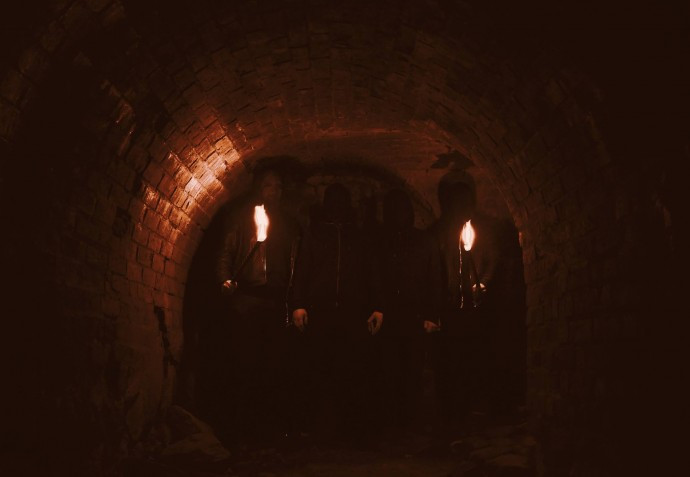 Take, for example, “The Serpentine Gnosis”. A slow, rattling, reverberating drumbeat leads to a dismal, discordant chord progression. The drums accelerate into a hard-driving rhythm, the riffs begin to slash, the vocalist snarls, howls, and shrieks, venting his derangement. The rhythm slows, the bass bubbles to the surface, the lead guitar begins buzzing like a hornet swarm, the atmosphere is one of predatory menace and encroaching doom. Back and forth the music flows, building an aura of otherworldly eeriness.

Throughout the album, Serpents Lair rely on dissonant riffs and strange, writhing melodies, moving between moments of head-whipping frenzy and staggering funereal lurches, between galvanizing assaults and passages of slow, strangulating peril. The haze of distorted guitar chords envelops the listener in a poisonous fog of sound, crating a malignant atmosphere choked with arcane, psychoactive vapors that seem highly hazardous to your health.

On this album the role of the pulsating bass is on equal footing with the guitars and the drums. The album is produced in a way that allows the listener to sink deeply into the disorienting yet immersive atmosphere of the music, yet still notice each of the ingredients that have been added to create this powerful sonic potion — and that’s one reason the album is worth revisiting: The more you listen, the more you notice new aspects of the sound.

The last two tracks on the album create the most distinctive contrast in a record that’s full of contrasts. “Dwelling on the Threshold of Tartarus” is the instrumental interlude mentioned earlier. Slow, discordant guitar notes doused in distortion mesh with slow booming drumbeats and bass rhythms, leavened with a bereft guitar melody that’s one of the few that doesn’t employ dissonance on the album. The music is more doom than black metal.

And then that’s followed by “Devouring Wrathe”, a powerhouse of frenzied, fiery, unhinged black metal that’s also catchy as hell. And it’s also a fine example of the vocalist’s ability to turn himself inside out — mixing barbed-wire snarls, demented roars, skin-splitting shrieks, and inflamed yells.

Heavy, powerful, intricate, and haunting, Circumambulating the Stillborn is a striking debut full-length that should vault Serpents Lair onto the list of modern black metal bands worth watching closely.

Circumambulating the Stillborn will become available as an LP in December/January through Fallen Empire Records (US) and Duplicate Records (Norway). A CD version will be coming in January 2016 via Hellthrasher Productions. The album was mastered by Tore Stjerna at Necromorbus Studio and features an album cover by the talented artist known as Misanthropic-Art.

To pre-order the album on vinyl, go here:

And to pick up vinyl for the Serpents Lair demo, go here:

The album can be downloaded digitally now, at this location: