By my lights, 2015 hasn’t been a big year for doom. Doom releases have been sparse, and when I say doom I am not talking retro stoner crap, but something that crushes your spirit in a mournful manner. I am pleased to say that the Finnish Doom merchants of Hooded Menace continue to bring it.

They come from the more deathly school of doom but their riffs still weep blood, so the death metal influence doesn’t bother me here. Speaking of weep, most bands would bore you to tears with a twelve-minute opener, but these guys suspend time and keep you in the moment. They are not afraid of picking up the pace without losing their grasp of darkness by going into a stoner rock boogie. Even when indulging in weird breakdowns they maintain their momentum. 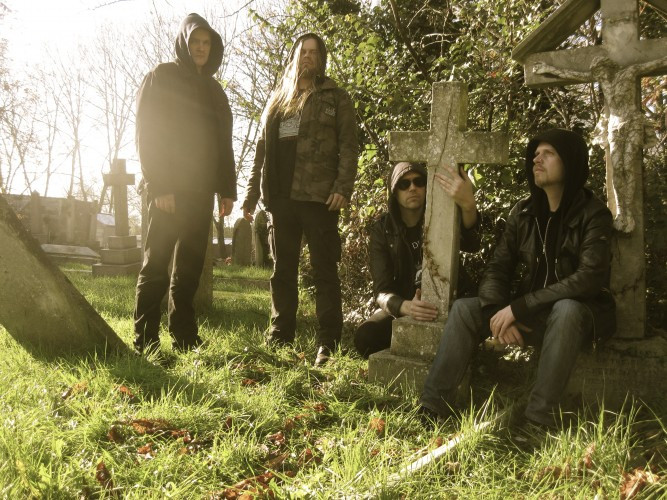 The morbid ten-minute dirge “Elysium of Dripping Death” finds the vocals in a low gurgle and the guitars maintaining enough chug to defy genre lines and leave you wondering if this is funereal doom or not. The drummer’s double bass keeps the songs from getting mired down in their own misery, and the guitar melodies help add to this sense of motion while the songs gather steam.

Not unlike Pallbearer, their riffs sometimes carry an angular edge with dazzling guitar work erupting from the rumble. They are not afraid to add a dash of technicality to the intro of “Ashen With Solemn Decay”. They do drone out on this one and wake me back up at the guitar solo.

The album ends with a heavier roar on “Beyond Deserted Flesh”. The low-tuned chug carries more death metal than the other songs. The well-layered guitars give the needed punch to the album after hitting the twilight zone on the previous song. They eventually lock into an almost classic metal vibe when they break into a timeless gallop.

Metalheads of every ilk will find something to bang their heads to on this album. The long-winded songs do not drag, establishing these guys alongside the likes of Evoken and Pallbearer with this one. They have gone above and beyond by not just being satisfied with being heavy, but writing good songs that challenge their playing and the listener.

Darkness Drips Forth is out now on the Relapse label and can be streamed, ordered, and downloaded via Bandcamp: