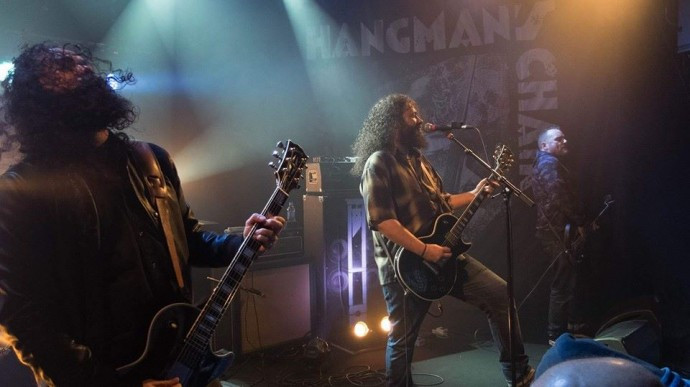 (Comrade Aleks brings us another interview, this time with Julien Rour Chanut, guitarist of the French band Hangman’s Chair.)

This is one of the most nihilistic, dirty, and desperate doom outfits from France. Hangman’s Chair was born in 2005 and proved their skills with three full-length albums until now. These are hymns of outcasts, confessions of the addicted, a portrayal of crude reality from the backyard of a city’s daily life.

The reason for this interview with Julien Rour Chanut, the band’s guitarist, is the release of Hangman’s Chair’s new album This Is Not Supposed To Be Positive on Musicfearsatan Records. Another murky reflection in a cracked mirror of our lives… Another expressive art-work, another handful of depressive and realistic tunes from the underground of suburban Paris.

Salute Julien! How are you? What’s Hangman’s Chair’s current status?

We’re quite busy these days, we have just played our release party last week, which went really good. And trying our best to promote our album properly this time.

You’ve just released the fourth full length album This Is Not Supposed To Be Positive. What do you feel? Joy from the realization that the work is done, or relief after putting it all out?

Musically, that was an album easy to realize. We knew exactly where we were going and what we wanted. So there’s no relief or any kind of feelings like this, we’re just proud that what we have planned came true. Now, we’re working on the right show setlists that could represent our new album and the rest of our discography. 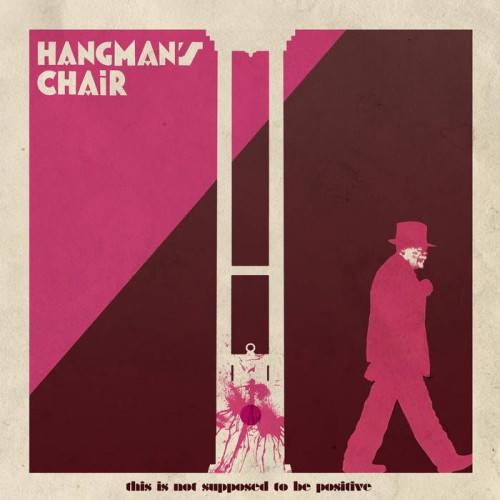 Once again we see this pale ghostly figure in a tall hat on Hangman’s Chair’s art-work. Who is it? What does this figure symbolize?

The artwork was made by Dave Decat — he also did the design of Hope///Dope///Rope. When we went to his home to work on the cover, we just had the idea of a guillotine, and he told us that he had something for us that would fit perfectly with us. We pledge to him full support and place great confidence in his abilities and his tastes, he totally understands what we want.

The character on the cover is Anatole Deibler, the infamous French hangman. It’s not the same character on H///D///R who was some typical Parisian apache of the early 20th century. 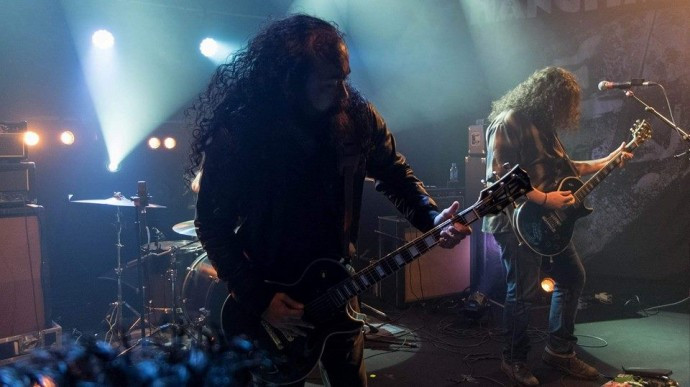 The Hangman’s Chair texts are mostly connected with stories of people thrown away by society, as outcasts. Why did you choose this topic? What drove you to write about addicts, criminals, homeless people?

We mostly talk about self-destruction, that can be caused by and also the consequences of love, drugs, paranoia. That’s our subject of choice and our favorite topics because that’s our own personal passions. I just find it fascinating how sometimes people, including me, find the way to destroy themselves. It’s somehow beautiful.

The band plays these stories very naturally and felt-through, as if you are really into it. How much of yourself is in it? How much of your own experience is in your songs?

All the lyrics are us, it’s about what we live, what I live, what my close friends live. If you’re talking about drugs, yes we do it and we like it; if you’re talking about being down in a hole, yes we’ve been there. But as you can see, I always move a step backward and look at the totality of the aspects of my life. And I’m alive, colder and stronger each time, but still alive.

Our conception of production has evolved a lot since the first album. (a lament for…) The Addicts and Leaving Paris were both recorded “live”. That is to say, we were playing all together at the same time and in the same room, only the vocals and solos were added after. That was a choice, at that time what was important for us was to capture that intensity and energy we had playing “live”. But working like that makes it difficult for the sound engineer to improve the quality of the sound, as the guitar sound will reflect on the drum sound and the bass as well.

So we decided for Hope///Dope///Rope to record just the drums and the rhythm guitar in the same room at the same time. And then for TINSTBP, we recorded all the instruments separately, which means a much more defined sound and a lot of overdub guitars. As we’re constantly working on the atmosphere and the ambiance of the songs, that was a necessary thing to do. In fact, we always had this sense of melody, but with our sound now it’s highlighted. 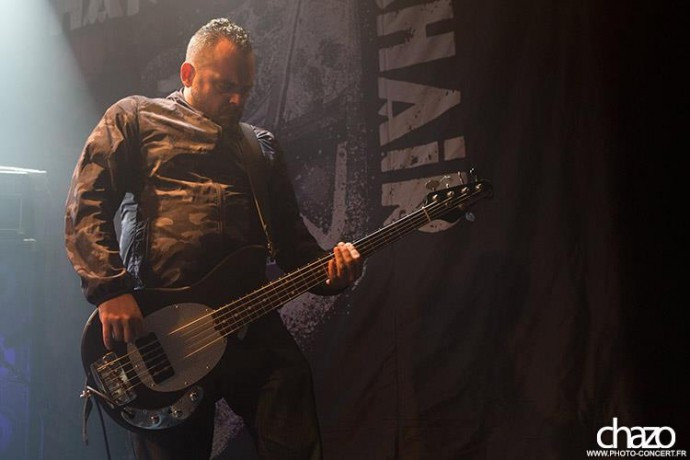 By the way, how did you record This Is Not Supposed To Be Positive? Is the recording session a calm process for you? Is everyone usually agreed with the direction the band takes with each new record?

Hangman’s Chair is quite a dictatorship, with me and Mehdi deciding everything musically. We both know where we’re going and how Hangman should sound.   It is much calmer now as everyone knows his role to play. But I’m not telling you that Clément and Cédric have nothing to say. They’re very important because, first they accept this situation, and secondly they are essential to the well-being of the band as we are all complementary.

Leaving Paris and Hope///Dope///Rope were also released as vinyl. Is there any chance to see This Is Not Supposed To Be Positive on this format as well?

TINSTBP is already out in a pink splatter vinyl limited edition and a standard vinyl edition. It’s available on MusicFearSatan Records.

Hangman’s Chair have reached their tenth anniversary in 2015. What do you feel looking back on the road you have traveled?

Indeed, HMC has been on the road for 10 years, but you know we started to play music together back in 1994 in a different band but with the same basis, so it’s more a 20-year road that we’re still on. I feel proud of being able to play together and to still be friends after all these years.

Do you plan to celebrate this anniversary with a tour or another extra-release?

No, nothing special, we have enough work to do with the new album right now.

The only thing we would like to extra-release would be the H///D///R CD edition, as the first edition was in vinyl. It should be out for early 2016.

A year ago you also released a split album with Acid Deathtrip. How did you cross with these men and come to the idea of such a collaboration? It seems that the conception of Acid Deathtrip suits the one you have for Hangman’s Chair.

We were playing a festival in The Netherlands with Blind To Faith on the bill. We are fans of BTF, so we started to talk together and the connection went really easy; I feel we have the same background. Then Robb, the drummer, told us he had another band more in the vein of HMC and he talked about a collaboration. We were of course really excited about doing this. And that’s how that split LP came up. 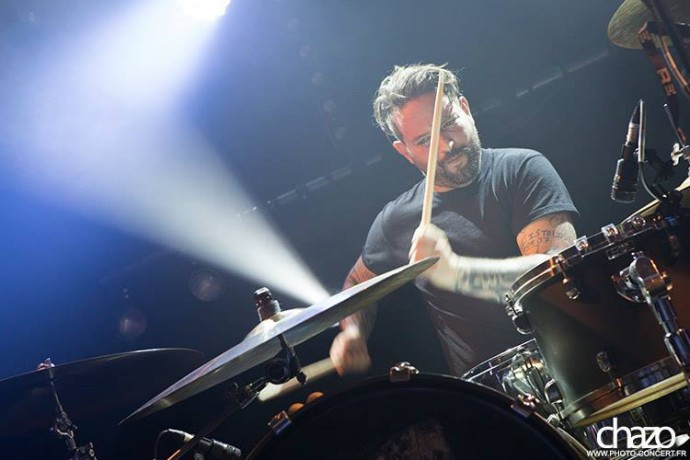 It seems that you do splits regularly: The first it was a split with Eibon, then another one with Drawers, and now – with Acid Deathtrip. Can you say that you tend to do it with your friends or at least with thinking-alike bands? Do you plan to release another split in the forthcoming future?

Each split has a reason: Eibon are long-time friends before even the band started, and for Drawers, we toured together before the split.

You either have to be friends or at least to share the same conception and visions of music.

Yes, we would like to release a new split before recording a new album. I hope this could be Mongolito from Belgium. We invited him to our release party in September and we’ve talked about a collaboration in the future.

Can you describe Hangman’s Chair’s general conception with one sentence?

Easy — this is not supposed to be positive.

Thanks to Elodie Sawicz for organizing this interview.