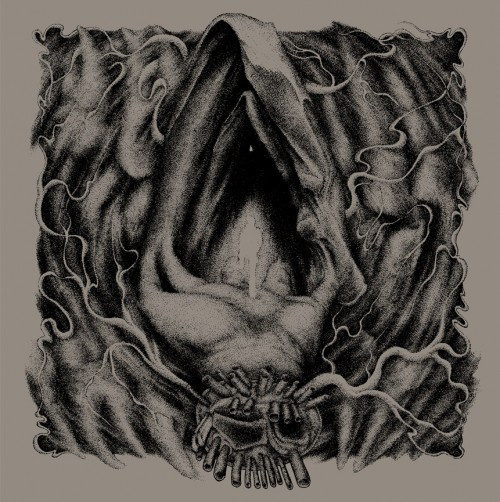 Affliction is the title of the debut EP by a Scottish trio named Caecus. You listen to the music, and it seems born of affliction, and it expresses affliction — among other powerful emotions. It will take you less than 10 minutes to hear the three unnamed songs on the EP from start to finish, but it’s still an all-consuming experience.

If you’re like me, the first thing you’ll want to do at the end, while your head is still spinning, is go back to the beginning and launch it again so you can try to understand better what just happened to you. 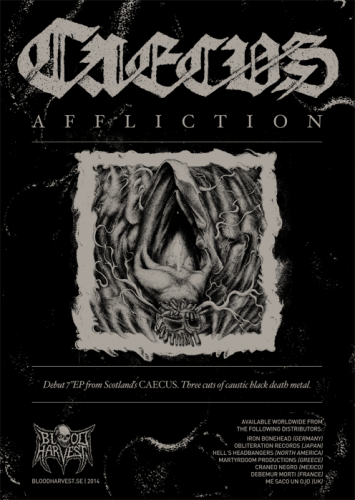 In a nutshell, Affliction is a dense, corrosive, breathtaking maelstrom of death metal violence. The skin-flaying riffs are coated in a thick layer of radioactive distortion and generate ravaging torrents of sound, all the better to simulate the experience of being caught unprepared in the middle of a sandstorm, or a cyclone, or maybe a pyroclastic flow.

But the music isn’t just a howling storm of undifferentiated sound. The songs contain titanic pile-driving grooves, enhanced by the occasional use of stop-start rhythms. And bleak, heaving melodies surface in the midst of these malevolent assaults (along with the attention-grabbing sounds of the bass). Those grim melodies sound like the moaning of some great leviathan dragging its putrefying carcass to the graveyard of its kind.

There’s one other aspect of the music that I suspect will hit most listeners right between the eyes from the very beginning — and continue hitting them until Affliction’s end: The drum attack on the EP is unusual for this style of malignant blackened death metal. It’s the kind of snare-heavy hyper-blasting that’s more commonly found in grind or certain flavors of brutal death metal — and on this EP, the drummer is completely off-the-hook in his speed and precision. It may be unusual, but I think it works really well.

The longest song on this too-short EP is the last one. It backs off the intensity at the beginning, falling into a doom-laced crawl — and then the drummer goes nuts again, fueling the music with a burst of adrenaline while alien chords begin enhancing the atmosphere of otherworldly peril. In the middle of the song, the storming subsides, replaced by an extended groan of abrasive feedback — which leads to perhaps the most explosive eruption of savagery on the EP, and a finale consisting of eerie, void-faring ambient sounds.

In short order, Affliction has become one of my “go to” short releases of the year, especially for those times when I want metal that will blast my head clean of annoyances and worries — and every other thought — and detonate a big bolus of adrenaline in my bloodstream. Vicious stuff, and highly addictive, too. Hope you like it as much as I have.

Affliction features cover art by the masterful Alexander Brown (BNB Illustration & Design) and will be released November 27 on 7″ vinyl by Sweden’s Blood Harvest.