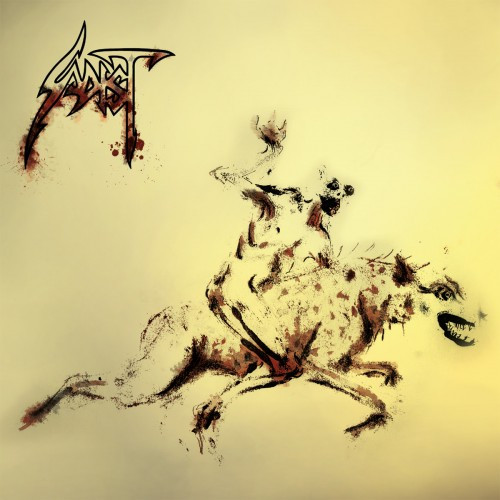 When the word “angular” comes to mind when describing a death metal band, one of the groups that I always have in the back of my head is Italy’s Sadist — a band who since their comeback have been an odd fusion of about a hundred different styles — whose early works were often cited as hidden gems in the death metal community — and a band whose most recent work has been constructed out of some of the mostly oddly shaped riffs, whose music is so alien in its geometry, and whose subject matter is so off the beaten path from what one might consider the usual death metal “fare” that you can’t help but refer to it as “angular”.

It’s been hard to argue about where Sadist lie on the death metal spectrum since their 2007 revival with their self-titled, which featured them returning to form after a hefty, hefty break, since the band have been playing with a keyboard-reliant style, heavy on the theatrics, where the drumming pulls just as much from the jazz and fusion worlds as it does the traditional blast-beat-bombing-run that we’ve all become accustomed to. It’s been difficult to say if Sadist are technical death metal or technically death metal, but if they’re not either then you have to answer the question of what the fuck are they?

Despite being an enigma in genre terms, however, Sadist have — in their most recent three discs — put out some fascinating, odd music. The third of those albums is the group’s mid-October release, Hyaena, an album that has taken its dear, sweet time in following up 2010’s Season In Silence, which itself could best be described as… well… I’m not sure. The cover art featured a pretty prominent evil snowman and had some monstrous tracks in “Broken And Reborn” and “Bloody Cold Winter”, but Hyaena takes us elsewhere. As best as I can figure, it takes us to the wilds of Africa and deals with not only myth but also the behavior of its titular creature. 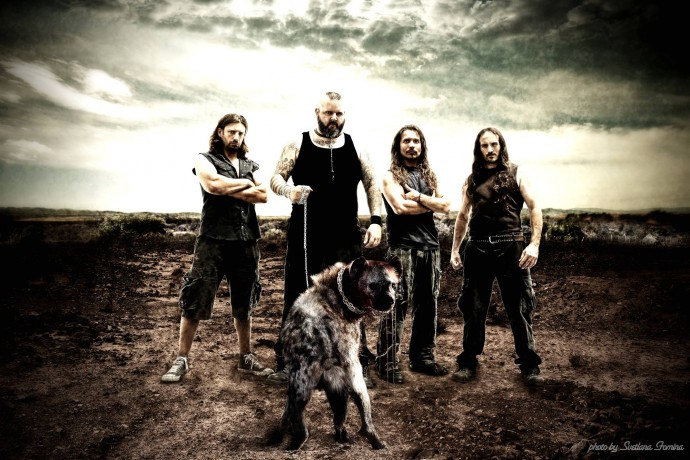 Despite the five-year wait between Season In Silence and Hyaena, initial impressions with Hyaena seem to indicate that Sadist are big fans of the “if it ain’t broke, don’t fix it” approach to music. Forty seconds into a run of the album opener “The Lonely Mountain” and two things immediately come to mind: One, since the band like the “if it ain’t broke “approach, the opening crashes of the song sound a ton like the movements present on Season In Silence. Two, that is a gorgeous-sounding bass guitar, probably one of the most traditionally tech-death things that Sadist have in their arsenal.

Vocalist Trevor Nadir enters the song almost immediately as well, with two re-occurring themes for his vocal style becoming apparent. He spends much of the title track, as well as many moments during the later songs as well, becoming almost as snarling and feral as the creature the album takes its name from, and he also spends many of his vocal lines matching the drum rhythms almost beat for beat.

It’s hard to tell who controls what when it comes to where the songs actually go, because it feels like the members of Sadist are actually in an arms race with each other. Either the drums are seemingly responsible for every guitar riff being the most jagged and angular thing possible or the guitars are written in an intentionally bizarre fashion and the drums have to remain as fluid and manic as possible to keep up. In “Lonely Mountain”, for instance, there are cymbal hits punctuating each jagged guitar stab, and it feels like the song is stuttering forward in its opening movements like a corpse reanimated by electricity.

Even though “The Lonely Mountain” and the following tracks tend to put you in the Sadist comfort zone — or should I say, unease zone (seriously, the keyboard work on the opening of “Bouki” is unnerving) considering that there is nothing about the way these songs move that could be characterized as “comfortable” — with the impression that not much has changed in the years-long gap between Hyaena and Season In Silence, the band still manage to keep a couple of really interesting tricks up their sleeve.

Hyaena is a surprisingly ambitious disc, and given Sadist’s penchant for unconventional subject matter, the slow churning ferocity giving way to a song that has a genuine hook is something of a surprise, and so is the oration delivered halfway through the song. The song I’m referring to? “The Devil Riding The Evil Steed”. The first handful of songs on Hyaena are very much in the vein of Sadist’s previous songwriting methods, but when you hit “The Devil Riding The Evil Steed” you start to see why the band have been referring to Hyaena as one of their most ambitious albums. It is loaded with all sorts of different elements, from a lot of specialized percussion to that narrative delivered halfway through, to an actual melodic line that somehow works its way in between the all of the violent riffing and sees Trevor’s vocals actually followed by something of a chorus composed of synth and backing singers. 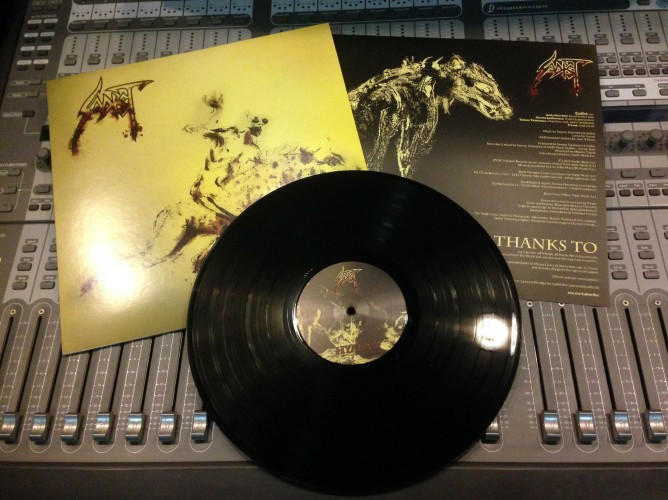 “The Devil Riding” signals a bit of a shift for the next group of songs on Hyaena, as Sadist decide to really throw people for a loop with the following tracks — “Scavenger And Thief” and “Gadawan Kura”.

“Scavenger And Thief” is one of the heavier and more traditional songs on Hyaena, with a pretty straightforward drum assault and a vocal line punctuated by a roar of “SCAVANGEEEEEEEER” that is capable of getting stuck in one’s head for days. It’s a hard shift from the somewhat catchy “Devil Riding” but more in line with the earlier songs on Hyaena, barring the fact that the first three are relentless and jarring assaults and you can actually kind of figure out where “Scavenger And Thief” is going.

“Gadawan Kura”, though, is one of the biggest surprises on Hyaena since the song is largely an instrumental breather set dead center of the album. Hyaena basically flows like a five-song assault, followed by a relatively peaceful instrumental track filled with keyboard swells, before falling right back into the relentless and jutting style that this album is built upon. If you’re a huge fan of the bass playing that seemed to permeate the opening tracks of Hyaena, it comes back in full force during the middle section of “Gadawan Kura” and almost defines the song. In a collection of tracks that could be described as the musical form of barbed wire, a moment of beauty feels almost out of place.

Two of the tracks that punctuate the back half are “African Devourers” and “Genital Mask”. Granted, part of me wants to highlight “Genital Mask” just so I can type the word “Genital” over and over again and go for the record on the number of times the word appears in a single NCS review, but I assume that by now I’ve long lost that record to Phro.

“African Devourers” starts with a rhythm section assault, the drum and bass combo both playing heavily into a tribal theme — in part tied into the African concept of Hyaena — and the extra percussion worms its way into the assault as well. When the rest of the band joins in, the song gets heavier — the guitar seems to grind its way through the song, and there are a couple moments where the song just swoops downward, aiming for a full-on crushing moment before each chorus, where you get the “We are African Devourers” yell.

“Genital Mask”, Hyaena’s closer, comes in at close to six minutes and actually loops around a bit back to some of the movements played with on “The Lonely Mountain”. You’ll notice for instance that the cymbal-heavy drumming returns to punctuate each movement of the guitar. The vocals are delivered just as ravenously as they were in the first song, and the whole track is a percussive affair, marked by the slow onset of rabidity by the band. It even opens with more tribal drumming — which is something that Sadist play with throughout Hyaena. If you were to view Hyaena as something of an essay, then “Genital Mask is the closing summary, putting every element (even a pretty keyboard swell or two) from every other song on Hyaena into play. It even has a genuine guitar solo in it, albeit one that takes a turn for the strange quickly.

Hyaena is the sort of album that comes as a recommendation not because it is an easy listen or because it’s the sort of album that is insanely catchy. Hyaena comes as a recommendation because it is fascinating. In part it’s because Sadist exist in a time-capsule, playing a style of death metal that is highly angular and technical, one from which more modern bands have long since sheered off the edges. It is a style that existed in the time of bands like Atheist and Cynic, and it’s one that Sadist have been playing since their comeback self-titled. Given the out-of-left-field subject matter, Hyaena is interesting from the get-go and the sort of disc you listen to when you want to hear how much someone can contort music and see just how jagged its forms can get.

Like Season In Silence, I imagine Hyaena will probably fly under the radar for a lot of people, and it really shouldn’t. Hyaena makes you want to study it, because for all its odd angles it really shouldn’t work, but it does. Somehow Sadist manage to meld all the pieces together into a flea-infested beast that is equal parts jarring and intriguing to listen to.