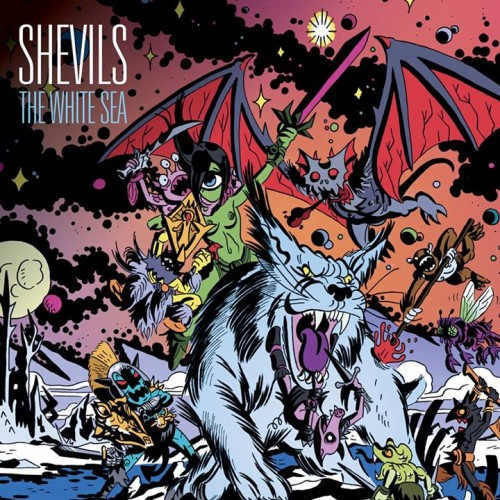 As those of you who follow us regularly probably know, I have a soft spot for Norway’s Shevils, despite the fact that their music is different from the extreme metal onslaughts that have become the (nearly) non-stop soundtrack for my life. And the appeal of the music isn’t something I can describe simply, because the music itself isn’t as simple as it may sometimes seem on the surface. There’s a dichotomy at work, a division among (and sometimes within) the songs, and it has never been more pronounced than in their new album The White Sea.

The album cover (created by Chris Faccone) is populated by fantastical cartoon characters, seemingly at war with themselves somewhere far beyond our solar system. It’s light-hearted and crazy, frenzied and frenetic. And there’s more than a little of that high-energy, off-the-wall sense of aggressive fun in The White Sea. But there’s another side to the album as well, one that shows the band growing and exploring new territories, creating more complex and dissonant sonic landscapes that resonate with a sense of menace and even despair.

If there’s a hallmark to Shevil’s style of hardcore punk and noisy rock, you’ll find it in the music’s high-energy combination of propulsive syncopated rhythms, clanging melodic chords, and throat-rupturing shrieks and yells. They have a penchant for start-stop riffs that make the songs bounce and jab like a fighter, alternating with buzzing lead-guitar melodies that often work to ratchet the tension without ever providing the release. It’s very catchy stuff, with a kind of primal punk simplicity and melodic hooks that get stuck in your head quickly and easily. The first three songs on The White Sea are good examples of that side of the band’s sound.

And then you come to the one-two punch of “The Death of Silence” and “Black Summer”. The first of those two incorporates the band’s usual bouncing beat and big chords, but there’s something almost anthemic about the chorus melody, and the song also includes an instrumental section with an unusual keyboard melody — at least I think those are keyboards (I know there are keyboards on the album, and to my ears it’s a positive addition to the sound, but sometimes it’s tough to separate them from the shining of layered guitars). And “Black Summer” takes a turn into deeper, darker melodic territory, with a more dense sound and with lead vocalist Anders Voldrønning sounding as if he’s venting a lifetime of frustration and agony.

The second half of the album delivers another memorable one-two punch in the tandem of “Fireflies” and “When Will I See You Again?”. “Fireflies” is made of pulsing rhythms and shimmering melody, but with a noticeably dissonant edge and more intricacy than you find in the more stripped-down punk offerings. “When Will Is See You Again?” is a rambunctious, propulsive song that combines rapid-fire jabbing beats and waves of dark, skin-tearing melody. Together, they move the album in an unsettling and interesting direction — but they still don’t quite prepare the listener for the title track, which ends the album.

At five and a half minutes, “The White Sea” is the album’s longest track and certainly its heaviest. All the songs on the album have a certain satisfying heft in the low end, but Shevils make the undercarriage of the track into something groaning and sludgy, and around it a shimmering alien melody flows like a wraith. It’s like the sound of a catastrophic paranoid meltdown. Voldrønning also reaches new heights of extremity in his vocals, with protracted shrieks that sound like a man tearing himself apart with his own hands, caught in a no man’s land between not wanting to live and not wanting to die.

It probably won’t come as a big shock to most of you that although I have very much enjoyed this entire album, I do have my favorites, and they are the songs that are the most unnerving, the most bleak, the most heavy, the most atmospheric — with the title track leading the way and “Black Summer” not far behind it. I’m hoping Shevils continue down that particular thorny path in their future endeavors. But whatever they do next, Shevils have proved on The White Sea that they’re not standing still, and that they’re capable of more than delivering bouts of abrasive, infectious, ass-kicking fun. There’s a darkness on the other side of town, and they seem drawn to it — which for us is all to the good.

The White Sea was released earlier this month and is available for listening on Spotify (here), TIDAL (here), and iTunes (here, at least for Norwegians), and Amazon MP3 (here).

One Response to “SHEVILS: “THE WHITE SEA””