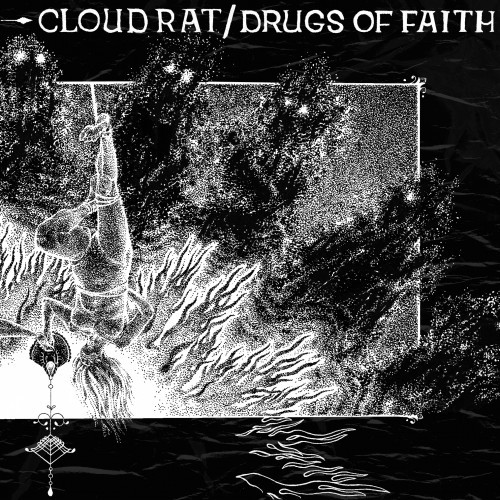 Both of the bands on this split are distinctive, they go their own way, and they’re very, very good. Drugs of Faith are based in Northern Virginia and have been kicking around since circa 2002. Their current line-up consists of vocalist/guitarist Richard Johnson (Agoraphobic Nosebleed, Enemy Soil), bassist Taryn Wilkinson, and drummer Ethan Griffiths. They’ve produced a variety of short releases since their founding, as well as a debut album in 2011 (the phenomenal Corroded). Their most recent releases were the 2013 EP Architectural Failures (here) and a cover of “Paralyzed” by Godflesh for the Fathers Of Our Flesh tribute album (here).

DoF describe their music as “grind ‘n’ roll”. This could be taken as a genre description, but I prefer to think of it as a description of consequences: the music grinds you up and then steamrolls over the remains, to prevent reanimation.

This new split includes two DoF tracks. The one you’ll hear below is “Patriots”. The song’s mid-paced beginning rumbles like a smoke-belching tank before starting to hammer and then rampage while Johnson screams in a red fury. Also, be sure to limber up your neck muscles before you get to the back half of this short blast so you don’t sprain it when the headbanging starts. I hate when that happens. 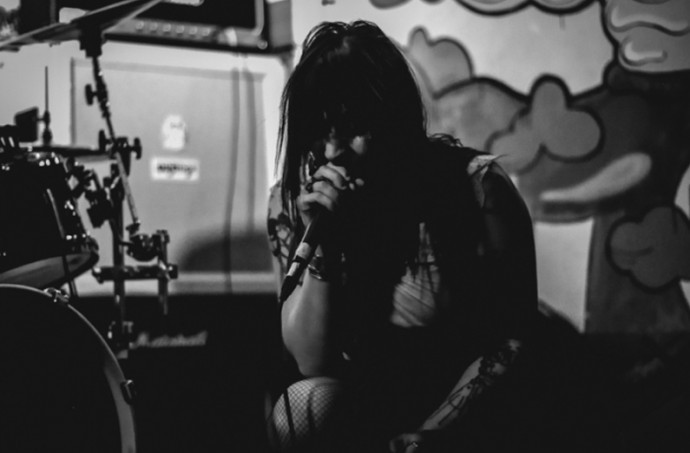 This grind/punk band from Michigan have made a name for themselves in short order, principally on the strength of their last two albums, 2013’s Moksha and this year’s Qliphoth. And I want to quickly admit that calling them a “grind/punk” band, as I just did, doesn’t come close to doing justice to the hybrid of sounds, styles, and tempos they work into their very intense songs.

This new split includes three tracks by Cloud Rat, and the one we have for you is the first of those, “Dull Bulb”. It’s a vicious, bone-fracturing piece of mayhem with the riffs and the bass drum lined up to make sure the punches go straight through the other side of your abdomen. As expected, Madison’s vocals leave nothing behind; it’s a full-bore piece of wrenching ferocity.

Side B – Drugs of Faith
1. Unexpected
2. Patriots

The split is available now from Selfmadegod Records on red vinyl (here) or black vinyl (here). And for those interested in ordering from a U.S.-based distro, click this link.

2 Responses to “AN NCS PREMIERE: DRUGS OF FAITH / CLOUD RAT (SONGS FROM A SPLIT)”