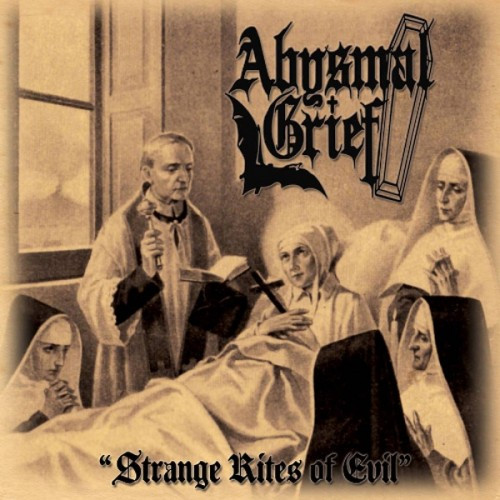 (If all works as planned today, we will have two “Seen and Heard” posts, and in this first one our frequent interviewer from Russia, Comrade Aleks, puts the spotlight on new music from four fine doom bands.)

Four Italian bands presenting four different aspects of Italian doom metal: Abysmal Grief brings the darkest and most sinister doom from decrepit and horrible crypts. Black Oath weaves baleful spells with twisted tunes of occult doom metal. Retro doom metal band Epitaph spreads tunes of evil in their own old school manner. And Night Gaunt reveals the anxiety and terror of our daily horrors with an ascetic and minimalistic doom sound. Accept the will of Mother Death and follow these dark rites, defending your soul only with your inner strength and spiritual tenacity. 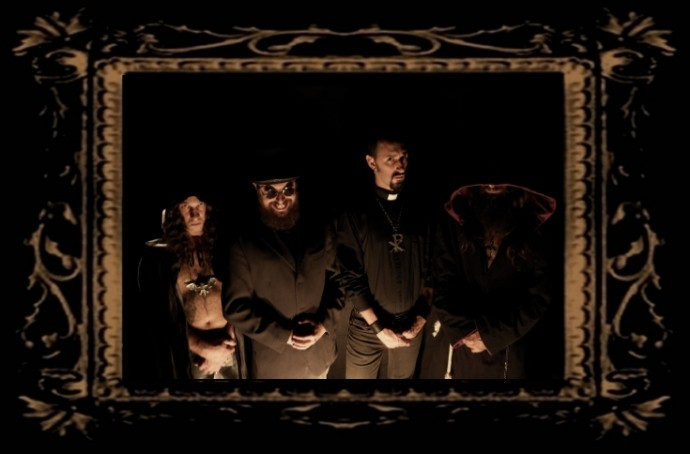 This undertaking has worked since 1996, delivering darkest and baleful doom metal without stopping to hold a breath. The heart of the band is three talented musicians whose names are Regen Graves (guitars, drums), Labes C. Necrothytus (vocals, keyboards) and Lord Alastair (bass). The official post of Abysmal Grief’s drummer is cursed, so drummers don’t hesitate for long here.

For about twenty years of labor the ominous trio has recorded four big records starting with the classical work Abysmal Grief in 2007 and continuing with its successful sequels Misfortune (2009), Feretri (2013), and Strange Rites of Evil (2015). They are talented and they have their original style, and you make sure of that just by taking a look at the Abysmal Grief albums covers.

Slow, tough, ceremonial riffs, mysterious organ keyboards, sullen, triumphant vocal lines and poetic lyrics describing the difficulties of communication between live ones and those who are dead. Regen Graves explains his attraction to question of death:

“The image of Death is a part of my daily life, honestly speaking. I really cannot imagine some form of Art coming out from me without any reference with it. And yes, probably we became a little more aggressive growing older… I think this is quite natural when you spend your life in a world and society which spit their failures and contradictions in your face every fucking day”.

Another popular image we meet in Abysmal Grief songs is “misfortune”. Regen continues:

“You can consider ‘misfortune’ as Bad Luck, but also ‘fear of Death’. Italy (and all the countries of the Mediterranean area) has a very superstitious culture and traditions, mostly caused by the catholic fear of punishment and other shit promulgated by the terrible Christian church, so we decided to use this topic to attack and mock in a more subtle way all the assholes who follow like sheep the catholic hypocrisy”.

So this band has moved through the years with dignity, remaining true to their conception and growing in their professional mastership. They are welcomed on gigs and big festivals not only in Italy but also abroad. The latest full-length record Strange Rites of Evil demonstrates that Abysmal Grief have enough passion, dedication, and ideas even after 20 of bringing purest and darkest doom. They use their formula with deadly effectiveness, as they have done it for long years in Mother Death’s service with perfect mature riffs, and with support of eerie keys and maximum sinister vocals. You’ll be buried even if you don’t want that. Abysmal Grief plays the triumphant march of death, we follow the tune. 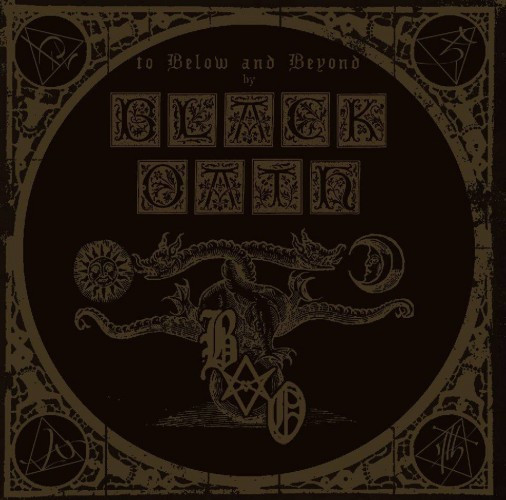 Black Oath was sealed in the catacombs of Milan in 2006 by three shrouded figures whose full names are unknown. After five years of occult practices and rehearsals, and after three symbolic smaller records, Black Oath finally recorded their first full-length album. The Third Aeon was created in a collaboration of the coven chief A.th (vocals, guitars), C.Z. (drums), and P.V. (bass) on I Hate Records. The second album Ov Qlipoth And Darkness was recorded with same lineup and released by the same label, and overall it contains the same sonorous epic doom metal with the band’s developing features.

Black Oath’s image was always darkness at its maximum, even sinister, as their lyrics deal with powers of evil and the dark lord itself, yet there’s something noble, emotional, and tragic in band’s sound… This second work looks stronger, and the compositions are more varied with tempo changes and cleaner guitars solos. As the songs’ texts are connected with such common topics as witches, dark rituals, and evil in general, I feel that we need a comment from A.th:

“Since the very beginning, the band has been part of a big concept. We signed the black oath on our first EP Black Oath (it starts with a black initiation), we lived The Third Aeon (due to personal reasons and the first line-up change), and we drowned into darkness through qliphotic energies on second full-length Ov Qlipoth And Darkness.

“This time, I was reading books about alchemy and they gave me the idea of a concept album. All bands are “occultists”, “magicians”, and are reaching the “one” nowadays. So we made an inversion and found pleasure in lust and sins cursing ourselves to the world below! The single “Wicked Queen” is part of our third concept album about an alchemic and his deep research, which is needed to reach the highest levels of spirituality. I made a sort of story with it as  thefinal result — the fall of men”. 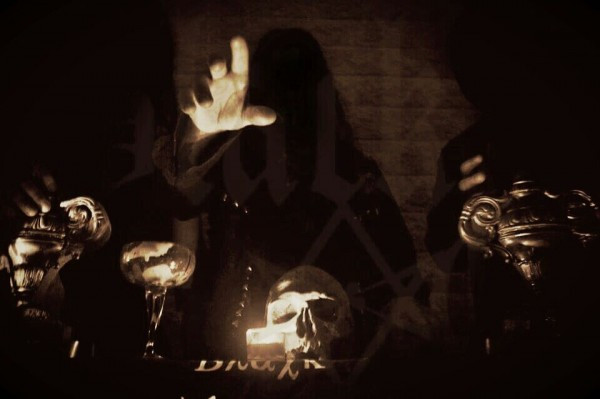 So “Wicked Queen” is a single that paves a road for Black Oath’s third album To Below And Beyond, which was tested on live human beings during Hammer of Doom and few more big festivals. I should admit that Black Oath performs the attractiveness of ruinous powers perfectly, and To Below And Beyond is the most potent work of the band at the moment. 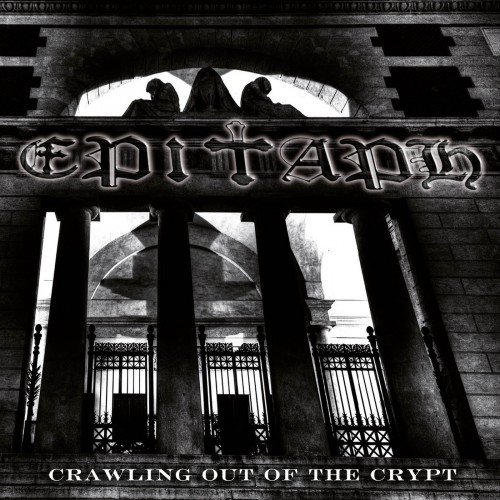 The very first line-up of Epitaph (Verona, Veneto) was composed of Mauro Tollini (drums) and Nicola Murari (bass), straight out of their experience in the Black Hole / Sacrilege bands back in 1987. Giampy Tomezzoli, who was a singing bass guitarist, and Andrea Picchi (guitars) left the band after first demo The Lord of Evil (1988), and other demo records Sacred and Profane (1992) and Mental Walls (1994) were recorded with Mauro, Nicola, and new musicians.

After nearly 20 years of silence two core members made the decision to revive Epitaph with new guitarist Lorenzo Loatelli and a singer Emiliano Cioffi, who previously was a member of epic band All Souls’ Day from the same city. Such a sudden return gave a birth to first official Epitaph release Crawling Out Of The Crypt on High Roller Records in 2014. The album includes a few songs taken from old demos and a few new tracks, and its songs (both old and new) musically keep the spirit of the ’80s, and moreover the CD’s inlay has individual, pretty old-school-styled illustrations for each track. Emiliano is the author of these pictures:

“I’m the one responsible for those ultra-naive illustrations, as part of the process of reconstructing the lyrics from the original recordings, that were all but lost, or even never actually existed: many lines were sung as freeform phonetics, such as in Paul Chain’s tradition. The illustrations came first, then I derived the current lyrics from them. I’m doing the same for every future recording by Epitaph“.

Mauro and Nicola didn’t lose their skills even though they have had a long break, so with the help of two fresh members they created a solid and intriguing work. Their vision of doom metal is filled with influences from progressive and heavy metal, and the combination sounds natural and appropriate. Even if Epitaph play classic tritone tunes as in the album’s opener “The Battle Of Inside”, they always leave space for decorative and graceful guitars or keyboard, though keyboards play mostly an auxiliary role in Crawling Out Of The Crypt. 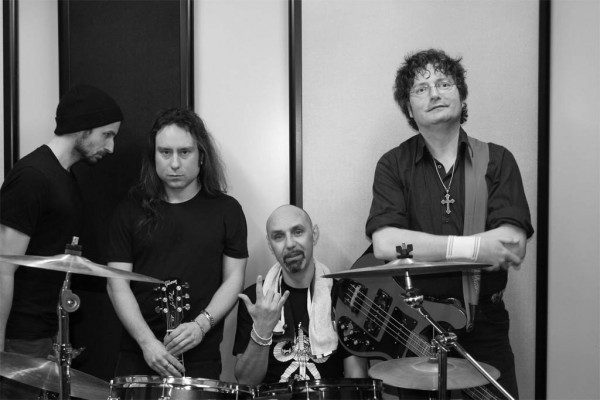 Such songs as “Sacred and Profane” taken from the demo of 1992 have a really old school feeling, and it’s maintained even in the sick and quite insane atmosphere of “Necronomicon”, while “Loser One” has a few hooks and shows an example of a highly afflated solo, so the album is far from monotonous and each track has individuality.

An epitaph is a text to honor a deceased person, but Epitaph from Verona are alive and kicking, though their name indicates the band’s addiction to poetic, dark, and sometimes sorrowful music. 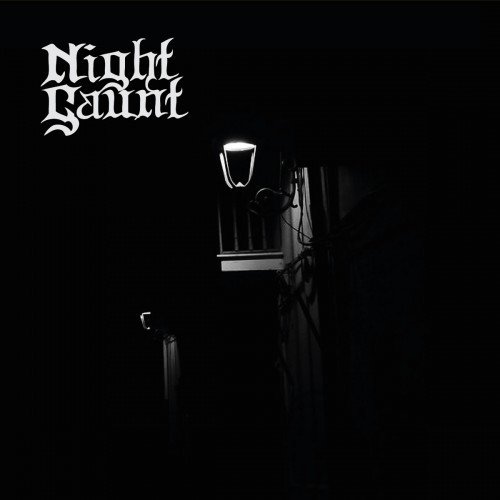 Nightgaunts – nightmarish flying creatures imagined by Lovecraft’s genius and described in the novella The Dream-Quest of Unknown Kadath. Also, Night Gaunt is a murky band from the Eternal City of Rome that keeps alive the traditions of true doom metal. Night Gaunt existed as Hypnos ’til 2013, and released through Blood Rock Records a debut self-titled album a year after changing the band’s name. Gc (guitars, vocals) says:

“The main idea was to create something that could give to the listener a general sense of oppression, discomfort and anxiety. All the tracks were conceived in a period in which these feelings were omnipresent, so I thought it was right to regurgitate all this negativity into music. It’s simply about a betrayal and all its destructive consequences (rage, self-destruction, sleepless paranoid nights etc)”.

This quartet made the decision to play sinister, anxious, and dark music, and they really get there. Guitars performed by Gc and Zenn sound harsh and heavy, the clean vocals are disturbing, and the songs’ tempo — driven by the will of Araas (bass) and Kelevra (drums) — changes from slow to fast-paced, adding some agility in Night Gaunt’s horror stories. The songs bear brief and simple names like “Persecution”, “The Church”, “The Patient”, and hold an atmosphere of horror in simple things as it is in the abstract labyrinths of Kafka stories. 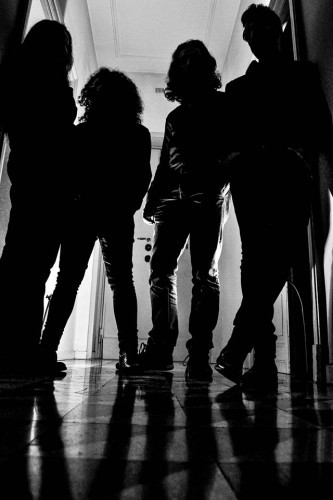 “Rather than Rome, personally I think that my birthplace, as well as things like southern education, traditions, superstitions, and habits, were a very huge influence. For example, ‘Persecution’ is something pretty similar to an evil-eye, a ritual that is still alive down there/here, and ‘The Church’ is just a big metaphor for San Severo and the living in it”.