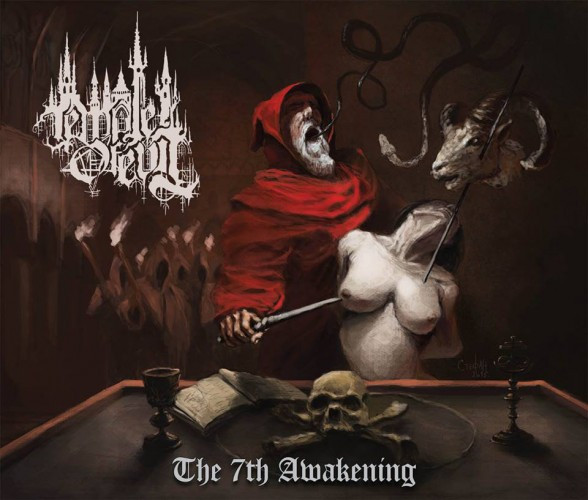 Today it’s our pleasure to help premiere the debut album by the black metal band Temple of Evil from Nicosia, Cyprus. Entitled The 7th Awakening, it will be released in a 6-panel digipak of 500 copies on January 7, 2016, by Deathhammer Records, and it’s available now on Bandcamp as well. And as you can see, it is accompanied by the striking artwork of Khaos Diktator Design — not only for the album cover but also for individual songs.

Temple of Evil’s unholy ranks consist of an agile bassist who doubles as a blood-freezing vocalist, a pair of riveting six-string guitarists (one of whom doubles as the keyboardist), and a drummer who is both acrobatic and a lethal blaster. Together they have created a dark and dramatic full-length, one that is esoteric and unearthly in its aura, both solemn and savage, grim and gripping.

With one notable exception, the music on The 7th Awakening lives in the shadows, sometimes melancholy or brooding in its mood, sometimes ominous and perilous. But that’s not to say that the songs are either monotonous or predictable — far from it. However, although the music is intricate and dynamic, it is cloaked in a shroud of Stygian darkness from beginning until very nearly the end.

There is a ritualistic quality to nearly every song. When the band are proceeding at the pace of the processional at a black mass, the music generates a mystic aura and an eerie sense that doors are being opened to unseen powers. The vibrating guitars are intricate, dissonant, and moving, and the solemn, otherworldly aura of the songs is enhanced by the sounds of choral voices and ambient keyboards.

But in almost every song, Temple of Evil also explode, as if a napalm canister has been detonated in a dense forest. The guitars slash and writhe, the drummer hurtles along in a fury, the vocals become inflamed to the point of madness — and yet the darkness of the music never breaks, nor does the grip of the melodies. 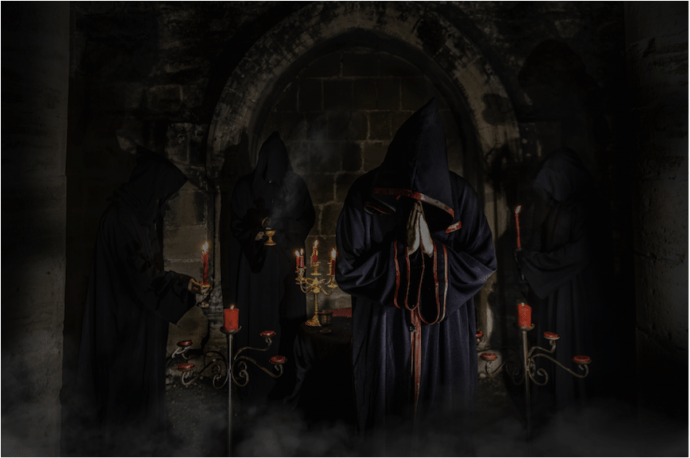 And speaking of melodies, the more I’ve listened to the album, the more I’ve come to eagerly anticipate the moments in all the songs when the heavy overhang is pierced by high, trilling guitars (often paired with thrumming bass notes or somersaulting drum fills), because as sorrowful as those melodies are, they’re also sublime. The two longest songs on the album — “”Chalice of Impure Blood” and “The 7th Awakening” — are excellent in many respects, but each of them closes with extended guitar solos that are especially beautiful and that drive the passion in the music to crescendos. They’re among the album’s high points.

And speaking of passion, the reverberating vocals on the album are embodiments of savage rage, whether the vocalist is engaged in tyrannical proclamations or spitting bile at high speed. There are chanted words and a few clean vocal passages as well, but in the main the voice you hear is inflamed to the point of bubbling the paint on your walls.

The clouds part only at the end of the album, in a closing instrumental (shorn of the drums) that’s dreamlike and ethereal. It’s a shimmer of beauty at the end of a journey through infernal depths.

This album is a great listen straight through, and that’s the best way to hear it, as bleak and heavy as it is (the clear production allows you to appreciate the talents of everyone in the band as well as the intricacy of the richly layered music). But if you want to just test the waters with something shorter than those two outstanding long tracks, I’d suggest “The Book of Shadows”.

For information about how to obtain the album, check the links below.

5 Responses to “AN NCS ALBUM PREMIERE (AND A REVIEW): TEMPLE OF EVIL — “THE 7TH AWAKENING””