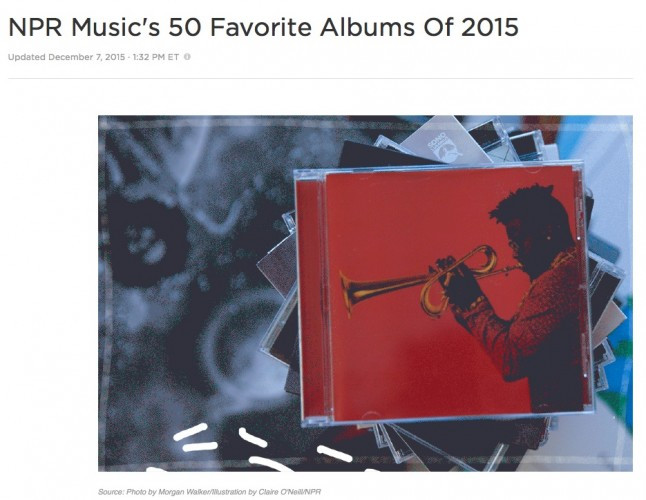 I’ll repeat what I’ve written in years past, because it remains true: NPR (formerly National Public Radio) is an American national treasure, one that has somehow survived as a non-profit national radio and on-line broadcaster (with 900 public radio station members) despite largely weaning itself from governmental support and being the target of repeated political attacks by the American right wing. According to Alexa, its online site is the 148th most popular of all U.S.-based web sites and the 568th most popular in the world.

Today NPR Music posted a list of its 50 favorite albums of 2015. It’s a cross-genre list, reflecting the broad demographic of NPR Music listeners. I’ve siphoned off the metal albums from the overall list and am presenting them after the jump.

In years past, NPR has also separately posted a list prepared by writer Lars Gotrich of the best metal albums. I’ve always looked forward to that list, but I understand (sadly) that it won’t be happening this year. So, we must make do with this:

Here’s the list of metal names that appear in the big cross-genre list of 50. NPR didn’t rank those 50 albums, only listing them in alphabetical order, so I’m doing the same. You can see the full list here:

Dead To A Dying World – Litany

Okay, I was joking. There are not metal albums on the list, just the one. It’s a really good album, mind you, but… well… I guess this did save me the work of having to figure out alphabetical order.

If you happened to read our earlier posts today about cross-genre lists from other large sites, you will be noticing a pattern in their attention to metal. There are other patterns as well:

Though I listen to almost no music any more other than metal (NCS is a harsh mistress), I have noticed quite a few not-metal names that are appearing everywhere. The only one of those I’ve actually listened to is the latest album by Jason Isbell named Something More Than Free, because I already knew he was an amazing lyricist and songwriter and because I still have a soft spot for country music from my youth. I guess there might be some other good non-metal albums out there that I don’t know about.