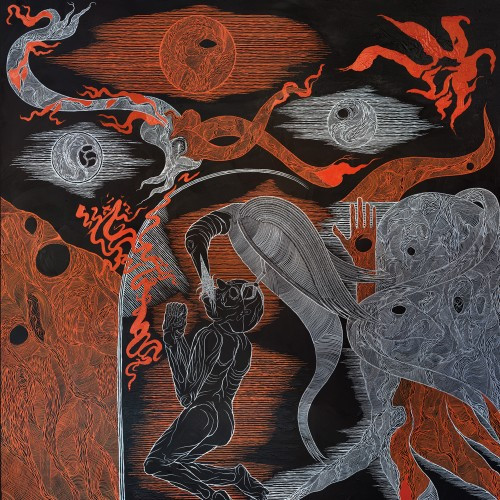 In February of next year, I, Voidhanger Records will be releasing the third album (and the first on this label) by the one-man German black metal project known as Voidcraeft. Its title is Ἕβελ and it’s unusual in many respects, not the least of which is that all of the lyrics are in either Biblical Hebrew or Koine Greek. There’s a reason for that, which we’ll come to in a moment, but here’s the main point of this post: We’re giving you the chance to listen to two songs from the album, the English translations of which are “I Am Nothing” and “Under the Sun“.

For people who follow our site (religiously), Voidcraeft will not be a new name. Our man Andy Synn featured the band in a post here in October, recommending the music to fans of Deathspell Omega, Ævangelist, and Portal, while noting the experimental nature of the music and its creator’s tradition of writing his own self-critical analysis of his prodigious output. 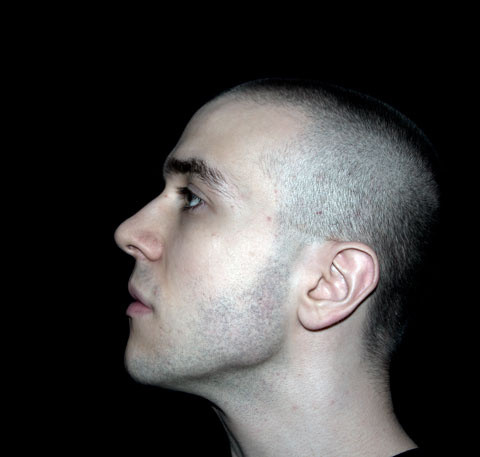 This new album was largely inspired by Voidcraeft’s reading of all of the New Testament and the Hebrew Bible. “The ordeal lasted for seven months,” the band’s sole member recalls.

“Since I have a keen interest in foreign languages, I did not only read the English translations but also the Greek, Hebrew and Aramaic sources every now and then. I was constantly making notes, which I later reassembled and slightly modified to write the lyrics for this release.

“I was particularly impressed by Job and Ecclesiastes, early examples of Jewish existentialism. According to their bleak theology, Humanity is portrayed as the subject of a cryptic God who rewards the wicked and punishes the faithful. The laws he gave to man are ultimately meaningless because he does not care whether we choose to obey or ignore them. Born into an equally meaningless world, we are stuck in an endless cycle of birth, suffering and death, pursuing vain things such as wealth and social status, all of which are but a breath; that is, temporary and ultimately worthless.”

We’re also told that this figurative usage of the Hebrew term for breath or vapour, which is hevel or havel, also inspired the album title:

Ἕβελ is an Ancient Greek transliteration of the aforementioned hevel, and it references both the Hebrew and Greek album segments, which represent the Hebrew Bible and the New Testament, respectively.

As explained, we have two songs for you to consider. The first of these is “חַת הַשָׁמֶשׁ (Under The Sun)“. The lyrics of this one are in Biblical Hebrew, and we have provided the original lyrics as well as the English translation below the music player. The second song is “Οὐθέν εἰμι (I Am Nothing)“. The lyrics to this one are in Koine Greek, and we’re also providing those as well as the English translation beneath the media player.

Now obviously, you can make up your own minds about the music. In fact, most of you are probably already listening by now. But in case you’re still reading, I’ll tell you that you’re in for a thrilling and head-twisting experience. “Under the Sun” is a mix of savage lightning storms and disorienting meditativeness, an intricate musical kaleidoscope of dissonant riffs, abrasive vocals, and unsettling atmosphere.

“I Am Nothing” is generally slower-paced though perhaps even more complex and contorted, though it interweaves traceries of beguiling melody through the labyrinth of discordant notes and unpredictable percussion.

Consistent with the creator’s conceptual approach, both songs capture the bleakness, the fearfulness, the chaos, and the despair that can often visit human life, in which rewards and punishments are meted out in seemingly random fashion during the gasping breaths of a transitory existence.

The wonderful cover art for Ἕβελ was painted by Norwegian artist Sindre Foss Skancke (website here), and this is the album’s track list:

Ἕβελ will be released by I, Voidhanger on February 5, 2016. For more information, visit these locations:

“תַּחַת הַשָׁמֶשׁ (Under The Sun)”

וְהִנֵּה הַכֹּל הֶבֶל
וּרְעוּת רוּחַ
וְאֵין כָּל־חָדָשׁ
תַּחַת הַשָׁמֶשׁ
And behold, all is vanity and a chasing after wind
There is nothing new under the sun

מַה־שֶׁהָיָה
כְּבָר הוּא
וַאֲשֶׁר לִהְיֹות
כְּבָר הָיָה
אֲנִי־הִיא
אֲנִי־הוּא
אֲנִי רִאשֹׁון
אַף אֲנִי אַחֲרֹון
That which is, already has been; that which is to be, already is
I am she, I am he, I am the first and I am the last

“Οὐθέν εἰμι (I Am Nothing)”

Πρηνὴς γενόμενος
Ἐλάκησα μέσος
Καὶ ἐξεχύθην
Πάντα τὰ σπλάγχνα
Ἐκχεῶ
Ἀπὸ τοῦ πνεύματος μου
Ἐπὶ πᾶσαν σάρκα
Ἐπὶ τὸν κόσμον
Having fallen headlong, I burst asunder in the midst and all my intestines gushed forth
I will pour out my spirit on all flesh, on the world

One Response to “AN NCS PREMIERE: VOIDCRAEFT — “UNDER THE SUN” AND “I AM NOTHING””