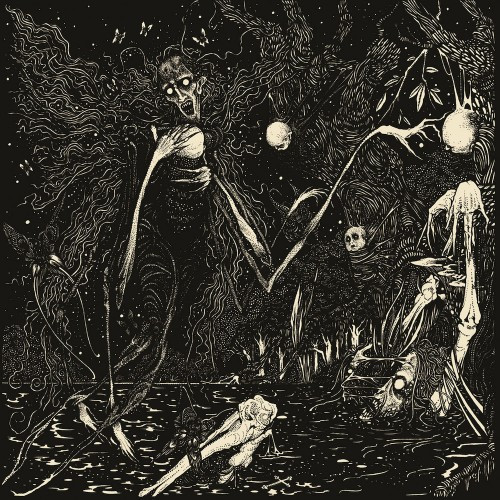 Gaze upon the frightening album art above (created by the talented Karmazid), and imagine the Great Grey Witch lurking in the ooze of an ancient festering swamp, watching and waiting in the Stygian blackness for the time of her revenge. It accompanies the new album by Ohio’s The Wakedead Gathering, an album that presents an allegory about those who would dismiss scientific inquiry in favor of religious fanaticism — “the story of of a witch hunt that turns hunter into prey and the children of those so-called ‘righteous’ perpetrators into something… not entirely human!”

The name of the new album is Fuscus: Strings of the Black Lyre, and it has been scheduled for release on February 5, 2016, by the always fascinating I, Voidhanger Records. The music on the record — which follows the band’s two previous full-lengths, Tenements of Ephemera (2010) and The Gate and the Key (2013) — displays a variety of terrifying sounds as it follows the narrative concept, and today we give you a sample of what lies in wait with our premiere of the fifth track, “Lungwort“.

The Wakedead Gathering is a solo project, and in “Lungwort” the band’s single member (Andrew Lampe) has created an atmospherically morbid piece of music, both dismal and dire, murky and nightmarishly ravaging. The song includes an array of vocal ferocity that ranges from blackened shrieks to cavernous roars, as well as dynamic tempo variations, a rumbling low end, and fascinating changes in riffs and lead-guitar machinations. It’s a musical nest of vipers and specters stirred into a blood-lusting fury, combined with dirge-like passages that conjure images of a malignant power lying in wait within the shadows.

Below you will find the new album’s track list and links for further info about the band and Fuscus…, followed by the horror of “Lungwort“.

4 Responses to “AN NCS PREMIERE: THE WAKEDEAD GATHERING — “LUNGWORT””