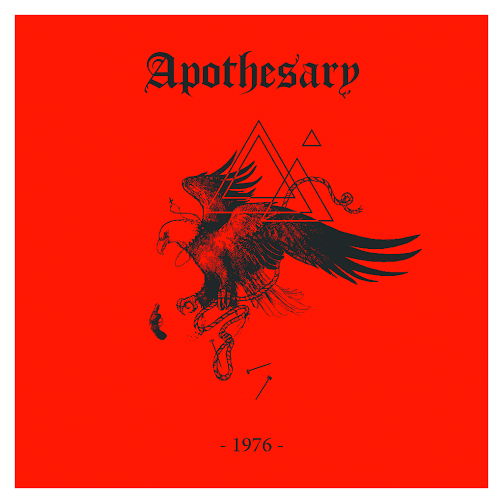 Lots of people seem to be celebrating some kind of event today where you prove how much you love your friends and family by spending money you don’t have giving them things they didn’t ask for and probably won’t like. We’re trying to learn more about this event, but in the meantime, we have a gift of our own for you to unwrap. Actually, it’s not our gift to you, it’s a gift from San Francisco’s Apothesary. We know what the gift is, and not to spoil the surprise, but we’re pretty sure you’re going to like it.

It’s a gift of music, a song named “1976“. This isn’t the first time Apothesary have done this. Three years ago on this day they released an EP entitled They All Carry Ghosts. We wrote about that one, too (here). This gift is intended to tide people over until the band can bring more good tidings your way in the form of an album that’s in the works. Here’s more detail about this gift via the band’s lead guitarist Clayton Cagle:

“It’s been far too long since we’ve been able to release new music. The short story is that there are a few labels waiting to hear a finished album and we’ve had too many delays (with a healthy dose of procrastination) to finally make it happen – and we’re tired of it! So we had the idea to do something special; to just go ahead and let you all in on what we’ve been up to. And what better way than to do it than on the eve of TACG’s anniversary – the EP that essentially put us in the awesome (albeit currently awkward) situation where we are.

“We aren’t a political band, by any stretch, but ‘1976’ is a reflection on a weird time period in American history. A year that featured intense occurrences: from the first ‘Son of Sam’ murder to the first trade deficit that the US had ever seen – all in our 200th year of life. To me, 1976 was the year where the transition from ‘classic’ America to ‘modern’ America became apparent.

“I hope you enjoy this taste of our new album, and I promise it will see the light of day in 2016. See you soon!”

And with that, we present the song — which is a thundering blast of death/thrash that will get your blood racing, complete with an infectious melody, rabid vocal tirades, and a combo of acoustic and electric guitar shred hot enough to singe your eyebrows.

If you enjoy this new single as much as we think you will, you can download it for free by going here: