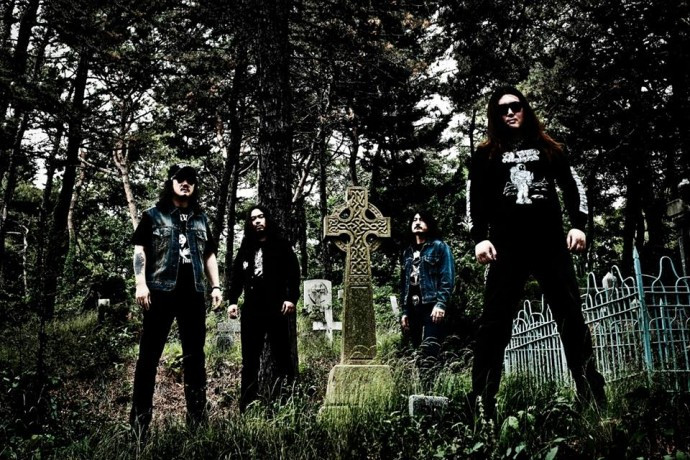 (Comrade Aleks rejoins us with this interview of the vocalist and guitarist of Black Medicine.)

You maybe asked yourself: Where has Comrade Aleks been? Where has he been since New Year’s coming? Was he lost, drunk, and miserable on Red Square in Moscow? Did he freeze to death in snow-covered Saint-Petersburg? There’s no reason for worries dear comrades! I was searching something new for you, something besides new Italian doom metal bands… And you know… I’ve found it.

Welcome Black Medicine! A damned heavy and sludgy doom band from South Korea! They done their dirty deeds since 2005, but their first full-length album Irreversible was released less than a year ago. What’s the hell?!! How did it happen?!! Let’s ask it Lee Myeong-Hee (guitars) and Kim Chang-Yu (vocals).

Hello comrades! What’s the story of Black Medicine? I see that it was formed in 2005 and your first and only album Irreversible was released only in 2015. What did you do all this time?

Lee: We’ve been playing in lots of clubs and live halls constantly before the album released at 2015. Black Medicine was formed in 2005, and 2 years later in 2007 we recorded our EP album, but suddenly, the drummer dropped out of the band. So we stopped the album stuffs. And then we changed the drummer, and played live shows steadily. And the label Stoneage requested a contract with us. So we started our album recording in 2014. And so the Irreversible album was released only at 2015.7.22.

How did you get on the Mirrorball Music label? How do you collaborate with them and distribute your CDs? 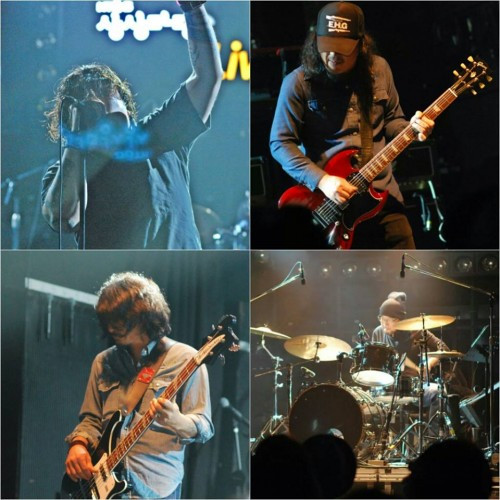 What kind of meaning did you put in band’s name? What’s Black Medicine’s conception?

Lee: For us “Black Medicine” in itself has various meaning. People who suffered or died by medical accident unfairly. And social misfits, alcoholics, drug addicts, and so on.We wanted to tell about those dark sides of society. So we choose “Black Medicine” for our band name.

Why did you choose these topics for the songs? Are they so familiar to you?

Chang: Actually, I’ve been alcohol addicted, that made me estranged and marooned in the middle of nowhere for a long time and gave me some tough times. 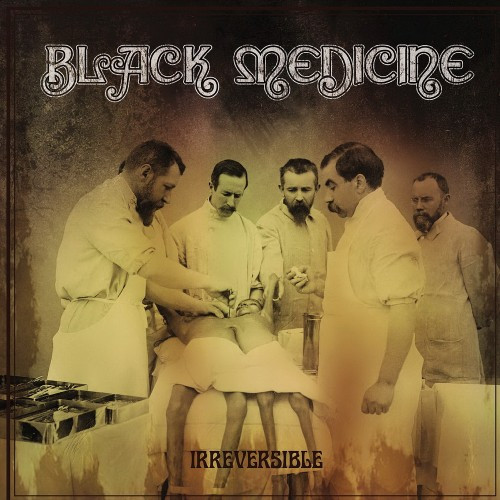 Where did you get this ominous photo for the album’s artwork? What is it?

Chang: I took it from an image bank and art work means — Siamese twins’ surgical operation. Once operated upon, they never go back, so, doctors are irrelievable. Their hesitation resembled our whole life.

Your first album is very well-produced, so I wonder where did you record it and in what kind of conditions did you work over it?

Lee: Our whole recording works were done at our label Stoneage’s studio, even the mixing works. But only the final mastering work was finished at New York’s Sterling Studio.

We wanted to make our sound like a mixture of 1960~’70s old vintage rock and a modern sound, 50:50. Therefore, we tried many experiments and brought some problems too. Almost all the equipment in the studio were digital ones. But we wanted to express an old vintage sound, so we had some difficulties during recording. But, for sure, the equipments of Stoneage studio are really great.

Your songwriting is also pretty strong, as if you worked over these songs for some time… Can you tell us, how did the process of the songs’ composing go?

Lee: When we start song-writing works, we concern ourselves about the song concept itself firstly. And discuss tempo, sound. Then make guitar riffs for song-writing. Sometimes, we make lyrics first and then make a proper song for the lyrics. We don’t write many songs at once. We write songs when we hit upon good ideas and we are used to taking much time for song-writing.

How long did you record the album?

Chang: It took around 2 years. We did pay more attention to our lyrics, the arrangement, and heavy sound. At that moment we had a hard time because one member dropped out, but we got over it — finally WE made IT!!

Do you have any local influences in Black Medicine’s music or lyrics?

Lee: Actually, we are not much influenced by domestic bands. But we, dare I say, we like some old domestic bands. Shin Jung Hyun & Yup Juns (신중현과 엽전들), Sanullim (산울림), Deulgukhwa (들국화) are our representative favorites.

Black Medicine is influenced by many overseas old bands. Like Black Sabbath, Jimi Hendrix, Led Zeppelin, Deep Purple, Cream, The Doors, The Allman Brothers, and so on. 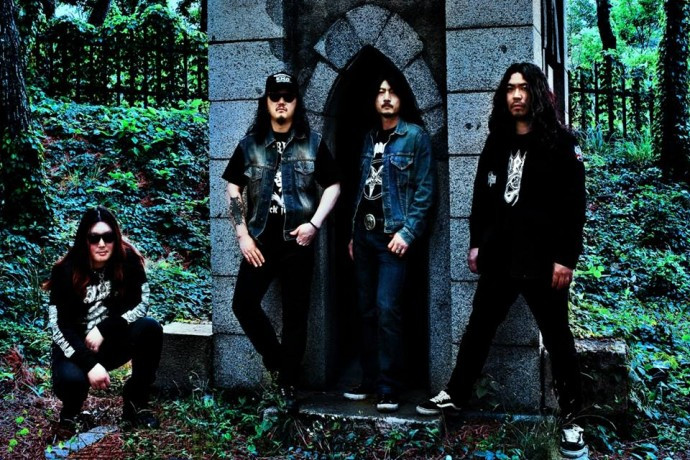 I’m rather meaning to ask about your surroundings – how does your environment reflect in your music?

Chang: Our hometown is In-Cheon. It taught me how to live a tough life and how to struggle against your enemies and how to keep on with a Rock and Roll Heavy Industrial factory sound, make for my ears HEAVY MUSIC!!!

By the way, don’t you want to make a song with lyrics written in your language?

Lee: Sure, we have Korean lyrics in our songs. Just the proportions of English lyrics are more. We will write songs with Korean and English lyrics properly. Of course, it’s up to situations.

There are some speech samples in the “Road Swamp” song. Were did you get these samples?

Lee: “Road Swamp” is the only song written with Korean lyrics in the album. The song tells about a drug addict who was cast out from society. And the sample is from a 1950s drug public advertisement and documentary.

You know it like nobody else — Black Medicine is the only doom band in South Korea. How do you live with that?

Lee: Yes, in Korea the doom genre has not that long a history. And we are the only band who pursues Doom-Stoner-Sludge metal since 2005. These days, there are some younger bands who are trying to play in that style. So we play with them together now. 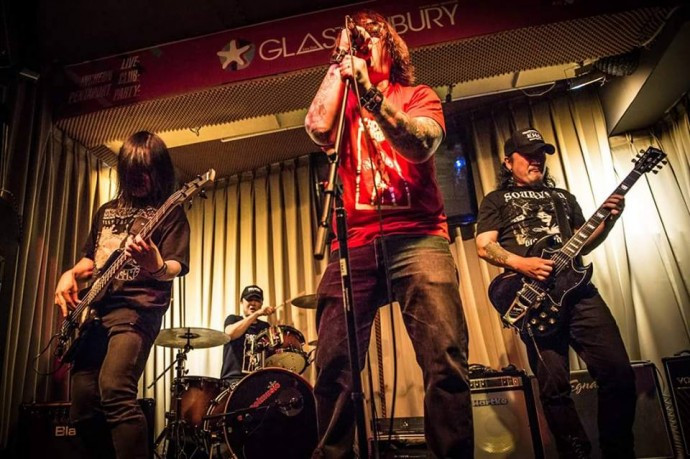 Do you get recognition in your country?

Lee: If we need to say for ourselves… our public recognition has reached a considerable state to a degree. You know, Black Medicine is the only band who plays that music for so long here. So it’s meaningful. And the Korean Metal scene is not as big as the ones in Europe or the US.

How often do you play gigs in Korea? And have you ever played abroad?

Chang: We usually play 3 or 4 times in a month, and  the summertime is very busy because official gigs are already scheduled. We’ve gigged in Club Huck Finn Nagoya in Japan since 2014, and we have a good relationship with Nagoya extreme music bands and Noothgrush from Oakland, U.S.A. We got gigged together and it was fucking crazy!!

What are your plans considering the next release? Do you already have new songs in the works?

Chang: Recently, we’ve just released our debut album, so we’re going to play gigs more often — that helps make us even happier with our crazy fans!! Many concerts will teach me how to set up the second album!

Thank you for the interview mates! I wish you and Black Medicine all the best on your road to the world doom scene. Good luck!

Chang: Thanks for this interview, it was special for us! We heard that there is good doom in Mother Russia, and it is very popular and easy-going among the Russina headbangers at Saint-Petersburg,and Moscow. We hope to see Russian and American headbangers someday. Please just give us an invitation and we will get there!!