(Wil Cifer reviews the Atlanta stop of the “Chaos Raids Tour”, featuring performances by 1349 and Tombs.)

Cvlt Nation’s “Chaos Raids” tour is the darkest metal line-up on the road so far this year. Featuring two bands I have wanted to see for some time, Tombs and 1349, served as enough of a motivating factor to force me out of the house, since this fell on the day David Bowie died. It served as catharsis, as all good metal shows should.

We got to the Basement in the hipster-infested East Atlanta Village a little late, so we missed the local opener, blackened death metallers Vimur, and Full of Hell, who I had already seen with Mutilation Rites. 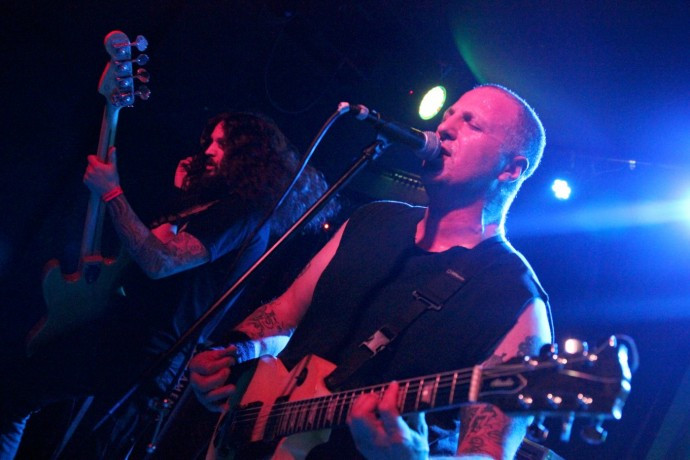 Minutes after entering the venue, Tombs went on. To my surprise there had been some line-up changes, though bassist Ben Brand from Woe was still in the band. The big surprise was the addition of Fade Kainer from Battilus/ Staiqbloom.

He split vocal duties with Hill and had his own personality in terms of stage presence. He still honored the more black metal elements of the band, but also brought out the more industrial influence that has been simmering under their surface. The band’s more post-punk moments were toned down, since being on tour with a band like 1349 means they have to bring it every night in the most furious fashion possible. The additions to the band added a lot to their sound. Fade’s synth work added punch to the low end as he accented certain hits.

First off, before we get into 1349’s set, lets be clear that it doesn’t matter what you think of black metal’s more theatrical elements, these guys are the real deal and they played with dead-serious conviction.

The stage was set for the ritualistic pageantry of black metal. The drummer first came out in a hoodie and full corpse paint on to adjust his drums before returning to the stage covered in sigils scrawled over his bare torso. Frost was not able to make it over, so they employed Jon Rice of Job For A Cowboy, and I can’t imagine Frost being better than this guy, who didn’t even break a sweat. For a little guy he hammered everything out with power and machine-like precision.

Their singer Ravn commanded the stage by waving about his Gwar-like gauntlets. Every growl was forced out with passionate anger — though for their set the mix shifted, and the vocals were more audible from the house overhead speaker. You had to stand back by the bar or his croaks and screams faded behind the buzz-saw guitar. 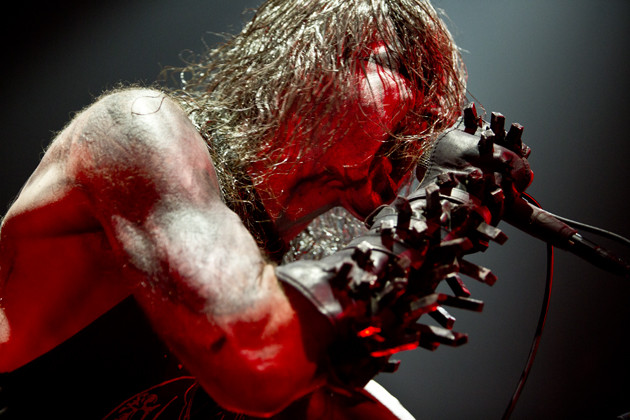 The band’s energy and intensity kept the momentum of their set flying by you, whether they were playing blast beats or not. They won the Atlanta audience over due to the fact they have a punk rawness live. Archaon handled all the guitar duties, stripping away some of the layers from the new album to give the songs a more straightforward treatment. From behind his cowl, their bassist kept the rumble going for the occasional run up the neck Archaon took, but these happened so quickly that the wall of razor-sharp sound kept its lacerating attack.

While the material from Cauldron of Chaos dominated the set, they came out and for their first three songs crammed “I Am Abomination”, “Nathicana”, and “Sculptor of Flesh” in your face.

If you have not caught these guys yet and call yourself a fan of black metal, you are doing yourself a disservice. Both bands are a must-see, as they throw every ounce of their black hearts into their performances.