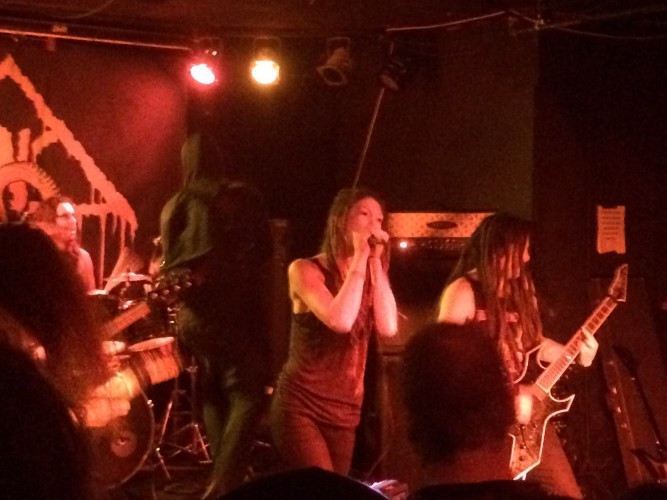 The chance to see this band from Victoria, British Columbia, was one of the main draws of Famine Fest for me. I really liked their 2015 album Ruins, and I had missed out on other chances to see them in the past. 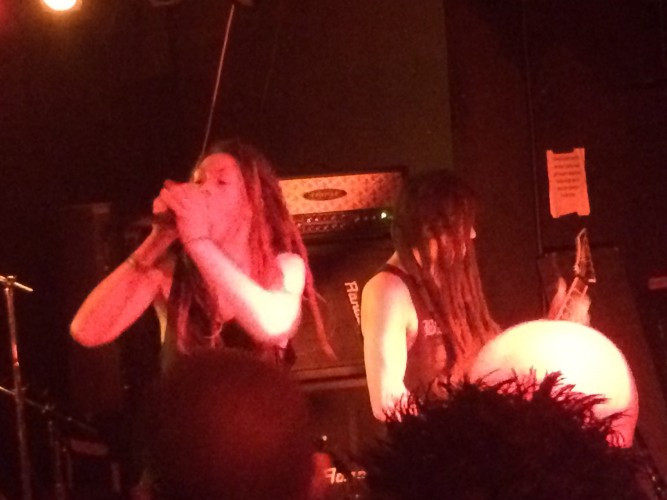 I thought they were electrifying last night, mixing the music between turbocharged combinations of crust punk and black metal and even more seething yet melodic forms of slashing and burning, such as the title track from Ruins and probably my favorite song from that album, the explosive “Predator Drone MQ-1” (which I’m an idiot for not including on our list of last year’s Most Infectious Extreme Metal Songs).

The tall, slender frontwoman Danielle has an almost elfin appearance, but there was nothing delicate about the intensity of her raw, panther-like howls. And her band-mates were firing on all cylinders, too. 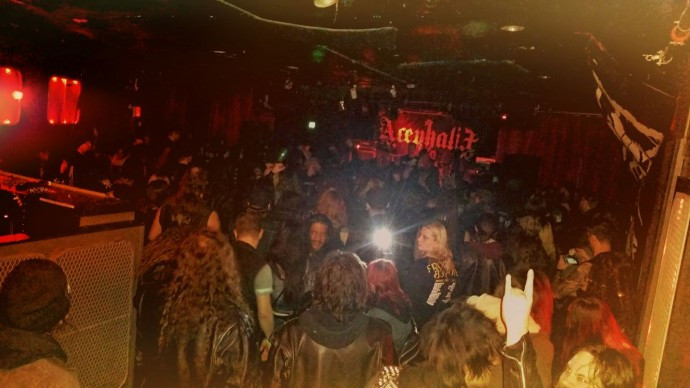 This is another band who were a prime reason for my decision to go to Famine Fest this year. They seemed to have broken up around the time of the release of 2012’s fantastic Deathless Master, but reunited last summer and are now on a short Pacific Northwest tour (they’re supposed to play Black Lodge in Seattle tonight, and you can find the other dates on their Facebook page).

I had some inkling of what I was in for when Acephalix played, but I’m not sure anything could have prepared me for the reality of it.

Apart from the band’s recorded music, which I’m addicted to (my review of Deathless Master is here), I’d seen a recent video of a live performance by Vastum, which shares vocalist Daniel Butler with Acephalix, and that gave me a clue — but I was still completely blown away. 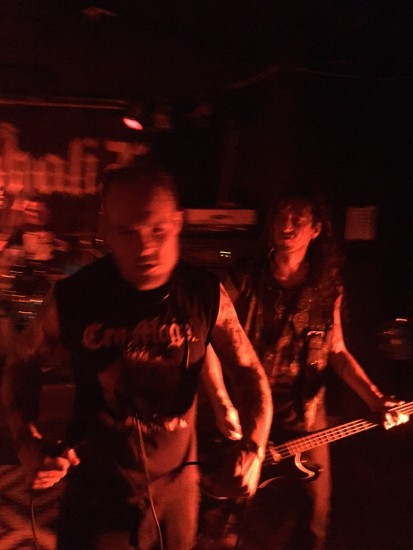 The music (a melding of death metal and crust) was incredibly powerful — skull-crushing and catchy as hell. And Butler was a goddamn force of nature. He spent as much of his time tangled up with the audience as he did on stage — crowd-surfing, moshing, stage-diving, lurching forward from the stage at precarious angles and allowing himself to be grabbed, groped, and caressed, without ever missing a beat in his delivery of savage growls and howls.

I witnessed this up-close and personal, from the densely packed, sweat-soaked second rank of people in front of the stage, where I got beat to a pulp by the people behind me, in front of me, on either side, and even from above, during the times when Butler turned himself into a human projectile.

It was so fucking cool.

We got a very late start on the festivities last night, due to a Portland friend showing Joseph and me around town with stops at the Portland City Grille for drinks and food, and the Ash Street Saloon and Shanghai Tunnel for more drinks — she made some great choices, and I had a blast. But tonight we’re going to make an effort to hit the fest earlier in the night.

With a bit of luck, I hope to have a post for you tomorrow, in addition to our weekly Rearview Mirror installment, which my comrade DGR has already written. But in the meantime, here’s some music that came my way this morning via a tip from the very same DGR. I don’t think this is exactly his kind of thing, but he correctly thought it might be mine.

The name of the band is Förfall, they’re from Sweden, and Misanthropic Generation Media released their debut EP Ingenmansland on February 9. When DGR told me about it, he wrote: “It’s kind of like d-beat punk/grind with a vocalist who is drunk? Don’t know.”

Well, all I know is that the music kicks like a mule. But it’s not only brutish and bludgeoning, it’s really dynamic and infectious as well. In addition to giving your head a vigorous battering, when the band put on the brakes they’ll drag you into a black pit of doom, degradation, and despair.

The vocalist may indeed be drunk, but drunk or sober, his vocals are as raw and inflamed as a third-degree burn, and they’re absolutely decimating.

One Response to “SEEN AND HEARD FOR A SATURDAY: FAMINE FEST (ISKRA AND ACEPHALIX),”