I figured for this Rearview column that I would take you on a shorter trip through time than we have been prone to. I know that this isn’t the shortest, as once before we made a trip to 2013 with The Amenta, but I figured that was a special-use case since we were zeroing in on such a specific section of that album.

This time, I thought we would travel all the way back to 2011, a time when No Clean Singing was actually a real website — although at the time not one I wrote for. We have a calnder at the office that refers to these years as B-DGR and A-DGR. I have noticed that someone has changed said calender to a picture of a dumpster fire, though, but I’m not sure who yet.

In coming up with this column, I felt that I needed a bit of a breather from the last couple discs I’ve been reviewing, so I wanted to try and get away from the symphonic and the satanic as much as I could, yet I found myself still staying within the same country as one of my recent reviews. 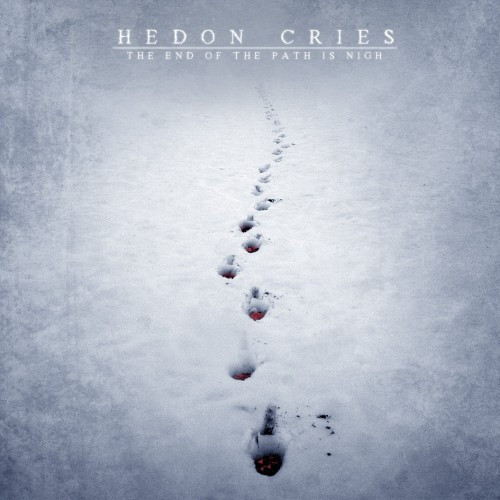 Hedon Cries hail from Greece, having been founded in 2001, and since then have put out three albums, with the last being the focus of this Sunday’s time-hop. The End Of The Path Is Nigh came out in the back-half of 2011 and was one of my first introductions to Greece’s underground melodic death/doom metal scene.

By the point in their career when Hedon Cries released this album they pretty much knew exactly what they were aiming for. A quick glance at the album art reveals a minimalist font and footprints left in the snow. A picture of snow is probably the free space in the doom metal bingo board, but the melodramatic title and the small font have to, at the very least, put somebody on the fast-track to a win in that regard.

One of the reasons why I have found myself interested in the different takes on this genre over the years is that the hybrid melodeath/doom genre has always felt like a very Scandinavian style. It has all the sort of ethereal beauty that European bands were known for, on top of the penchant for the latter-era melodeath’s quicker pacings and ear for melodies.

It is a style of music that feels like it can only be written when surrounded by a clear day after a snowstorm, when everything is frozen over. That’s why takes on the genre from places like the US and even Greece in this case have been interesting; I’ve always been interested in seeing if such bands can ascend past influence worship and mimicry into something worth listening to.

In Hedon Cries’ case, they did that for a pretty good chunk of The End Of The Path Is Nigh. In my mind there is maybe one rough listen on the disc — the song “I Hate You” — but other than that the group show a solid grasp on playing a quicker-paced doom, anchored by some very low death metal vocals.

On The End Of The Path Is Nigh, seven and a half minutes fly by like nothing on its longest song, and a huge majority of the tracks stay within a four and a half minute range, with personal favorite “Forgotten Beauty” being the only other outlier at around six minutes.

Even though I’m not the hugest fan of “I Hate You”, the four songs following it are all highlights and the two openers “Like Snow In Her Hand” and “In Deep Red” are both melancholy acts inflicted upon the listener.

Hedon Cries’ brand of melodoom at this point was a little bit faster — “Your Morbid Figure” practically starts as a death metal song — than it was on their previous efforts Hate Into Grief and Affliction’s Fiction (though Affliction has one of my favorite song titles in “The Kingdom, the Bloody Dimension and I”,) but a large part of that is owed to End Of The Path only being nine songs long. However, of those nine a solid seven of them have found their way into regular rotation for me over the past five years.

Let’s take a shorter trip this Sunday to 2011 with Hedon Cries and The End Of The Path Is Nigh.

One Response to “THE REARVIEW MIRROR (HEDON CRIES)”