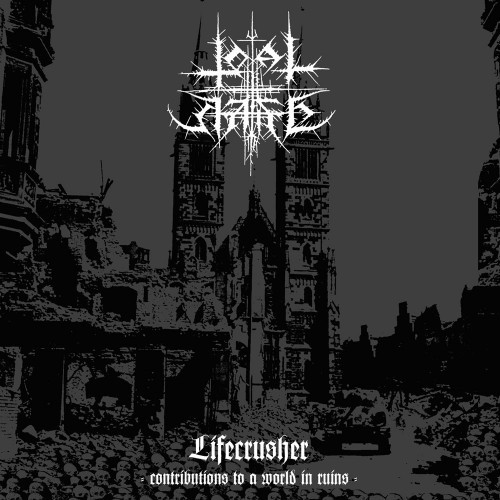 Six years have passed since the last album by Germany’s Total Hate, but on February 26 Eisenwald will release the band’s third full-length in this, the fifteenth year of the group’s existence. The title gives you fair warning of what’s to come: Lifecrusher — Contributions To A World In Ruins. And we give you the chance to experience it in full today.

With an album title like that one, brought forth by a band with a name like Total Hate, who are devoted to old school Scandinavian black metal, you expect full-bore sonic savagery. And that is indeed what Lifecrusher delivers — but that’s not all you get.

At some point in every song on the album, Total Hate erupt in a raging, white-hot fury, propelled by seething, swarming riffs and turbocharged drumming, augmented by a vocalist whose jagged shrieks sound like a deranged killer being strangled with barbed wire. It’s an intense, gripping experience, like being in the middle of a conflagration, or witnessing a black river whipped into a frothing bath of blood by piranha attacking a fresh carcass.

And if that weren’t enough to get your adrenaline flowing at maximum levels, the album includes some incinerating guitar solos that will finish the job — truly face-melting doses of acrobatic shred that will cause most metalheads to raise their claws to the skies.

There’s a lot to be said for the catharsis that comes from being exposed to such near-psychotic levels of ferocity. But Total Hate also have respect for the art of song-writing, and perhaps a feeling of mercy for listeners who would be left drained and exhausted by a non-stop torrent of such musical violence — because in addition to being savage and sinister, the songs have structure, they include dynamic changes of pace, they’re heavy, and they’re really catchy.

Consider, by way of example, “Instruments of His Wrath”. The song begins with big, compulsive riffs in a mid-paced rhythm, strong enough to get your head moving. The pace becomes even slower, and the guitar turns in a dissonant direction — and then the music erupts like a whirlwind of fire, with the thrumming bass providing a solid anchor to the high, vibrating riffs. The pace slows again, providing space for an extended spitfire solo over the music’s bleak but memorable melody. And there’s one more deranged musical melee in store before the band return where they started, with those headbang-triggering riffs.

And that’s just one example of the dynamism in these songs. Lifecrusher isn’t just a non-stop strafing run of blast-beats, double bass, and lacerating riffage. There are almost as many rock beats, d-beats, and somersaulting fills in the drum tracks as there is blasting and pummeling, and the grim melodic hooks in the songs are sharp.

You’ll notice that the last song on the album is almost 15 minutes long. It’s really not 15 minutes of music, though. Just be aware that the music does return in the track’s final couple of minutes.

3 Responses to “AN NCS ALBUM PREMIERE: TOTAL HATE — “LIFECRUSHER – CONTRIBUTIONS TO A WORLD IN RUINS””