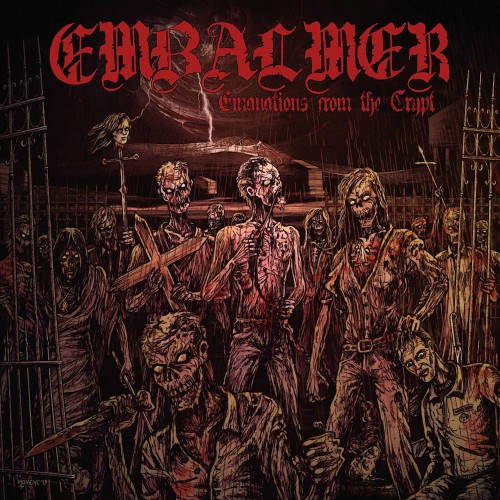 There are two ways you can think about Cleveland’s Embalmer. You can think of them as a death metal band who started in 1989 and made a name for themselves with demos like Into the Oven, Taxidermist, and Rotting Remains, and a 1995 EP entitled There Was Blood Everywhere — and then went on hiatus for nearly a decade, returning in 2006 with an album named 13 Faces of Death that even the band weren’t crazy about.

Or you can forget all that history and just think of Embalmer as a band with an album named Emanations From the Crypt coming out on April 1 that will tear your fucking head off. 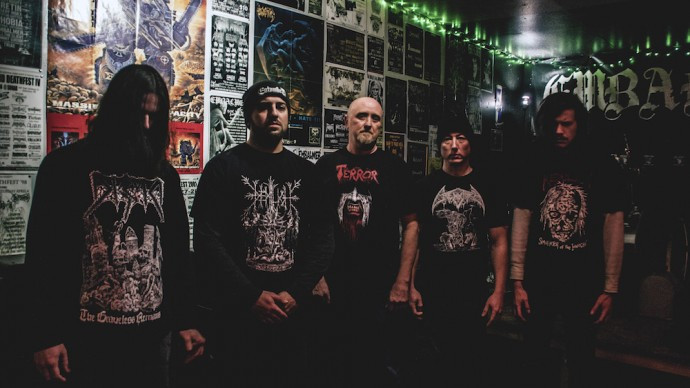 There are reasons to just focus on the here and now, apart from the fact that damned few people spend their money on music solely because it was created by a band whose name made an important mark in the history books more than 20 years ago. In Embalmer’s case, there are also a lot of new faces in the band. And of course we have to consider the possibility that because times and tastes have changed, maybe Embalmer’s style of death metal won’t have quite the same appeal.

So, let’s just focus on this one song that you’re about to hear, “The Coroners Report“. In a nutshell, it’s two and a half minutes of full-throttle, face-melting, bone-breaking explosiveness.

The music is so fast and so ferocious that I’m tempted to throw around terms like death/grind and gore/grind instead of death metal. The drumming by Roy Stewart — who has been with the band since the very early days, reportedly using the same drum kit he bought in 1988 and has used for all his recordings with the band — is a reason to hear this album all by itself. On “The Coroner Report” it alternately punches like a nail gun and hammers like a mallet.

The riffs rip and gouge and spin like a smoking bone saw. There’s a solo in the song that shrieks and moans like a living thing — and the torture implement being applied to it. And current vocalist Paul Gorefiend has clearly mastered the art of roaring, gurgling, and shrieking like a carnival of horrors.

Does it matter that the Embalmer name is attached to a storied past? Well, maybe a little. Is it worth grabbing onto this music here in 2016, with all we know and all we think we know about extreme metal in the current day? Fuck yes.

Hells Headbangers will release this new album, Emanations From the Crypt, on April 1, and you can place your orders here, where you can also check out the title track:

P.S. I’m guessing that if you listen to the Into the Oven (1991) and Taxidermist (1992) demos even today, you’ll find that they’ve stood the test of time. Hells Headbangers certainly thinks so, because plans are in the works to re-issue them on gatefold double- or triple-LP, along with unreleased recordings, photos, fliers, and other bonus materials that have recently been unearthed from the band’s earlier years.

Okay, if you read all this, it probably took you longer than it’s going to take for this song to rampage through your head. I hope it puts a charge into you as much as it did me.

8 Responses to “AN NCS PREMIERE: EMBALMER — “THE CORONERS REPORT””