It’s possible that I owe each of these two bands an apology for reviewing their new releases alongside each other. I swear I wasn’t trying to be ironic or make any mischief. It just happened that I listened to both of them back-to-back, liked them both (for somewhat different reasons), and was anxious to spill some words about them. So I’m striking while the iron is hot in my head.

When I first came across this band’s debut demo Initiation To Obscure Mysteries more than a year ago (here), I didn’t know anything about them other than the fact that they seemed to be from Greece. But that demo was an arresting experience, and I felt grateful that Iron Bonehead spread it around.

Now, a year later, Ithaqua finally have a page on Metal-Archives (along with the other bands with the same name who are not them), they seem to have attracted a following, and Iron Bonehead will again be releasing their music. This time it’s a two-song 7″ named The Black Mass Sabbath Pulse, and it’s even more impressive than the demo. 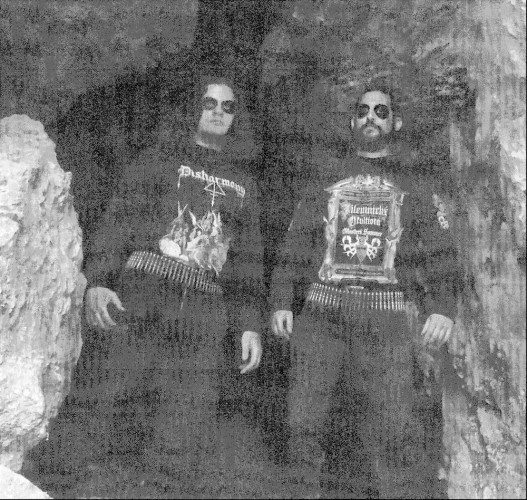 For a short release, this is home to two songs that I have no doubt will stick and stick hard. The title track bolts forward in a gallop, pausing for a little snatch of eerie guitar melody and then dropping into a canter. As you’ll hear in both songs, Ithaqua have a penchant for flickering, layered guitar melodies, and in this song they build the intensity with an urgent but highly infectious refrain. As the song cycles through its distinctive segments, Ithaqua also build the sense of an occult ritual evolving before a bonfire, complete with the sound of chants. The song includes contrasting vocals, with the high caustic ones reminding me of Agalloch’s John Haughm, and the lower ones moving into death metal territory.

“Walpurgis, The Flight of Spectral Witch” begins at a slower pace, with a flickering lead guitar and a riff that puts me in mind of classic doom. The band pick up the speed, but at the mid-point they segue into a rocking backbeat with a guitar solo that has “classic heavy metal” written all over it. As the music accelerates into another gallop, a dark, eerie keyboard melody begins to wash over the top. The riffs begin to jab and the two vocal stylings join together — the high acid ones and the lower growls — and then you get an explosion of spitfire shred. The band revisit some of the earlier segments before the song ends, reinforcing the music’s powerful attraction.

Honestly, these two songs weren’t what what I was expecting based on last year’s demo. But I can’t help feeling that this is a mission statement, and a display of burgeoning talent that’s going to have wide appeal.

The Black Mass Sabbath Pulse will be released on Walpurgis Night (April 30) 2016. 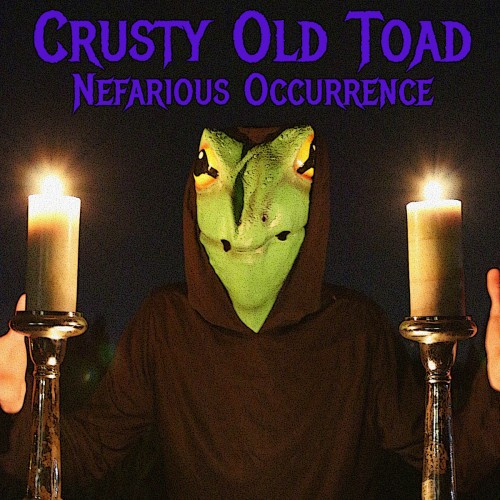 I heard about this one-man band two nights ago from my friend Joseph Schafer (Invisible Oranges), because the musician behind the project (Toaderus Crusticus) had recently written him an eye-catching e-mail about Crusty Old Toad’s debut album, Nefarious Occurrence. Even before I could start googling to find the stream, I discovered that I had also received an e-mail from the same Toaderus Crusticus.

I can’t honestly say that I would have listened to the music except for the fact that Joseph had said it was well worth hearing. I like a good joke as much as anyone, but with so much new music waiting to be heard, I tend to take a pass on bands who (at least superficially) don’t seem to take themselves seriously. In this instance, that would have been a big mistake.

In the interest of full disclosure, the jokes don’t stop with the band’s name, the musician’s name, and the album art. The lyrics, for example, include lines such as these:

From “Cryonica”:
She’ll freeze your cock with her ice-beam glare
You can beg and plead but she won’t care
Legend says earth is not where she belongs
She’s an ice witch collecting frozen schlong

From “Daydream In Hell”:
Satan, won’t you hear my plea?
This line of work is not for me
I’m a sensitive soul and I gotta be free
A competitive ice dancer is what I want to be

From “Halloween”:
The night goes on the crowd is leaner
With some luck somebody will touch my weiner
But if not, I’m not one to worry
I’ll just go home and jerk off instead

On the other hand, the song on the album that has probably hooked me the hardest (“Ashes To Fly“) includes more serious sentiments:

I’ll wait for my ashes to fly

I’ll wait for my ashes to fly

After I heard the music, I decided that Toaderus Crusticus is, as the British would say, taking the piss. No one could write or perform the songs you’ll find on this album without having a pretty deep knowledge and love of classic rock and metal, as well as more than a few years of time spent honing his skill as a guitarist. Or at least that’s my guess.

And I say that because, despite the comical/juvenile lyrics, there’s a lot of maturity reflected in these compositions and great feel in the guitar performances. All of the songs include potent melodic hooks and fantastic solos, whether the songs are hurtling along or moving at a more leisurely or more rocking pace.

The Bandcamp page for the album includes black metal and death metal as a tag, but this is far from standard black or death metal, despite the throaty growls used in the vocals. There’s only a thin veneer of distortion in the riffs, and the lead guitar tones are either warm or crystal clear. The songcraft is so good that these tunes could be crossover hits except for the fact that the artist has chosen to slap listeners in the face with ugliness in the vocals (a decision that’s a big part of my admiration for the album, just as it was for Tribulation’s latest) and… well… those lyrics. And the band name. And everything else.

Nefarious Occurrence is ridiculously infectious and beautifully performed, and deserves to be spread around and taken seriously. Hey, if a band like Slugdge can succeed despite being tongue-in-cheek mollusk worshipers, maybe there’s a path forward for a crusty old toad, too.

P.S. In addition to the Bandcamp stream of the album, I’m embedding a video play-through of the guitar solo to “Daydream in Hell”.