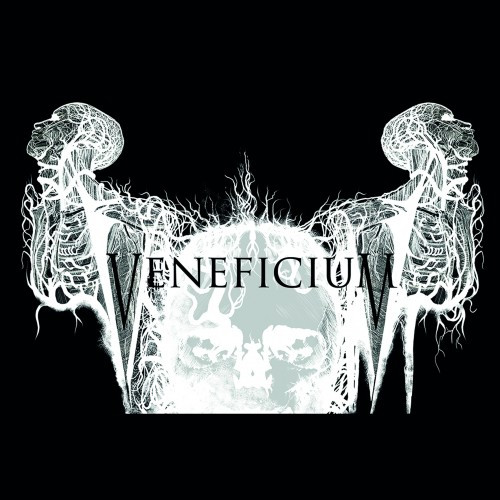 Even though we’re about to premiere a full stream of the debut self-titled demo by Veneficium, I don’t know who is in the band. They are reputed to be veterans of New Zealand’s metal underground, and that’s entirely believable because this demo is masterful at what it does. What it does is unleash a hellish cataclysm of abyssal black/death savagery — but with the kind of flair and dynamism that make this a bewitching terror.

The demo is produced in a way that gives it an immensely powerful and harrowing sound; you feel the bones in your skeleton vibrate down to your feet, and the earth beneath them seems to quake in massive tremors. Yet while the storm of distortion in the stringed instruments and the reverb effects in the vocals are what you would expect for this kind of sonic warfare, the production is perhaps surprisingly sharp; the murk is not so thick as to obscure all the interesting ingredients that make the music so riveting (and unsettling). 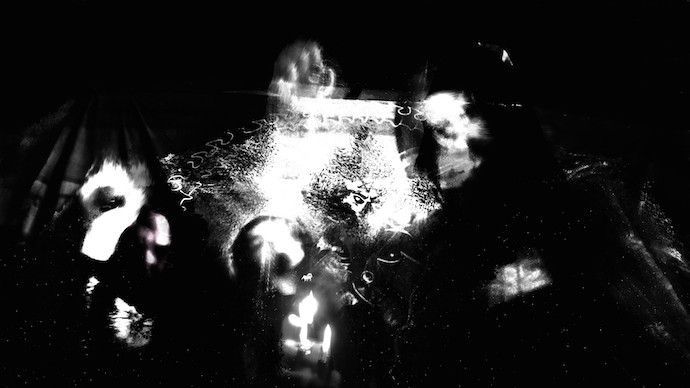 “Mefitic Exhumations” is a fitting declaration of war at the outset, launched with ferocious, radioactive riffing and cannon-blast drumming, replete with hair-raising shrieks and horrific guttural growls, the sound of which resembles a cement-mixer in overdrive. A sign of the dynamism in the song-writing comes when the onslaught slows briefly to deepen the sense of impending catastrophe, and then later shifts to a hammering, snare-driven rhythm highlighted by an eerie burst of lead guitar, followed by a phalanx of big, booming chords. The song generates an atmosphere that’s cataclysmic and utterly doomed.

A squeal of feedback announces the start of “Aggregation of Sufferings Manifest“, which progresses to the sound of huge droning chords and slow, dissonant notes against a backdrop of inhuman echoing roars. The song then erupts into a swarm of scything riffs and assaulting percussion, again followed by pile-driving chords hammering in sync with the drums. But dynamism is again a hallmark of the music as it switches to a rocking backbeat while the riffs grind and grate like a rock-crusher. While the band push the song into the red zone with one further torrent of heartless destructiveness, it ends in a lurching stomp, with the drums and chords again coming down in unison like giant mallet blows and shrieking guitar notes amplifying the music’s supernatural atmosphere.

After I heard the final song, I had to look up the word “photism”, which seems to have a dual meaning: (1) “A luminous appearance, image or subjective perception of a hallucinatory nature”; and (2) “a form of synesthesia in which a visual sensation, as of color or form, is produced by the sense of touch, hearing, etc.”

There is indeed a hallucinatory quality to “Mordant Photism Above Cathedrals of Ash“. For most of its length it’s a brutal dirge, like a staggering funeral march for the passing of a subterranean leviathan. Within the shroud of poisonous distortion and the backdrop of unhinged yells and roars, the bass assumes a prominent role, while a needling tremolo lead punctures the procession like an open wound. With a minute left, the music intensifies like a storm surge, all double-bass thunder and grisly, cyclonic riffs.

New Zealand has been home to some stand-out bands in the barbarous realm of blackened death metal, with the late, lamented Diocletian and Witchrist coming to mind first (and bands such as Vassafor and Heresiarch in the mix as well), but this new demo heralds the arrival of a new presence that demands a close watch.

Veneficium will be released on tape by Iron Bonehead Productions on March 11.

5 Responses to “AN NCS PREMIERE (AND A REVIEW): VENEFICIUM’S SELF-TITLED DEMO TAPE”