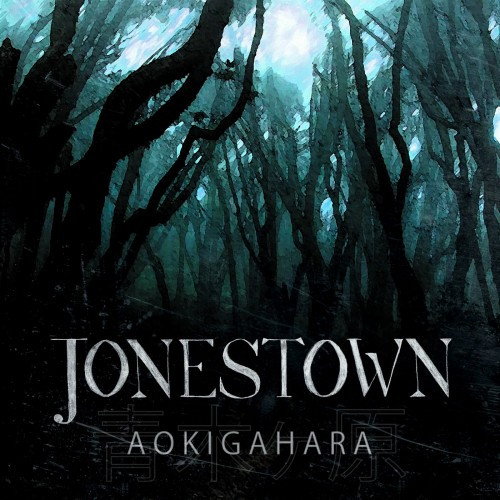 (Heres Andy Synn’s review of the new album by Jonestown, a UK band from Brighton, England.)

One of my resolutions for this year, if you can call it that, was to make more time for bands who I’ve previously checked out but who, for whatever reason, never really clicked with me. As a matter of fact I’ve got a half-written column on his very subject that I really need to get finished sometime soon…

Anyway, Brighton-based nihilists Jonestown are one such band, whose previous release, The Erebus and The Terror, definitely showed a lot of potential, but just didn’t seem to have the right x-factor to make its way into my regular rotation.

It did, however, make enough of an impression on me that when the promo for the band’s full-length debut made itself known in the NCS inbox I jumped at the chance to see if the quartet had managed to fully capitalise on the promise of their debut.

And, oh boy, did they ever. 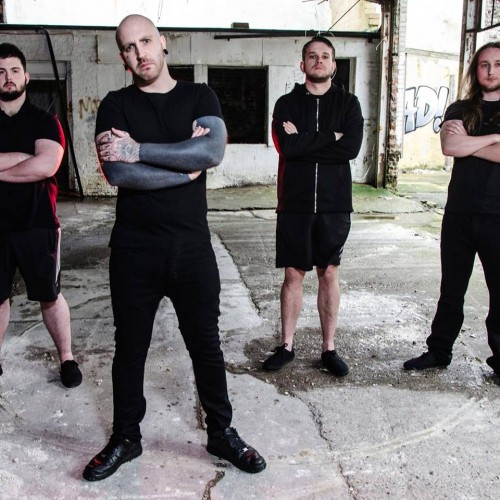 Aokigahara (named after Japan’s infamous suicide-forest, fact-fans) is an undeniably punishing affair, make no mistake, but it’s also very much an altogether smarter, more calculating form of predator than the fledgling killer of the band’s debut, delivering its audiotronic aggression in precise bursts of calculated fury designed to maximise their impact while minimising wasted energy, ensuring that every shot hits home precisely where it was intended.

Musically the album is probably best described as a more technical permutation of Death Metal/Deathcore in the vein of Whitechapel/Carnifex/Impending Doom, accentuated with prominent touches of Animals As Leaders-esque nimble frettery and a thoroughly modern, Meshugganized armour-coating, topped off with a thoroughly raw and unfettered vocal performance positively dripping with rage and contempt.

With lyrics which speak in visceral, uncompromising terms of disaffection, isolation, and mental (and physical) torment, songs like pneumatic opener “Deliverance” and the riff-packed “Cenodoxus” immediately set out the band’s modus operandi with gusto, unleashing a potent mix of low-tuned, juddering death-grooves, stuttering, high-tech riff work and machine-like, piston-powered drum patterns which seem purpose built to get necks snapping and bodies moving in an explosion of cathartic physical violence.

Though the album’s overall approach is practically one of “everything turned up to 10, all the time”, the band have clearly taken great pains to ensure that this near constant sonic battering never becomes monotonous, with the brutal-tastic “Borderline” injecting a welcome dose of melody into its second half, while the twitchy, techy “Mass Extinction Six” – despite feeling almost a little too “current” in its construction – still floats like a butterfly and stings like a three-tonne rhino, intermingling flashes of cerebral riff work and churning Death Metal power to impressive effect.

Though the title track definitely leans into the inevitable Impending Doom comparisons that the album is likely to generate, going all-in with its rubbery, stuttering, Meshuggah-tinged Deathcore sound right from the get-go, “Apres Moi” takes things in a decidedly more malevolent, more Death Metal influenced direction, both in the vocals and in the meaty, muscular riff work which dominates the track. Threaded through with some impressively dark and subtle melodic touches, and culminating in an utterly devastating finale, it’s easily one of the absolute best tracks on the album.

Aokigahara concludes with the killer pairing of “33rd Parallel” and “Deadweight”, the former of which is, arguably at least, amongst the heaviest and most technically adept of the album’s many metallic morsels, really doubling down on the more overtly Tech-Death side of the band’s repertoire (and bringing to bear some of the band’s most explosive, ballistic, riffage in the process), while the latter brings the whole gruelling, gut-wrenching affair to a suitably adrenaline-driven conclusion, complete with some wholly unexpected – but impressively well-integrated – atmospheric and melodic touches.

It’s not a perfect album by any means — occasionally the lyrics and vocals do err a bit further into melodrama than I’d like (the spoken-word interlude in “Cenodoxus” being one such example), and the whole style/sound of the album will probably be a bit too zeitgeist-friendly for some people to stomach (which is very much their loss) – but if you’re looking for something wholly unpretentious and utterly relentless, something which doesn’t pull its punches and refuses to compromise its intensity or its integrity… then look no further.