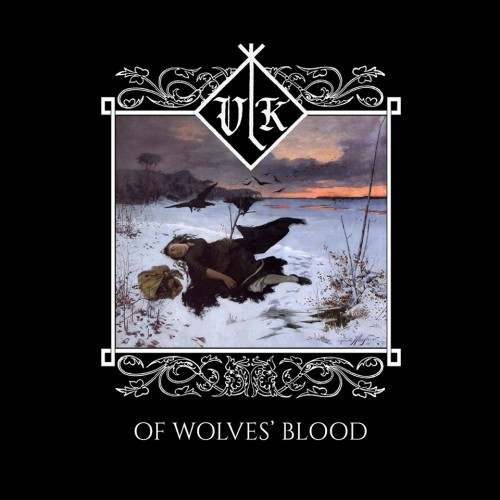 In June 2015 I came across a rough mix of song by a Chicago band named Vlk that made quite an impression, despite the fact that little information was available about the band. As I wrote then, it come across as a stripped-down fusion of punk and black metal, with a raw edge and damned catchy melodies to go along with the ugly, clawing vocals and the music’s feral energy and dynamic pacing. It rocked hard but also included segments that one might even call atmospheric, and the drumming was also interesting (and definitely not “standard” black metal blasting).

It turns out that, with a slight wording change, that track became the title song to Vlk’s forthcoming debut album, Of Wolves’ Blood, which is now due for digital and cassette release on March 21 (with the tape edition coming out via Tour de Garde). Today we happily bring you the premiere of another song from the album, a track named “With Banners Raised“.

Some of the signal ingredients of that earlier song are still present on this one — nasty vocals that seem to emanate from a throat being strangled with barbed wire; attention-grabbing drumwork that makes a gripping connection despite the absence of blasting; and rhythmic dynamism.

The guitar melodies are grim, ghostly, and dismal, and there’s a lead guitar solo that surfaces in the song’s back half that sunk its snaking tendrils into my head. The song rocks more than it rampages, but that doesn’t stop it from oozing poison from every pore. Very cool.

As noted, Of Wolves’ Blood will be out on March 21. The track list is as follows:

8 Responses to “AN NCS PREMIERE: VLK — “WITH BANNERS RAISED””