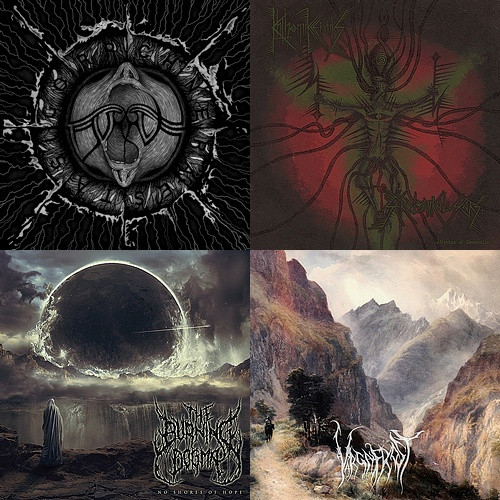 (Our Norwegian friend Gorger returns to our pages with another installment in his series recommending releases that we’ve managed to overlook. And be sure to check out Gorger’s Metal.)

Cheers one and all.

When someone decides to read a book for the very first time, they typically check out the number of pages, before exchanging the 500-page monolith for a seemingly easier 200-page thing.

Likewise, when I do my daily surf, I might occasionally bypass long write-ups, simply because of my busy schedual, laziness, lack of concentration, or whatever.

It’s been far too long since my last post here, so I’ll shorten down my rambling a little bit in favour of both my and your lethargy.

PPS or PSS or what the fuck: Social media is no fun. Social media endanger the life and happiness of millions. I appeal in particular to the youth of today. Stop the madness. There are better things in life. Thus, no FakeBook links added on my hand. (Yes, I’m a sloth, but at least I bothered finding and mistreating that quote). 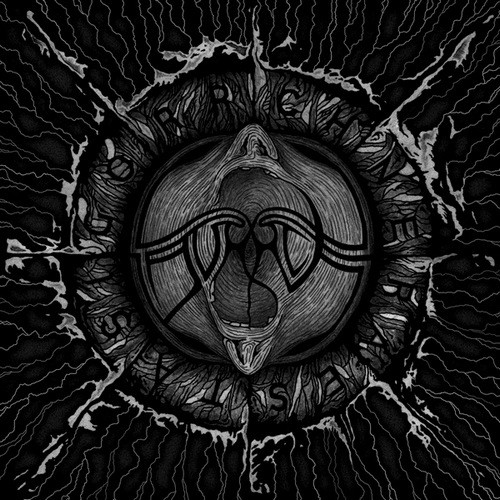 Gorrch has not been presented on NCS before, but a loyal commenter you know as 365chaosriddendays has mentioned this album in both an extensive Most Infectious Songs suggestion list and an equally long list among the Readers’ Lists Of The Year. I’ve mentioned it myself in a comment in connection with the amazing Serpent Lair album. So, What’s the storm in a teacup fuzz all about?

Gorrch’s black metal is like a fire development in a chemical factory; a frantic, dirty, and polluting inferno which nevertheless explodes like fireworks in colourful effects. The music is intense, atonal, and furious, yet intricate and swirling like a tornado.

Frenetic drums crackle at an inhuman pace, but add abrupt transitions and clever variation. The vocals spit and hiss in unforgivable disgust and chant his infamous doctrine. The guitar riffs are as monotonous as an institutionalized patient rocking back and forth in a corner of a filthy white hallway of the asylum, while high-pitched guitar strings swirl as aggressive wasps.

Even the quietest sequences sound anguished and uncomfortable, something that becomes particularly evident in the title track.

If you’re into Deathspell Omega, late Mayhem, Outre, Au-Dessus, Non Opus Dei, et al., you know what to do.

PS: In said comment thread, blend77 (another faithful commenter) informed me of another band made out by this Italian duo. Inverted plays death metal, and you’d be wise to check out their The Age of Harvest too.

Nera Estasi was released by Duplicate Records on January 11th. 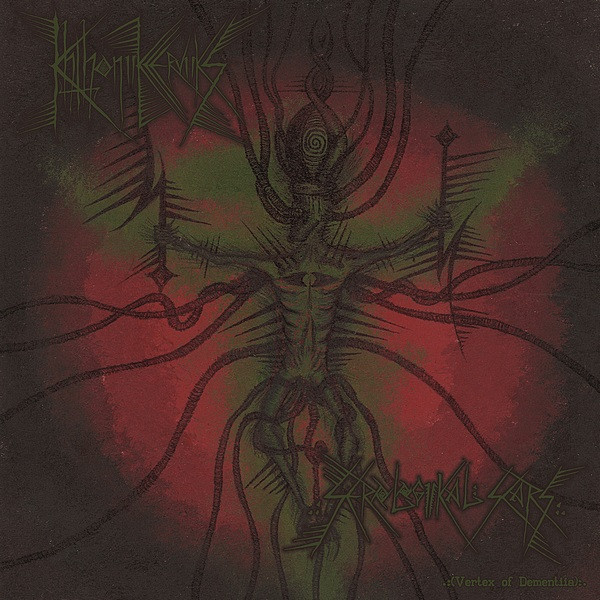 Khthoniik Cerviiks has not passed underneath Islander’s fine-tuned radar; in fact, he picked up on it even before it was released. Ergo, SeroLogiikal Scars (Vertex of Dementiia) was covered without any new music. I intend to correct that. But first, some gibberish. You know you want it, honey.

If you visit the link above, please re-visit Ur Draugr in the process. With Hunger Undying is killer!

Islander’s words are accompanied by some music, though, namely a stream for their 2014 demo Heptaëdrone, which I know some of you brutes enjoyed. I really didn’t. Not that much, anyway. The band has cleaned up their musical expression considerably, but the trio has retained a portion of infernal turmoil. Still, the music has a far more uncluttered and orderly style and a clearer direction. It’s otherwise a natural and positive development from the demo-level to professional artistry.

The music is like a glimpse into an ethereal plane, summoned by a secret, ancient ritual. As in a dream, or perhaps a nightmare, the distorted melodies conjure up visions of deep red spiralling cloud formations, blitzing lightnings, swirling winds, circling ravens, and an ominous sense of something evil afoot.

SeroLogiikal Scars… was released by Iron Bonehead on January 5th. 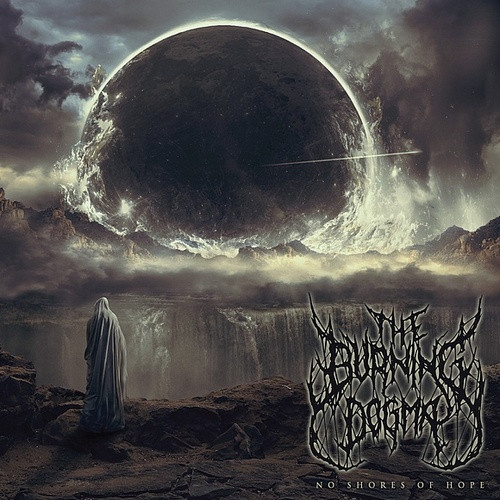 THE BURNING DOGMA – NO SHORES OF HOPE

Behind a marvellous cover art, and a to-me unknown band name, I find exciting music that won’t keep quiet within a single musical pigeonhole. The music has aggression taken from brutal death metal, melodies adapted to a melodic approach, a technical aspect that’s borrowed from tech-death, and some more industrial and electronic elements. A moderate flirtation with symphonic structures, a bit like Cradle of Filth, albeit without orchestral instruments, and a hint of modern core/djent riffs & rhythms, also sneak aboard. Something moves even beyond my preference, but still manages to impress, for the music is as elaborate as the artwork.

The band may become rather candy-coated at times, as in “Skies of Grey”, but mostly they focus on good and heavy melodies with fairly dark moods. Transitions and style changes are frequent, but natural. Take “The Breach” for example. From the three-minute mark we find a fast rhythm toward the edge of the cliff. When the gallop stops, a sequence of free-fall takes over, before wings are unfolded, and a soaring flight into the electric skies is launched.

The techno-elements that come into play are used far from exaggeratedly, but rather provide a stylish effect. What really elevates the band, though, along with the expertise related to the actual composing, are the guitars. The two guitarists are technically competent, and deliver oodles of wonderful guitar works between different musical frolics.

The Metal Archives defines the band as death/doom. Despite strong influence of the style in parts of, for example, “Dawn Yet To Come pt.2”, it hadn’t even cross my mind to take that classification into consideration. The Burning Dogma deliver varied and vital “dark metal”, where tempo, intensity, and integration of various inspirations varies vigorously. Technically, all of the incorporated stuff shouldn’t appeal to me, but I think the Italians have executed it all superbly and qualitatively. The result of such a distinct mixture is also a rather original mixture. Bold and mesmerizing.

After ten years of existence, the Italian sextet The Burning Dogma are ready to launch their first full-length. Forget genre conventions and musical biases! Clear your mind and meet No Shores Of Hope with an open mind, and you will discover a somewhat different, but quite beautiful world.

No Shores Of Hope was released by Sliptrick Records on February 12th.

Unless you’re into Spotify, all I got is this short trailer and a stream of the most soppy song of the whole album, containing clean female song, no less. I’m sorry about that. 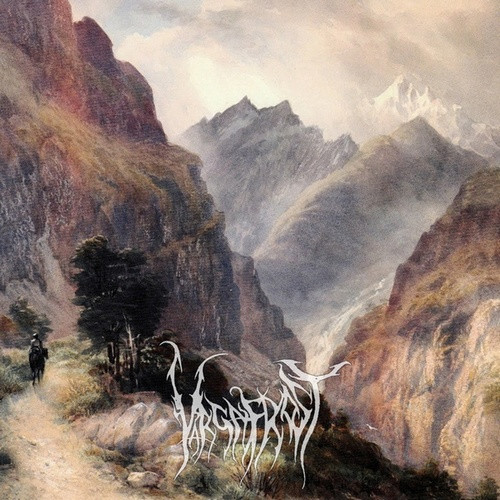 Ah, back to a bit more barbaric territories. From New Zealand this time.

The Kiwis deliver black, aggressive metal with a heathen touch of pagan metal. The first thing that catches my attention in the sound. Aside from an acoustic sequence, fierce riffing, thunderous drums and rasping, snarling vocals prevail. The music has the drift and momentum of a torpedo, and as much explosive force on impact.

The guitar sound is rich and biting as a buzzing circular saw. The drums are punchy and powerful as shock grenades. The bass is pounding, like bombshells striking targets not far away. The sound is generally massive and deafening, whilst details are to a degree distinct, particularly in the percussion. One of the cymbals, for instance, seems to be mounted right next to my left ear, especially in “Odin’s Sacrifice” and “Thursmegin”. Surely, some clamoring uproar is bound to happen when four ferocious Kiwis try to drown each other, but for this style, that’s highly flattering.

It’s the reckless downpour, with fierce and rapid parts, and sequences with groovy touch and moderate folk-moods, performed with hefty drive and juicy sound, that gives me a satanic grin when Vargafrost kicks off. This is vehement and diabolical metal with thrust that hits me like a ton of bricks. To nitpick slightly, even if NCS ain’t the place for such, the song material could have been stronger, and the duration rendered down somewhat. But hey, fuck it, it’s headbanger friendly, alright?

Honour, Blood, Spirit and Love can be downloaded in exchange for a a voluntary financial sacrifice by clicking that little logo in the top right corner of the player below.

Honour, Blood, Spirit and Love was released by Naturmacht Productions on February 2end.

4 Responses to “BENEATH THE NCS RADAR (PART 8)”