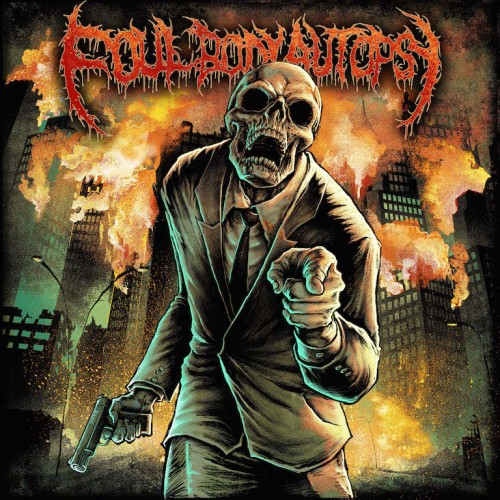 If I had to hazard a guess, I would say that the year 2016 is going to be a heavy year for deathgrind for me. Given the political nature of this year, my acceptance of humanity is going to be lying at an all-time low up until I see that number at the end of the year shift from a six to a seven.

This may be me projecting, but I get the feeling that quite a few of us are going to need a healthy dose of music with a certain amount of disdain in its mix to get through this year’s shit show.

Given that, it is nice to see that quite a few bands have made sure that my music player will at least be stocked. Between W R I T H E, Distaste/Rotten Cold, Gadget, Rotten Sound, and now Foul Body Autopsy, it is good to know that there are at least some kindred spirits who are wishing for total annihilation at this moment and will at least be delivering it in sonic form. If  there were ever a time when the world needed something from Misery Index — this year would be it. 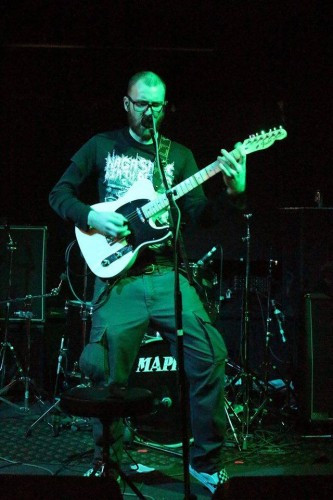 Foul Body Autopsy, a lone-musician project that takes its name from a Necrophagist song and is based out of UK, founded by musician Tom Reynolds, is one that we haven’t really posted about since the project’s full-length release of a self-titled back in 2013. Since that time, Foul Body Autopsy has released two EP’s: One in 2014 that is tenderly titled So Close To Complete Dehumanization and the one we’ll be covering today, 2016’s late-February release Perpetuated By Greed.

See what I mean about how this is going to be a good deathgrind year?

Perpetuated By Greed is the sort of EP that feels like it was written in one solid, angry burst. Each song on Perpetuated flows into the other and has the effect of making it feel like one solid fifteen-minute blast of music. Like most grind albums, the songs come nowhere close to the three-minute mark except for the album closer, and the opening track is almost misleading with its two-minute runtime when you consider that a full minute of it is dedicated to a movie sample and some vicious feedback to open up affairs.

Foul Body Autopsy moves quick, and the songs are reflective of that. I’m not sure how one would plan to extend the thirty-five second furnace of “Devoid Of Humanity” because it manages to serve its purpose in those thirty-five seconds.

When the doubled-over vocals kick in at the twenty-second mark and carry on all the way to the end, you know that the song is coming to a close, but the thirty-five seconds of “Devoid Of Humanity” can have the same effect as some of the endurance-test songs out there that reach well into the ten-minute mark. It is almost surgical in its precision, despite the sense that Foul Body Autopsy thinks that an indiscriminate wall of fire might be the best way to purge existence.

“Chewed Up By The Machine” is another quicker, almost thrash-metal number in its opening seconds before Tom’s grunted vocals sheer away all sense of niceties within. That actually tends to be the overarching theme for a good chunk of Perpetuated By Greed. Songs will start as quick-moving thrash numbers before rapidly becoming death metal tracks, or just descending into grindcore violence.

The death grunted vocals wouldn’t be out of place in a brutal death band or a heavier -core act. As the songs go crashing into one another across Perpetuated, the EP starts to feel like a monster movie wherein the gigantic creature is just throwing vehicles into buildings and we get to hear the collisions as the start of each song. 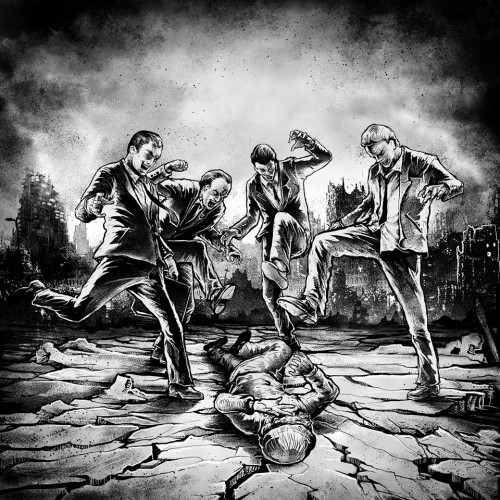 Due to the singular creative burst nature of Perpetuated By Greed, a few songs feel like fraternal twins of each other. There are differences among them, but there’s definitely a few motifs that find themselves repeated over and over throughout this EP’s run.

Foul Body Autopsy is a huge fan of the quickly-picked, call-and-response style riff, and you can hear the quick hammering of notes at the end of each riff. It actually gives Foul Body Autopsy something of a thrash influence, as I mentioned above in the context of “Chewed Up By The Machine”.

The title track “Perpetuated By Greed” is one of those songs that almost defines the whole EP, though, as in the minute and handful of seconds or so in which there is actual music, you will hear pieces of it picked out and placed into other songs as if a demented architect has been assembling a building out of a previously collapsed structure. “Perpetuated”, for instance, has multiple segments that feel like they are resurfacing in a hefty bit of its follower, “Enslaved The Rest Of Creation”.

The one track that really pulls itself apart from the burning husk that is the Perpetuated By Greed EP is the closing track, “Complete Environmental Collapse”. It opens with a mid-tempo groove, but then seeks to reunify itself with its tracklist brethren once things get kicked into high gear — which is the moment when you sense that this whole EP was written as one violent expulsion of sound.

“Complete Environmental Collapse” is the purifier of this EP, though, since it has the longest track time; by its very nature it becomes the song in which the listener’s face is held to the fire the longest. It summarizes everything said, both musically and lyrically, across Perpetuated By Greed, a monstrous closer that helps tie together everything. The somewhat EKG-esque closing bit is fantastic.

Perpetuated By Greed is a quick hellstorm of sound. It comes out of nowhere, and despite it being written as an indiscriminate firebomb, it is almost surgical in how quickly it strikes and gets the hell out of Dodge. It’s a forecast of the apocalypse that Foul Body Autopsy feels the world needs, and that comes through in each of its six songs.

Over these six tracks, Foul Body Autopsy does its best to cleanse the Earth by sheer force of quick-fire guitar riffs, hammering drum sections with some serious cymbal abuse, and a heaping helping of doubled-over vocals that make Tom sound like a choir of voices chanting for destruction.

If you have a handful of minutes and are looking for a quick fix of something new, Foul Body Autopsy will leave one hell of an imprint — like a shadow burned into concrete — on you.

One Response to “SHORT BUT SWEET: FOUL BODY AUTOPSY — “PERPETUATED BY GREED””