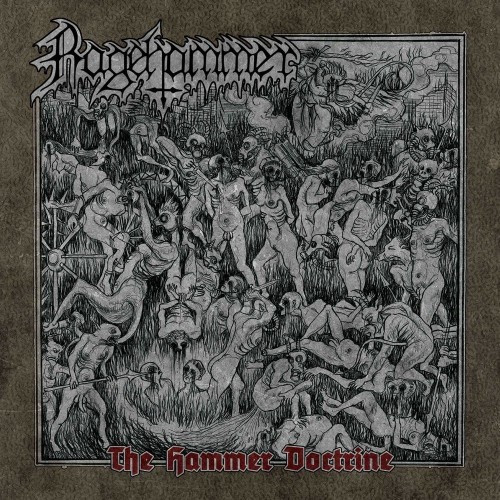 I’m going to give you fair warning: Before you listen to The Hammer Doctrine, you need seat belts on and a shoulder harness strapped down. A crash helmet and an oxygen mask would also be good ideas. And if you’ve got access to a defibrillator and a friend who knows how to use it, you may be glad to have them close by, too. Because this album is as vicious as a rabid dog and flies somewhere between the speed of a jet fighter and the pace of a ballistic missile reaching escape velocity.

The Hammer Doctrine is the debut album from Poland’s Ragehammer, and in advance of its April 8 release by Pagan Records we’re giving you the chance to have your face seared off by it (I forgot to mention that you’ll also want to be wearing an asbestos mask before you press play).

Seriously, Ragehammer are really fast — the technical skill and dexterity of all the musicians is close to jaw-dropping, and the vocalist spits words (in venomous snarls and blistering shrieks) as fast as his bandmates assault their instruments. And their taste in music, which gives them free reign to blaze away like a furnace, favors blackened thrash and speed metal. You really don’t get any chance to catch your breath as this album careens ahead until you reach a breakdown on the fourth track (“Warlord’s Fall”) — but when you hit that point you may be headbanging too hard to gulp air anyway. 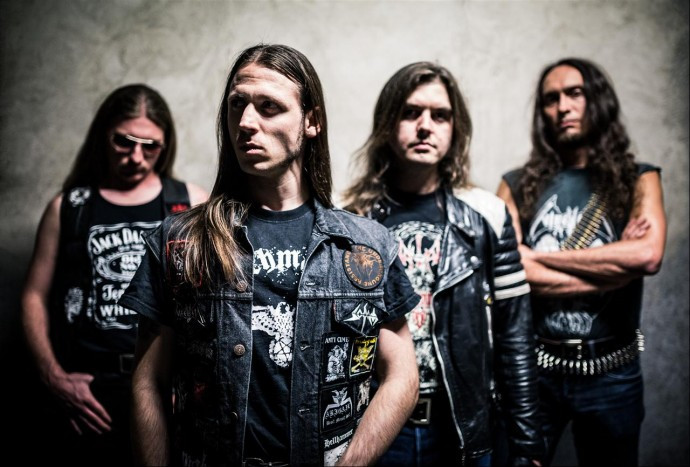 In addition to having impressive instrumental chops at all positions, the band also have a clear talent for writing virally infectious hooks, and that helps keep the album from exhausting you by the time you reach the end. And although all the songs hurtle along in the red zone, they’re not simply clones of each other. At times the band venture close to death/thrash territory with bone-grinding low-end power, and that “Warlord’s Fall” track segues into a bouncing rhythm that may put you in mind of an infernal carnival. “Knives” comes close to straight-ahead carnivorous black metal before swinging into a rocking backbeat, while there’s a segment of “I Am Tyrant” that seems like a whirling dance.

But the real meat of this smorgasbord is a mix of hate-filled, punk-laced speed metal and head-spinning thrash, executed at such a high level that it’s the kind of sulphurous thrill ride made to order for lovers of satanic velocity.  Remember my cautionary warnings, and hit play below.

The Hammer Doctrine was recorded at No Solace Studio and was mixed and mastered by M. of Mgła fame. The artwork was created by Robert A. von Ritter (Outre, Bloodthirst, In Twilight’s Embrace), and Kontamination Design (Blaze of Perdition, Bloodthirst, Voidhanger, etc.) handled the graphic design for the rest of the album.

The album will be released through Pagan Records in CD and digital formats, and you can pre-order it here:

9 Responses to “AN NCS ALBUM PREMIERE: RAGEHAMMER — “THE HAMMER DOCTRINE””