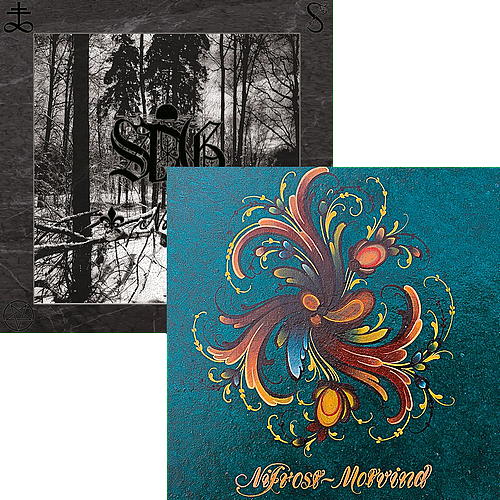 (Our contributor from Norway, Gorger, is back with the tenth edition of his series recommending releases that we’ve managed to overlook. To find more of his discoveries, visit Gorger’s Metal.)

My last installment contained 6 releases. This time I only present two. They are longer, and hopefully a bit more in depth.

Both consist of what I like to refer to as regional flavours.

The first one takes you through the fjords and up the mountainside to meet a debuting Norwegian act.

The second bulletin takes you to French Canada, and a band I’m sure many of you have encountered before. 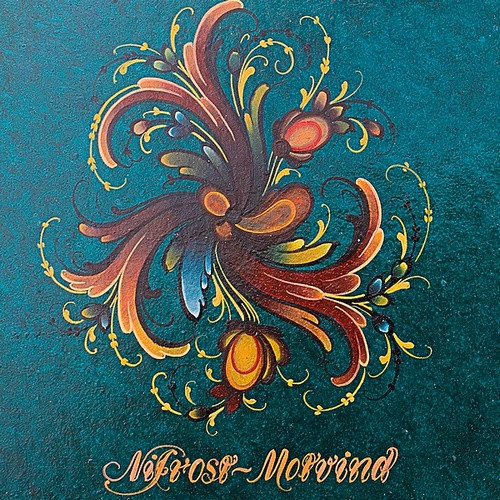 It was in fact not the spectacular cover that triggered my curiosity when I discovered Nifrost. It was actually my better half who made the finding and with sadistic delight forced me to guess, based solely on listening. I quickly picked up that this was Norwegian, and something in the melodic black metal and vocals pretty soon revealed vibes that led me in between vast fjords and majestic mountains. But… as none of the monikers I rattled off did measure up, I eventually had to hoist up the white towel. I would never have managed to guess Nifrost anyway. It was about as impossible as guessing that the little gnome in the woods was named Rumpelstiltskin.

The quartet from Jølster in Sogn has admittedly played together for over ten years, but they’ve kept their heads cool and waited until time was ripe. Patience can be quite an ordeal, but when the final pieces of the jigsaw are finally puzzled together, it’s also a virtue that lets one reap the rewards. I would never have guessed that this was a debut either, although good debuts do pop up now and then.

My first impulse is to call this Sogna-metal. I don’t know how widespread this Norwegian designation is amongst English speaking metalheads. Windir founder Valfar came up with the term, named after his village and county primarily to mark the musical difference between his folk/viking approach and the more (in)famous TNBM. Nifrost chooses to use the phrase folkloric black metal. It’s likely to have a broader international appeal. Nifrost might also like to stand out from the crowd themselves. However, just like the very first front line of Norwegian black metal bands, I feel that most blackened metal bands with folk-influenced melodic tunes and slight Viking aesthetics from this archetypal postcard-picture area have succeeded in creating their unique expression. 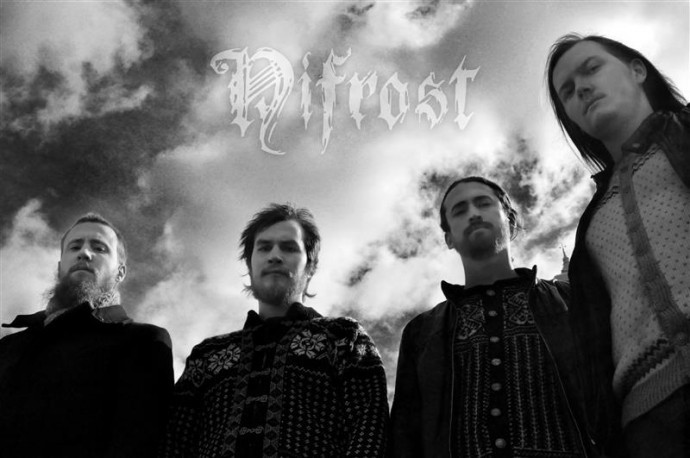 Nifrost sounds like sogna metal, heart and soul. Not that I’m complaining. The style is familiar, and the band don’t score any points on originality. Still, the genre is geographically narrow, although there are examples of similarities even abroad. Noctem Cursis might serve as an examples, and Gladius Sky even more so. The style, however, hasn’t fostered so many albums that I fear loads of generic mass productions any time soon.

The ten songs we find on Motvind (Headwind) are five years old, but the band has chosen to wait for the opportunity to do a proper recording. A smart move, for this album sounds surprisingly professional. The band has tried a few times before, but they weren’t satisfied with the result, so they’ve retried until they were pleased. The sound is more or less constantly loud. Not too loud, but close. The dynamic range meter only goes to DR5, at times touching upon DR6. It can be a bit intense in some sequences, giving an ìimplodingî effect where the music kind of drowns itself a bit. This is still not a widespread problem. Mostly, the album actually sounds very good. The production has highlighted favourable aspects in the mix, making acoustic strumming and finger picking, for example, come into their own. Also, the rich and prominent bass is just magnificent. All in all, this is probably one of the better debuts within the genre when it comes to sound.

While the music has a strong sense of local flare, these songs stand on their own two feet, so to speak, and the dynamics of the song material are very good. The melodies the band has come up with are splendid, although the album features less immortal classics than Windir in particular offered. The alternation between sequences of intensity and mid-tempo or toned-down expression works perfectly, and the songs have the drift and progress of rough waters when springtime forces snow to melt in the mountains. The songs have continuous advancement, and work well together, while having their own personal whims. Much like the seven dwarves, in other words. Admittedly, each and every segment ain’t equally lively and exciting, but all in all, the songs are strong.

The riffing is sometimes hasty and angry, often accompanied by a fiery vocal located in front of the mix. The scraping hoarse shrieks are just raven black enough to let occasional words be deciphered, and (for a Norwegian) the distinct dialect of said area is unmistakable. Another vocal form we find a lot of is a manly chorus, which colours the expression just as picturesquely as tole painting (aka rosemaling.)

Those who enjoy obvious reference bands like Windir, Vreid, Sigtyr, Mistyr, Feigd, Cor Scorpii, Ulcus (Molle), et al.. will surely appreciate Nifrost as well. The band is, however, as I’ve already mentioned, no carbon copy. Some of the melody lines are absolutely brilliant. The title-track, which concludes a delightful album, is a magnificent masterpiece from start to finish. These apprentices have thus earned their diplomas.

The band has finally completed 55 minutes of music, and released the marvel on their own label. I reckon they’ve carved out a number of new melodies and riffs, considering the five years that have passed since this material was conceived, and the wait will hopefully not take too long before more material is available. With a bit of buzz here and there, chances are some label reaches out to take this rustic band under its dirty wings.

Nifrost delivers a very good start, and the band will be exciting to follow in years to come.

Motvind was released by their own Orkja Produksjonar on January 15th. I have just learned that the band has inked a deal with Naturmacht Productions, which is coincidentally the very first label I started receiving promos from. I’m happy for both parts! 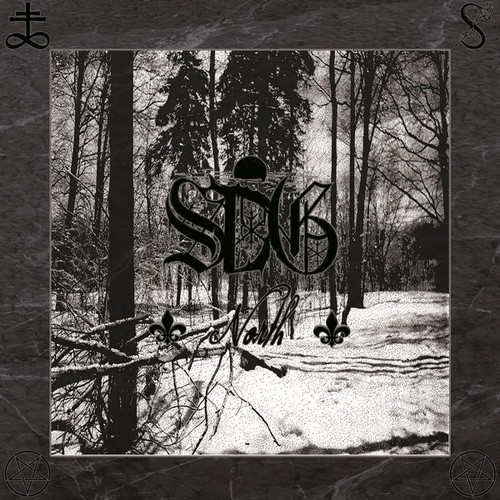 National borders are not to be found on the metal map, and neighbouring feuds have been toned down since metal’s black sheep brought misanthropy and hostility, and put the last nail in the coffin for metal’s brotherhood in the nineties. Some minor territorial disputes may exist, but first and foremost we are fortunate to have something we can call regional flavors.

Norway, Sweden, France, Iceland, and Greece, in particular, steal a lot of the attention, but no true necro-orthodox heathens should even think of omitting Canada’s “French Quarter” from the equation.

The province of Quebec has a few hundred active black metal bands to offer. How many who swear to Québécois métal de noir is another matter. At least, it’s been a while since I last discussed black metal with Quebec’s distinctive bouquet. Hardly anything during the timespan of which I’ve been translating my reviews. (Only Grimoire, which didn’t really have the same odour, and Ether, which just didn’t sit very well with me).

Sorcier des Glaces‘ compositions have always been characterized by beautiful but gloomy atmospheric moods, yet executed with harsh, razor-sharp, raspy guitars and rasping hateful vocals that create extra eeriness. The band defines their own style as Cold Primitive Metal.

North opens melancholic and lofty before gritty and distorted signature guitars makes their entrance. As always, the band masters the delicate balance between the atmospheric and necrotic, the primitive and the professional.

Sébastien Robitaille handles bass, guitar and vocals in cold and dismal ways, while Luc Gaulin in seasoned manners takes care of the somewhat intricate percussion. To pick out just one song that really conveys the duo’s ability to compose good songs turns out to be just as difficult as it is unnecessary. One song after the other displays soaring moods that rise above the majestic snow-covered forests and mountains, while a dystopian feeling at the same time resounds from crevices and gaps in the mountains. Something that song titles “(To the) Snow-Crowned Mountains” and “Dawn of the Apocalypse” can testify to. 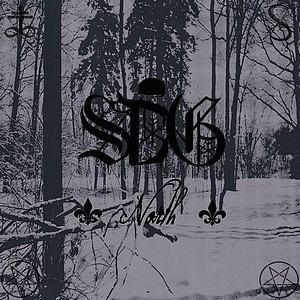 Necrotic and primitive sound after year 2k often sounds feigned, but in the hands of Quebec’s elite, with bands like Forteresse, Sombres ForÍts, Neige Et Noirceur, Csejthe, and of course Sorcier des Glaces in the forefront, it sounds credible and authentic. A European band that probably unintentionally have touched upon some of the same is German Nocte Obducta on their marvellous Schwarzmetall (Ein Primitives Zwischenspiel).

North’s magnum opus (closely followed by the first two songs, and “Dawn of the Apocalypse”), is the over-eight-minutes-long title track. After a few minutes of introductory playing, the instruments are toned down, allowing for beautiful moods, before the vocals come in. The only item more sharp and rasping than the guitar is the vocals, performed with frozen blue lips and a frosty breath of sea smoke. When the words “In A Land, Where Darkness Rises – In A Land, Where The Dawn Comes In Black – In The North, In The Kingdom Of Eternal Frost” reverberates between icy rock faÁades, a pristine vista of ice and snow comes into sight. So beautiful a view to behold, so unmercifully fatal a chill to be exposed to.

For the penultimate song, Sorcier des Glaces so fittingly wrap the Obtained Enslavement song “Witchcraft” in a layer of ice crystals.

Sorcier des Glaces, or sorcerers of ice in English, now set out to freeze our celestial sphere with their fifth album, or sixth if we count Snowland MMXII, the becomingly improved remake of the debut.

It’s tempting to enthusiastically conclude that the Canadians have outdone themselves, but one should not underestimate their earlier exploits either. Yet that’s how I feel right now, that both majestic and chilling song-material, professional performance and dirty sound with solid thrust, fits like a knuckle buster. And just to mention it, no synthesizers were used (nor harmed) in the recording and production of North. This is an epitome when it comes to illustrating that atmospheric back walls can be created with just guitar and bass. Quite a few ’90s releases could have learned from this, but I guess it’s a wee bit late now.

The lion’s share works excellently on North, but not every song and fraction holds the same high calibre. Especially “La Noirceur éternelle” and “Storming from Beyond” take a back-seat in terms of splendour. Therefore “only” a strong five of six points to a magnificent, stalwart, mighty and hypnotic album.

Sorcier des Glaces has been mentioned on NCS before, when regular visitor SurgicalBrute brought a list of kick-ass releases ov 2014.

North was released by Obscure Abhorrence Productions on February 29th.